My path to my first marathon 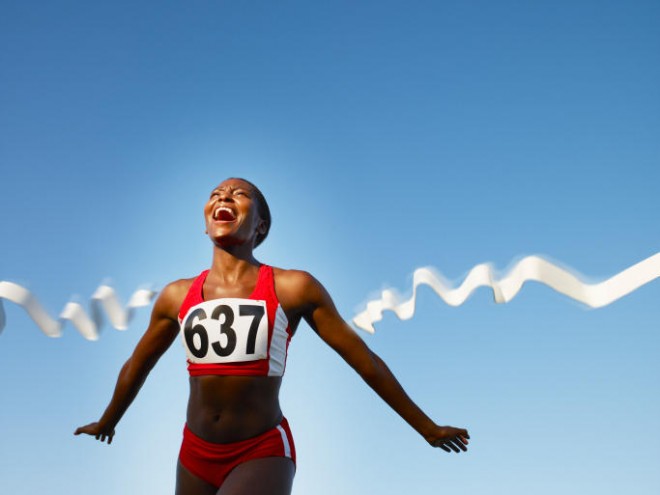 Somewhere along the 42.2-kilometre route, I no longer cared who was kicking my butt. Or that my feet hurt, my legs throbbed, and I had a twinge in my back.

The finish line of my first marathon was in sight. Finally.

“You?” My friends had responded when I mentioned that I was going to run a marathon.

I was definitely not an athlete. Although I had desperately wanted to be one: I had a long history of checking the sheet posted on the gymnasium door – listing those girls who’d made the volleyball team. The basketball team. Track. Even cheerleading. I’d tried out for every team my elementary school offered, but not once was “Leslie Garrett” nestled there among the smug Gs.

By high school, I didn’t even bother to try out. But how I envied those girls: The ones who effortlessly made every team. The ones who had trophies – real trophies! – on their bedroom bookshelves. With a dozen pictures of themselves in the yearbook. My report cards were full of As and Bs, but I could always count on a C in phys. ed.

Which is why, in my 30th year of non-athleticism, deciding to run a marathon was ludicrous. I wasn’t an athlete. Sure I’d been running since high school, but that was late at night when no one could see. It was mostly to combat a growing addiction to cookie dough. It was about waist lines, not finish lines. A marathon? Just who did I think I was?

I joined a running group, nervous as hell and praying to God no one spotted me as a fraud and demanded that I produce a team jacket. Or trophy. Or quiz me on the standard distance of a high school cross-country race. Each week, I showed up, and my terror slowly gave way to run-of-the-mill anxiety. Each time I wasn’t last seemed like a triumph. As I completed our increasingly long training runs, I felt a little less like a phony. On my own, I logged mile after mile, running at dawn to beat the sweltering summer heat.

Race day came. I was as physically ready as I was ever going to be. I’d worked hard. I’d cross-trained. I’d even given up cookie dough. I set my pace and kept it, trying to ignore the fact that a 72-year-old stroke survivor was keeping pace with me. I chatted with him, mostly to keep myself from focusing on my pain.

At some point, I passed him. Or maybe he passed me. No matter, there was the finish line. No matter that many, many (but not all) runners had already crossed it. I found the energy to sprint the final 150 feet.

I had run 42.2 kilometres on my own two feet. It was something only an athlete could have done.