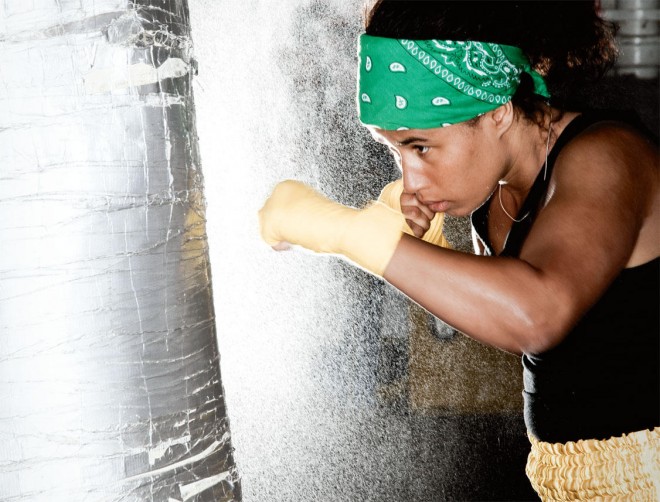 The martial arts student spars with her opponent. She keeps one fist up, at face level, for defence and attacks with the other — fast cross-body punches: right, right, left, right, right, left. She knees her opponent, hard. Then she delivers another right cross-body blow, followed by a left jab. She has a beautiful face with smiling eyes, tasteful makeup, a crown of lovely flaxen hair. She doesn’t have the face of a fighter.

Leslie Snitman is one of an increasing number of women of all ages embracing mixed martial arts (MMA) — the sport behind the UFC phenomenon.

If you’ve heard of ultimate fighting — the newer, more violent incarnation of wrestling also known as UFC — you probably know it divides people. It presents MMA in its rawest form: a violent combat sport that pits two opponents against each other . The fighters are skilled in two or more disciplines that include boxing, wrestling, Brazilian jiu-jitsu, muay thai kick-boxing, karate, judo and tae kwon do. The goal? To win the bout either by knocking out one’s opponent or by using a submission hold to force the opponent to “tap out,” or admit defeat. Blood is a common sight in its fenced octagonal ring.

The sport, however, is hugely popular, and interest continues to grow in Canada; all 55,000 tickets for Toronto’s debut UFC event last spring sold out in minutes. And despite the perception that women don’t get the appeal, about 35 percent of UFC’s American audience is female.

But they’re not just watching from the couch. More and more women are pulling on fighting gloves and trying MMA with personal trainers or as part of high-intensity interval circuits at the gym. And thankfully, unlike UFC, this form of MMA is neither violent nor bloody.

Leslie started the sport when she swapped her aerobics class for one-on-one MMA sessions with a personal trainer twice a week. “I needed more of a workout. I’m a very active person, and I travel a lot, so I need a lot of stamina,” she says.

Her typical session starts with a treadmill warm-up, followed by short sequences of resistance training and balance-board or Bosu-ball exercises. Then she goes into a combination of punches and knee strikes, with a few breaths and a quick drink between sets, and stretches at the end.

A year later, Leslie says she’s a lot stronger. “I can lift more, and I feel like I can take on anything!” She’s also more coordinated, and she has better muscle tone and more energy. For Leslie, what keeps her coming back to her MMA-inspired workout every week is the results.

The workout is actually one of the best you can have, say experts. The punching and kicking drills, core-strengthening moves, upper- and lower-body resistance training and short rest periods create a form of high-intensity interval training (known, appropriately enough, as HIT). It’s one of the most effective workouts for improving coordination, strength, cardiovascular health and endurance.

It also blasts calories. “A 150-pound woman doing this type of training will burn about 450 calories per 45-minute workout,” says Gibala. That’s on par with jogging on the treadmill — only a lot less boring and a lot more cool.

The strength and endurance benefits are what made Susan Fine of Toronto another MMA convert. The 58-year-old has been doing a weekly MMA-based workout for the past two years, following a second encounter with breast cancer and a double mastectomy and chemotherapy. Although the treatment drained her mentally and physically, two years after completing her last round of chemotherapy, Susan started working out to rebuild her strength and energy. Then her trainer suggested she try some MMA moves.

“I wasn’t initially that open to the martial arts aspect. I thought, ‘I’m a kindergarten teacher!’ and I was worried it would be too violent,” says Susan. But now she’s hooked. “I feel better. I’m stronger and I’ve lost body fat. And it’s fun! You really don’t notice how hard you’re working because you’re enjoying yourself so much.”

Five tips for getting started

Does an MMA-inspired workout sound like your cup of (extra-strong) tea? Here’s what you need to know

1. Start by taking an introductory class — most gyms offer one for free. Don’t commit unless you loved the workout, trainer and gym.

2. Look for one-on-one or semi-private training. You’ll learn the correct technique and prep, which are essential for avoiding injury.

3. Make sure your trainer shows you how to wrap your hands, so you’re protected when you punch.

4. You can borrow gloves from some gyms for the first session, but you’ll want to invest in your own pair after that.

5. Sign up with a girlfriend, and keep each other on track!

The fast and/or furious workout

Want to ease into a mixed-martial-arts workout? Try 30 Minute Hit, a women-only circuit-training program. It puts you through your paces via two-minute intervals at 13 different stations focusing on boxing, kick-boxing and core-stability training. The classes, which are available across the country, have you do the circuit on your own, while a trainer is nearby to correct form and technique. They start at $49 a month plus registration fee.

“Boxing and kick-boxing are both great ways of building up core strength fast,” says the program’s co-founder, Vancouverite Deanna Loychuk.

But the benefits aren’t just physical. Aggressive workouts can be a great way to shed stress. “Some women have broken down and cried after beating up the gym’s training mannequin, BOB [body opponent bag]. It can be very therapeutic to fight back. There’s this sense of release,” says Loychuk.

MMA-based training pushes a lot of buttons for women — in a good way, says Rachelle Bronfman, co-owner of Powerclub, the personal-training gym in Toronto where both Leslie and Susan train. “We do a lot of strength training — including hitting tires with a heavy sledgehammer. You’re also punching, ducking, moving from side to side, and kicking and knee striking using your full body weight. It’s something different. It’s empowering. You can get your aggression out, and just let loose.”