Is it really possible to lose a pound a day?

The promise of dropping a pound a day sounds tempting, but don't believe the hype. When it comes to weight loss, slow and steady wins the race 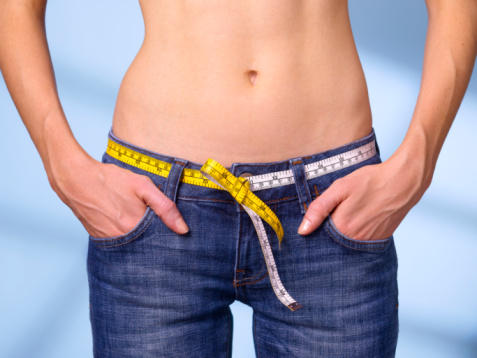 The grocery-store line has more than chocolate bars to tempt you; it also has a lot of sales pitches on magazine covers, ones that sound tempting but ultimately don’t stand up to scrutiny.

Think of all those claims you see on magazines, with outlandish statements of weight loss. Some covers feature super-Photoshopped celebrities, and others simply offer a magical ingredient that’ll fix your entire diet. I once saw a cover line claiming that you could lose nine pounds in seven days by drinking blueberry juice. Forgive me my skepticism.

There are plenty of claims and plans out there that average out to losing about a pound a day for several days, but can it really be done? Believe it or not, it can. There are three separate ways to achieve such rapid fat loss:

Here’s why none of those plans are realistic, or healthy.

1. Dehydration: To start with, dehydration can be very dangerous, and of course you’d gain all the weight back quickly once your water intake went back to normal, healthy levels. Not recommended. Low-carb diets often make people think they’re working well — and rapidly — because carbohydrate depletion leads to massive water loss.

2. Elective amputation: As for the second one, it goes without saying that you wouldn’t voluntarily hack off a limb to lose weight.

3. Morbid obesity: Very obese people can lose weight rapidly, although this doesn’t mean they should. There have been many cases, most notably on the TV show The Biggest Loser, of people losing more than a pound a day because they had such tremendous fat stores to pull from.

Extremely obese people can handle rapid weight-loss because they were taking in such massive amounts of extra calories in the first place that putting them on a regular caloric intake makes it possible to lose a pound a day. This is coupled with the fact that people who weigh 500 pounds or more have a high resting metabolic rate, and carrying around all that extra weight everywhere you go requires massive exertion.

So, can an average person lose weight that quickly — while staying healthy?

In short, no. For people wanting to lose 30 pounds instead of 300, there is no way we can lose weight that quickly. And even though the very obese can lose weight quickly, it doesn’t mean they should do it that way. Crash diets have dramatically negative effects on metabolism, and the hormonal response makes your body feel as though it is starving for calories, to a point that willpower simply cannot combat.

Besides, people who attempt rapid weight loss usually fail. The secret to success is slow and steady. This approach is backed up by the experts — Dr. Robert Kushner, clinical director of the Northwestern Comprehensive Center on Obesity in Chicago, asserts that a safe rate of weight loss is only one to two pounds per week, not seven.

I’ve seen numerous “case studies” — not just in the grocery check-out line and on the net, but on TV and in published books — of people who claim to have lost massive amounts of weight in a short period of time. The thing is, these people weren’t classified as morbidly obese to begin with, so the math just doesn’t add up.

Let’s run some sample numbers so you can see what I mean. We’ll use an example of a woman who weighs 200 pounds and wants to lose a pound a day for 30 days. Oh, and she wants that lost weight to be fat, not water or a leg.

Our 200-pound woman burns approximately 2,000 calories every 24 hours simply by being sedentary — that’s what her body uses to keep itself going. It is generally not recommended that a woman of this size go below an intake of 1,500 calories per day, in order to avoid the aforementioned metabolic slowdown, as well as to avoid a hormonal response that would result in intense, overwhelming feelings of hunger. So, she can create a daily caloric deficit of 500 calories simply by eating less, and that’s without adding additional activity.

But losing a pound of fat requires a caloric deficit of 3,500 calories, so we still need to burn off another 3,000 each day to lose a pound daily. Do you know what it would take for a 200-pound woman to burn off 3,000 calories? Running a marathon.

Say you are this imaginary woman. Can you run a marathon every single day? While restricting calories, no less? Didn’t think so.

All of this doesn’t even take into account that her metabolism is going to start slowing down over time, both due to the weight loss and to an increase in her body’s efficiency.

How much weight can you lose in a day? A week?

So what is possible? For a person who is not seriously obese, losing even two pounds of fat a week is ambitious; one pound a week is more reasonable. Remember, when it comes to getting in shape, there is no quick, and there is no easy.

I’ll close with stating that I actually think that too much focus is put on weight loss anyway. I believe that we need to transcend the scale. There are much better numbers to focus on, such as:

These are the really important numbers of a healthy lifestyle. Fat loss comes just as a bonus by focusing on these numbers instead. If you fully embrace a healthy lifestyle, you can just forget about that scale. It’s not your friend.