You don’t need killer waves to enjoy the thrill of surfing — in fact, you don’t even need water. We tried Surfset, a total-body workout that simulates the sport. 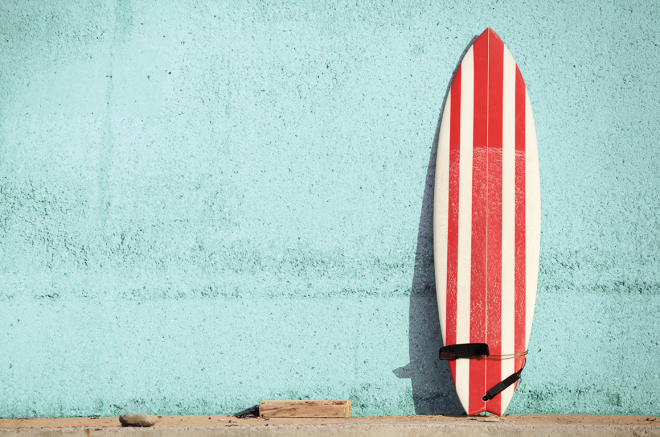 Surfset Toronto’s airy, light-filled indoor surfing studio feels like it could be near the beach in Los Angeles. Surfboards are lined up on the studio floor in front of a wall of mirrors, but, unlike the surfboards you’d find at the seaside, these are made for use on land. The 178-cm-long and 56-cm-wide boards are attached to three inflatable balls that bounce up and down and tip side to side as though you’re on the turbulent waters of the ocean — taking your sit-ups, lunges and side planks to a whole new level.

Founder and surfer Mike Hartwick developed the Surfset board as a way to mimic his prized surf workout when he was away from the West Coast playing professional hockey. His surfboards entered the public domain when they were featured on an episode of ABC’s Shark Tank (the American version of CBC’s Dragons’ Den) a few years ago. Now you’ll find them at fitness studios around the world.

How it went down

There are four different class options: Balance, Burn, Build and Blend. At the recommendation of Alexandra Vinichenko, one of the studio’s owners (and my instructor), I started with Balance, a yoga-inspired workout perfect for beginners — it’s slower-paced and introduces all of the signature moves, like the pop-up and the duck dive.

As soon as I stepped on the board, it began rocking from side to side. Fortunately, we started on our backs, doing a backstroke motion as if paddling out to the waves. That was manageable, but then it was on to core moves, like leg raises and the starfish: Lying on our backs, with legs and arms outstretched, we were instructed to quickly sit up and bring our limbs into a little ball. I struggled to do multiple reps without stopping to re-centre myself on the board every time. Because I was barely able to balance on my back, progressing to the standing moves was a challenge. I finally managed a deep lunge-and- twist; tricky enough on solid ground, let alone on an elevated, unstable surface. Alexandra reminded me that I’d fall only about a foot if my twist went south (plus, the floor is rubber, like a children’s playground).

One of the trickiest moves was jumping from the floor onto the board with two feet. I couldn’t help but lead with one foot, allowing the second to follow, in a kind of hopping motion. After a couple of failed attempts, I finally landed and let out a victorious “woot!”

The next morning, I woke up with aching muscles, especially in my arms and core. Because I’m someone who gets bored at the gym and, try as I might, can’t get into a running routine, I’m always on the lookout for upbeat classes to mix in with my yoga regimen. While I can’t see myself going on a weekly basis, I’ll definitely be back. And who knows, maybe it’ll prepare me to conquer some real waves one day.