How to start running: A step-by-step guide for beginners

Haven't run a kilometre in your life? Not an issue. These tips will turn you into a pro in just 10 weeks. 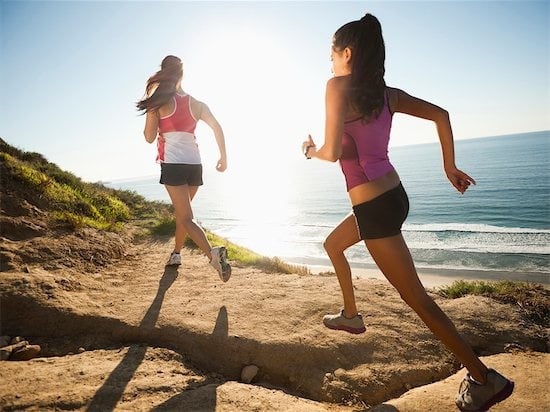 Running is the king of both convenience and calorie-burning, but it takes planning, patience and persistence to become a regular runner. I tried and failed at least four times before I finally got it to stick. I’ve been a regular runner for over six years now, and I think it might hold this time. Here are my tried and tested running tips:

1. Pick a “go” day. Give yourself a couple of weeks to get everything prepared, but have a day that is specifically marked on your calendar as the day you start running. Start getting excited about this new you who is a dedicated runner.

2. Find a friend. Or a family member. This isn’t critical, but having someone who is of similar abilities who is going to join you on becoming a runner can be a powerful motivator. They don’t have to join you for every run.

3. Get tuned up. Researcher James Annesi reported in a 2001 article in the Canadian Journal of Behavioural Science that for aerobic training in general “music significantly improved positive affect. The elevated emotion was considered important for new exercisers during the initial months of attempting to adapt to the demands of a regular program.” Additionally, runners were surveyed and “a preference for music while training was indicated by 87 percent of the sample. Many participants interviewed retrospectively noted a reduction in perceived exertion while running at any pace with music.”

4. Get professional help, Part 1. Don’t go to a regular sporting goods store, but instead choose a store that focuses just on running and get help picking proper shoes, socks, shorts, pants, gloves, hats – all the weather-specific gear you need to start running. It won’t be cheap, but with the exception of the shoes, most of it will last a long time. I’ve put about 5,000km on my Nike running tights and they’re still in good shape.

5. Get professional help, Part 2. Many running stores have clinics you can sign up for that have training groups targeted to beginners. These have the benefit of having lots of educational information about the activity, having like-minded people in the group, being regularly scheduled so that you know when you’re supposed to be running.

6. We are Borg. Resistance is futile. OK, you may need to be a Star Trek geek to get that, but there is a lot of cool running technology out there you may want to consider trying. Gadgets and apps that can track your distance, pace, heart rate and probably some other stuff I don’t know about because the only technology I use is an iPod Shuffle.

7. Go day: Start slow. Exactly how far and how fast you go will depend on things like your age, weight, injuries, and previous training. One word of caution: you may have a good cardiovascular system if you spend lots of time on an elliptical trainer, but you still won’t be used to the impact of running. You will likely have the ability to run much further but shouldn’t. Go too far, and the next day you’ll hurt from the eyebrows down.

So, what I’m going to offer is some basic advice that can apply to a broad group of people, but should be altered based on your specific circumstances. It is designed to minimize pain and chance of injury, and ease you into what is admittedly a very difficult behaviour to adopt. Note that you won’t burn many calories in the beginning.

(For a beginner-to-5km daily training guide, try this program.)

Nine weeks to get up to 5km three times a week isn’t that fast, but it’s getting you there. You may need to go slower, or you might be able to handle faster. Be mindful of your body in terms of pain as well as personal enjoyment. Don’t burn out, but don’t get bored either. You have an important role to play in designing a program based on your unique needs.

And you want to keep pushing your limits. Running 15km a week is only the beginning. Sure, you’ll burn some calories doing this and it will be good for your fitness, but a better weekly distance is more like 30km. That’s getting into workout warrior territory. That’s when you’re really starting to blast through fat stores and get some serious health benefits. Of course, if you keep adapting yourself slowly you can continue beyond that. I rarely go fewer than 40km in a week, and am usually above 50. I know people who run a lot more than this. If you take the time to slowly push both your distance and your speed in increments, you can reach serious mileage without hurting yourself.