How to relieve stress with exercise

Next time you're about to blow, hop on the treadmill instead. Find out how and why working out will calm you down. 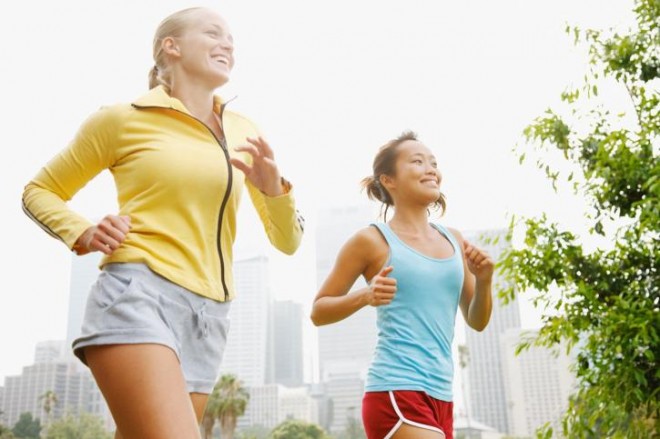 Exercise is a great stress reliever, so it’s a good thing I do a lot of it. When I run or cycle, I’m away from computers and phones and kids and the media telling me the world is going to explode 30 minutes from now. I use this time to let my mind wander. I sometimes generate article ideas or come up with lines that seem witty at the time. Other times I fantasize about getting my book published and ditching the kids with grandma to take my wife someplace tropical.

Conversely, when I lift weights or go downhill skiing, my mind is totally occupied with thoughts of “Don’t drop that weight on your face” or “Don’t ski into that tree.”

What my mind is not thinking of are things that stress me out; it provides a needed break from life’s little problems.

A 2006 study in The Annals of the New York Academy of Sciences explained, more or less, how back when a horde of saber-toothed tigers wandered into the cave, we got stressed out and this elicited the “fight or flight” response. We either grabbed our spears and went all caveman on the invaders, or tried really hard to run faster than someone else so as not to be the one turned into tiger kibble.

These days we still get plenty stressed, and often it’s protracted. Think about it. Tiger comes into cave. Kill tiger or run away from tiger. Within minutes it’s over. But what if the boss sends you an email about your repeated failures, and reminds you of next week’s performance review? It’s not over quickly; it drags out. You sit and stew, and maybe send a snotty email to someone. This isn’t exactly unleashing your inner cavewoman, and that’s bad.

According to the above-mentioned study, the stress causes your adrenal glands to go berserk to mobilize energy resources, and you need to burn that stuff off. If you don’t then it leads to bad things like insulin resistance, storing of visceral (belly) fat, and suppression of gonadal, growth and thyroid hormones. All this stuff serves to put you at much higher risk of heart attack.

Another 2006 study published in Biological Psychology found that exercise significantly reduced stress-induced blood pressure compared with no exercise. Interestingly, they found the more exercise, the better: “greater exercise doses tended to show larger effects.” Although a “significant effect” could be elicited from just 30 minutes at only 50 percent of maximum effort.

Another interesting study came out of Norway in 1996, looking at fibromyalgia patients and comparing aerobic exercise with mental stress management techniques. The researchers found that aerobic exercise “was the overall most effective treatment, despite being subject to the most skeptical patient attitude prior to the study.” So the patients didn’t think exercise would work, but it did anyway. I wonder if the researchers said, “Nyah! Nyah!”

The American Psychological Association has weighed in on this subject as well, asserting that, “physically active people have lower rates of anxiety and depression than sedentary people.” However, this isn’t necessarily coming from the old myth about endorphins: “So far there’s little evidence for the popular theory that exercise causes a rush of endorphins. Rather, one line of research points to the less familiar neuromodulator norepinephrine, which may help the brain deal with stress more efficiently.”

However, it may not be just chemical: “exercise seems to give the body a chance to practice dealing with stress,” The APA says. “It forces the body’s physiological systems – all of which are involved in the stress response – to communicate much more closely than usual.”

So, the next time your blood pressure spikes and you feel like twisting the head off some Voodoo dolls, instead of sitting their and practicing some deep breathing exercises, go for a different type of heavy breathing: push yourself at something physical and you’ll burn off stressful feelings and calories at the same time.

James S. Fell, MBA, is a certified strength and conditioning specialist in Calgary, AB. He writes the column “In-Your-Face Fitness” for the Los Angeles Times and consults with clients on strategic planning for fitness and health. Visit www.bodyforwife.com or email him at james@bodyforwife.com.