How to become a triathlete: Tips for beginners

Bored of your workout? Triathlons may be for you! Find out why so many are embracing the sport and the benefits of cross-training 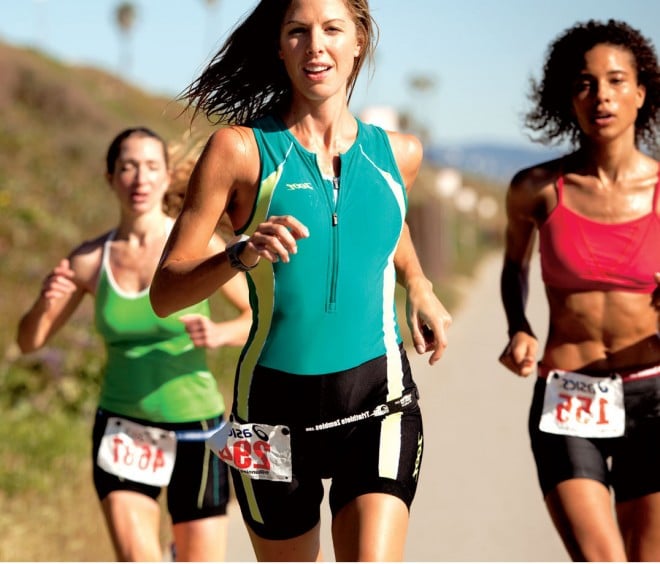 Move over, marathons. There’s a fun new way for more people to get maximum benefits from their fitness program. Enter the triathlon, the latest trend for people who want to challenge themselves to be great all-around athletes. Its swim-bike-run cardio-fest is easier on your body and your boredom threshold than just pounding the pavement for hours, while still offering a killer workout. Better still, the rise of races tailored to beginners — with runs as short as 2.5 km — means anyone can do one.

And it seems like everyone is. Triathlons are more and more popular, with nearly 350,000 North American participants in the last year (and six million worldwide!). And they’re not just hard-bodied 25-year-olds: One of the fastest-growing groups embracing the sport is 30- to 49-year-olds.

Kathy Wise, a 42-year-old in Kelowna, B.C., completed her first triathlon, the sprint-distance Pushor Mitchell Kelowna Apple Triathlon, two years ago. “During a casual conversation over wine, a friend mentioned he’d joined a local clinic introducing beginners to triathlon. I’d always wanted to give it a try, so right then and there, I signed up, too,” says Kathy.

Training with the group gave Kathy the motivation and discipline she needed to prep for her race. “I finished with a big smile and a huge sense of accomplishment,” she says — and she fell in love with the feeling. Last year, Kathy increased her training and completed an Olympic-distance triathlon, a 1.5-km swim, a 40-km bike and a 10-km run around Kelowna’s scenic lake.

Although Kathy started with some running experience, she says many of her clinic mates did not. “Most of the participants were average people like me, and some didn’t have a lot of experience. It helps to have some basic fitness, but you don’t need to be an extreme athlete to try a [short-distance] triathlon,” she says. On race day, participants compete against other women in their own age group. Many races also include an Athena group (for women 150 pounds and up), para-triathlons for athletes with physical or visual impairments and a women’s 70+ category.

Triathlons’ cross-training nature means it’s less likely you’ll get injured during training, especially compared with running-only regimens. “Muscular stress is more common in running than in any other [triathlon] event, due to the high repetitive-force impact,” says Stuart M. Phillips, a professor of kinesiology at McMaster University in Hamilton, Ont., so mixing up your training is key.

Another plus: Switching between swim, cycle and running sessions can alleviate boredom and keep you motivated. Can’t hack running on a 5C morning? Hit the pool instead. Don’t feel like getting wet? Hop on your bike. You’ll build endurance, since all three events are “equally taxing when performed to the best of your ability or as hard as you can manage,” says Phillips. And the variety guarantees you’re building your body up evenly. “Everyone tends to have a weaker sport — for me it’s cycling — so I always have to work harder on that,” says elite-level triathlete and triathlon coach Judy Andrew Piel of Ottawa.

Triathlons are also a great next step for long-distance runners looking for a new challenge or to rest their legs after injury. Patti Warr, 50, started distance running in her early 20s. An injury caused her to take to cycling. Post-recovery, she combined both her passions in a duathlon (a bike-and-run race, without swimming). “I did a few half-Ironman duathlons and realized I was getting the endurance of the marathon that I loved, but it didn’t feel as hard on my body,” says the Baden, Ont., resident, who moved on to triathlon nine years ago and has completed full Ironman triathlons in Austria and Hawaii.

Near the end of your training, you should prepare for a triathlon’s unique transitions with multi-sport days. “When you start out, the toughest part of the race is getting your legs to cooperate after you get off the bike and try to run. A little training makes a big difference with that,” says Kathy, who has competed in numerous sprint, Olympic and Ironman triathlons, regularly placing in the top ranks of her women’s 45-to-49 age group.

Get started and keep yourself on track by signing up for a training clinic or triath­lon club (find one near you at Trisport Canada). You’ll benefit from the guidance of professionals and more experienced peers.

Kathy raves about the clinic she joined to prep for her first triathlon. “The group dynamics were very motivating and there are many details to learn that you may not get on your own. I still train with some of them now, two years later, so I’ve made some great new friends,” she says.

If you’re crunched for time or money, consider taking a mix­-and­-match approach, suggests Patti. The triathlete attends early­ morning swim training with a masters swim group (offered at many YMCAs), enjoys long bike rides with friends and runs solo. “Having a coach at the start is a really great idea and can save you from making a lot of mistakes. [But] I was trying to do everything as economically as possible so I just read everything I could find, and it worked for me,” says Patti.

No matter how you do it, training for a triathlon will certainly push you to get in shape. And after all that hard work, crossing the finish line will be even sweeter.

Choose your own adventure
Whether you’re just starting out or a marathon master, there’s a race for you

Newbies: The “try-a-tri” is the way to ease in. This unintimidating intro to the sport requires a 375-m swim, a 10-km bike and a 2.5-km run. Hang out after you’re done and watch the longer races to pick up tips on how to manage transitions from swimming to biking, or biking to running.

Fit and fab: If you already hit the gym, you’re ready to do a sprint triathlon. With a 500-m swim, a 20-km bike and a 5-km run, it’s the perfect length for those who are already in shape — it will push you, but you won’t need to train too hard. No surprise then that it’s also growing fast in popularity!

Your six-week training plan
Be ready for a sprint triathlon in no time, with this program designed by coaches Judy Andrew Piel and JR Tremblay, from K2J Fitness. 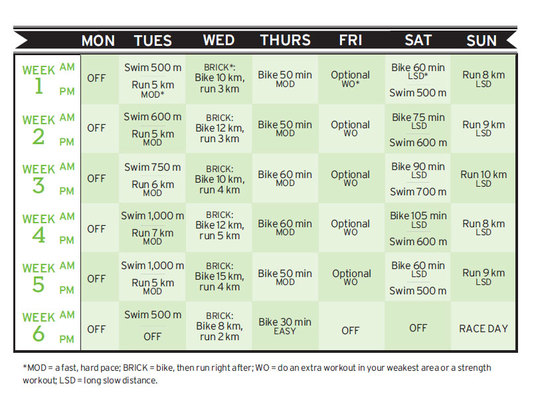