How hard should you train?

Wondering if you should stay in the fat-burning zone during cardio exercise? Ignore those charts and focus on training your hardest instead. 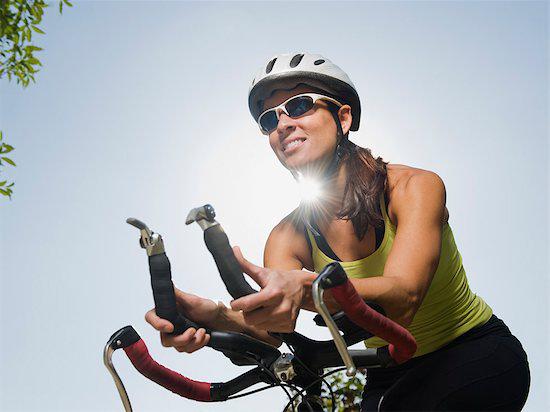 You know those fancy charts they have on treadmills, elliptical trainers and stationary bikes at the gym that talk about “fat-burning zones” and “cardio-training zones?” Well, if fat loss is your goal, you can pretty much ignore those charts. Here’s what you should do instead: Go as hard as you can, for as long as you can. Pretty simple.

I’m guessing you might want some proof as to why this is the case, and I am happy to oblige. Those charts claim that you use mostly fat as a fuel source at moderate exercise intensities, and while this is true, it is also completely irrelevant. Yes, you do “oxidize” more body fat at moderate intensity levels and burn more carbohydrates as a source of fuel at higher intensities, but if you think of your energy stores as one big soup it all comes out in the wash.

If you’ve ever seen a heart rate chart on a treadmill then you’ve read “fat-burning zone” at a moderate heart rate (about 60 percent of maximum) and “cardiovascular training zone” at a higher rate (75 percent of maximum or greater). Those charts aren’t exactly wrong, but they’re not telling the complete story either. In a 2005 article in the European Journal of Sport Science, researchers measured fat-oxidation (burning) rates at intensity levels ranging from about 25 percent to 85 percent of maximum heart rate. They determined that the highest level of fat burning was around 65 percent of maximum heart rate. Fat burning became “negligible” at intensities above 85 percent because at the highest intensities, we burn mostly carbohydrates for fuel. These facts lead many to believe that exercising at a moderate intensity causes enhanced fat burning. While technically correct, it ignores the bigger picture of how fat loss works.

Ironically, fat loss is not about using fat for fuel during activity; it is about creating a consistent negative energy balance. This means it’s about calories in vs. calories out, which needs to be viewed from the perspective of what is called the 24-hour energy balance. If your energy balance is negative (more calories burned than consumed) weight is lost; if your energy balance is positive weight is gained. Yes, you may use more body fat for fuel while exercising at a moderate intensity, but in the grand scheme of the 24-hour energy balance equation this means nothing. If you exercise to create an overall negative energy balance, you are going to burn those fat stores at some point in the day, whether you happen to be eating, sleeping, working or doing other stuff. The fact that the ratio of fat burned during moderate exercise was higher for fat than carbohydrates doesn’t make a difference.

Also, higher intensity training is better for exercise time management. If you have 40 minutes in your schedule and want to maximize calories burned, then pick the fastest pace you can handle for that duration of time. If you’ve ample time, this equation changes to a balancing act of finding a challenging yet sustainable level of intensity. The above-mentioned research found the most total calories were burned at 75 percent of max heart rate because this is a high level of intensity that people can sustain for a long time. If you push the intensity much higher than this, it’s too much and your workout gets cut short because you run out of gas and you burn fewer total calories. And if fat loss is your goal, then it is total calories that you are worried about.

Another interesting fact is that a 1998 article in the Journal of the American College of Clinical Nutrition found that sustained high-intensity exercise was far better at decreasing body-fat content than exercising at lower intensities. It’s important to note that metabolism increases on a sliding scale – the higher the intensity, so you burn more calories running five kilometres than walking or slow jogging those same five kilometres (and in less time). There are other great reasons to run at a higher intensity: it improves your overall cardiovascular fitness level, making you more capable in other sports, and it is better at boosting HDL (good) cholesterol.

Here’s another thing that I don’t have any scientific references for, but my gut instinct tells me is true: The harder you work out, the mentally tougher you become, and this mental toughness is a critical in resisting the ample supplies of high-calorie junk food that permeates modern society. If you get used to pushing yourself when you exercise, you train your brain to be more health conscious and can make wiser, calorie-restricted food choices that are an even more important aspect of fat loss.

Finally, the best intensity to work out at is the one you like the most – the pace that keeps you going back again and again. Just don’t be afraid to incrementally push your limits if you want to burn more calories and therefore lose more fat.