Heather Moyse chats to us about training, recovering from injuries and what being 35 means in the world of sport. 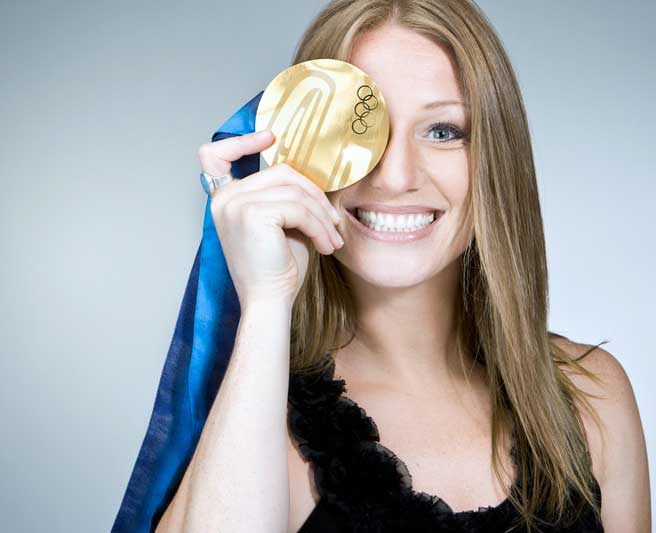 Heather Moyse is a triple-threat. She’s represented Canada at elite levels for three different sports: bobsleigh, rugby and track cycling. But she doesn’t just represent Canada, she plays to win, and she does. In 2010, she earned an Olympic gold medal on home soil in the two-woman bobsleigh event. That same year she competed in the Women’s Rugby World Cup in London, England, and tied for leading try-scorer of the tournament.

Fast-forward to June 2011, the Prince Edward Island native tried track cycling for the first time as a way to keep active while recovering from an ankle injury. Four months later Heather earned a spot to represent Canada at the 2012 Pan-American Cycling Championships in Argentina. She placed fourth in the 50-metre time trial sprint and fifth in the 500-metre head-to-head sprint event. Not bad considering it was her first real track-cycling competition, let alone her first international one.

After undergoing hip surgery in November 2012, she went on to represent Canada at the 2013 Rugby World Cup Sevens in Moscow. But Heather’s not stopping there. Given the nickname “Batman” by one of her teammates, the 35-year-old is suiting up again (sans cape) for the 2014 Winter Olympics in Sochi, Russia – her third time representing Canada at the Olympics. She’ll be breakman to Kaillie Humphries, her partner at the Vancouver Olympics, in order to defend their gold medal win.   Here’s what the multi-sport competitive athlete had to say about winterizing her workouts, how she mentally prepares for a sport and what she eats to stay competition-ready.

Q: What’s the most fun way to winterize your workout?
A: I don’t think I’ve had a winter where I’m not training for anything, but I would probably find indoor activities. I would join a co-ed basketball team or some kind of indoor ultimate Frisbee team. And I think in the winter, part of the key is doing things in groups because it keeps you motivated – it keeps you accountable.

I’m not so much of a jogger. If I’m going on walks with my mom, I’ll often be playing music on my phone with one earbud in, and then listening to the conversation with my other ear. For me, music takes away anything negative. It just always makes things more enjoyable for me.

Q: How do you prepare mentally for a sport, and does it differ among activities?
A: With rugby…a lot of it is prep that you do as a team. You’re looking at game footage and video footage of the team you’re about to play.

When you’re on your own, if you’re working on personal skills, then sometimes you just have to visualize those skills before you step out on the field.

When you’re on your own, if you’re working on personal skills, then sometimes you just have to visualize those skills. And it’s just literally closing my eyes – usually I like to physically stand so that I can contract the muscles that I would need to contract in order to push the sled – and just simulate in my mind that ideal angle when I fall into the sled and when I can extend out. Going through it in my mind helps put my mind on my body and in the right spot.

I use positive visualization more so for cycling and for bobsledding because it’s very specific. Both of those sports are coming down to hundredths of a second, so you need to perfect those moments in your brain to get every single hundredth of a second that you can.

Q: What does your pre-race meal look like?
A:  It’s different depending on the time of our race. I usually eat a meal about three hours before a race. If it’s in the morning, I have a breakfast that usually has a lot of protein and a lot of carbs. It would maybe be eggs and some kind of potatoes because those kinds of carbs will make me feel full for longer.

If it’s later in the day, like an evening race, I will probably get my protein from chicken or salmon, and I will have some kind of carb.

Q: How are you refueling during races and games?
A: I love BioSteel stuff, and that’s my sports drink of choice when I’m training. In Rugby Sevens it’s more of a tournament format, so you have to refuel because that’s lasting an entire day. For me, it would be about granola bars.

Sometimes for bobsledding, I’ll have a little pack of mini marshmallows in my bag, or any kind of little candies, like Sour Patch Kids. That’s not necessarily on race days, but those are for sliding days when we’re there for hours.

Q: How many calories are you consuming a day?
A: I’m not a calorie counter. I actually don’t really approve of people counting calories, partly because people don’t realize calories are good for you. I feel like the problem is just where they’re getting their calories from, but some people forget that part and just limit their calories.

My meals are extremely healthy. My biggest thing is making sure that you get enough proteins and carbs in your meals. For me, it’s just a matter of getting as many calories as I can in order to withstand the training that we deal with on a daily basis.

Q: Rugby Sevens is included in the 2016 Summer Olympics. Are you thinking of representing Canada then?
A: In 2012, I set out the goal for both rugby and bobsledding for 2013. I’m kind of just trying to take things one year at a time, one season at a time. When people start talking about Sochi, I literally will break it down to one race at a time. I think if you get too far ahead of yourself, you don’t accomplish what you want to in the moment.

I’m 35 years old, so for me, I’m really excited about looking into things that are going to happen after sport is over.

Q: Would you consider competing at the 2016 Olympics for cycling?
A: The coaches, staff and teammates had said that if I kept cycling I would for sure be going to the 2016 Olympics. But at that point, it wasn’t a four-year commitment that I was prepared to make because I also knew that I potentially wanted to return to rugby, or to bobsledding for the 2014 Olympics.

This spring and summer after the 2014 Winter Games, I’m planning to take a solid break, and then after that, I really don’t know. I think I would be more inclined to return for an event like the 500-metre time trial, but that was taken out of the last Olympics in London. If they decide to put it back in..I would be much more inclined to go back to cycling.

Watch her compete February 18 here. For more on our Olympic hopefuls click here.