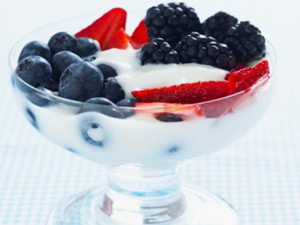 Indulging – even for a special occasion like Valentine’s Day – doesn’t have to be a step in the wrong direction. Our four dietitian-approved, low-calorie gourmet goodies will let you treat yourself without sending your health off track.

Strawberry pie
Who would have thought there was such a thing as healthy pie? This version, from Laurie Barker Jackman, a dietitian in Halifax, has less than 100 calories and 5 grams of fat per slice, Jackman’s recommended guidelines for treats. To make it, mix 1 package (85 grams) of strawberry Jell-O and 1/4 cup (50 mL) of boiling water until dissolved. Whisk in 2 1/2 cups (625 mL) of lemon yogourt, then fold in 1 litre of fat-free whipped topping. Pour into a store-bought crust and chill for 2 hours.

Yogourt-dipped fruit
Instead of chocolate-dipped strawberries, Dufour suggests trying a variety of fruit – like passion fruit, melon, kiwi, starfruit and papaya – with her healthy yogourt-based dip. To make it, start with 2 cups (500 mL) of your favorite low-fat vanilla yogourt. Add a squeeze of lemon juice, 2 tbsp (30 mL) of icing sugar, 1 tsp (5 mL) of vanilla and 1 tsp (5 mL) of cinnamon, then blend until combined.

Low-fat pudding parfaits
This dessert, served layered in champagne glasses, is a show-stopper. “It’ll look like you’ve spent hours in the kitchen – and it’ll really impress your date,” says Dufour. Whip 1 cup (250 mL) of low-fat whipped topping, like Cool Whip, 1 tsp (5 mL) of skim milk and 2 tbsp (30 mL) of peanut butter together until smooth. Divide one non-fat chocolate or butterscotch pudding cup into the bottoms of the flutes, add half of the peanut-butter mixture to each, then top each with another half cup of pudding. Add a dollop of whipped topping – and, of course, a cherry on top.