You probably think these items are good for you, but they’re not. Get back on track by tossing them today! 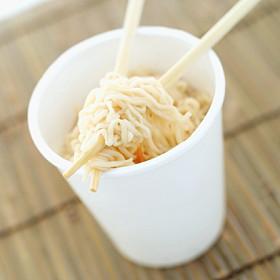 What hidden calories lurk in the staples you reach for every day? You might be surprised: these common grocery items seem like they’re good for you, but they’re actually full of hidden fats, sugars and sodium. Edmonton dietitian Brenda Arychuk gave us the lowdown on the five products to trash from your cupboard.

Juice
100 percent fruit juice without added sugar is healthy, right? “Pure apple juice has the same glycemic load as pop – up to seven teaspoons of sugar per cup,” says Arychuk. Plus, it’s high in calories. To easily cut out a few hundred, replace juice with water. That’s probably what your body is craving, anyway.

Tomato sauce
It might seem like the start to a nutritious dinner, but half a cup of prepared tomato sauce could contain a whopping 500 to 800 g of sodium. “With prepared foods, something that doesn’t seem super salty can be loaded with sodium,” adds Arychuk. “You’re better off buying plain tomatoes and making your own sauce.” Intimidated by the time commitment of homemade? Don’t be. Our 20-minute, three-ingredient tomato sauce couldn’t be easier.

Cereal and granola bars
You’re already avoiding sugary cereals – or are you? “Granola is a red flag for added fat and sugar,” cautions Arychuk. Sugar could be half the total carbohydrates, and the same goes for granola bars. “A lot of these are glorified cookies,” she adds. Look for those high in fibre and protein, and avoid coatings – they’re just fat and sugar.

Instant noodles
Those quick prepared soup cups chosen that look like a sensible work lunch are actually the opposite. “You’re looking at 500 g of sodium in one small serving – and the wrong kind of fat,” says Arychuk. Instant ramen noodles also tend to contain palm oil, high in saturated fat. “You’re better off just getting rid of them.”

Salad dressing and marinades
We tend not to think of calories when we reach for condiments or marinades, even though they’re a triple threat: high in sugar, fat and salt. Make your own dressing with 1 tsp balsamic vinegar and 2 tsp olive oil, and make DIY marinades as well. Or, if you’re going to store-bought, be picky: Arychuk suggests reading the label closely, since amounts vary widely between brands.