I Tried The Hottest Fitness Trend. It Was Brutal And Agonizing—And I Can’t Wait To Do It Again 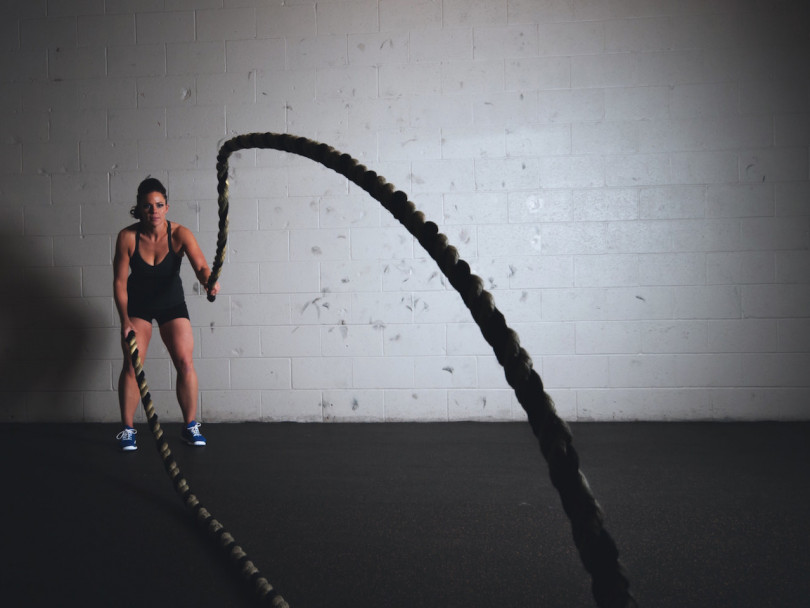 How am I starting my Monday? Meh, pretty normally: just crouching atop a neon blue exercise ball and furiously wobbling while I jerk one end of an enormous, heavily weighted rope that’s snaked across the floor, until the far end springs into the air from the powerful ripples I’ve created while an over-caffeinated Australian man shouts at me and I long for the sweet release of death.

This is F45. It’s a class that promises to improve your fitness. Fitness for what, exactly? If I had to guess, I’d say enrolment in the lunar super-military that humankind must assemble when the apocalypse comes and every moment of existence is a full-body fight.

F45 is a high-interval intensity training (HIIT) workout from Australia that’s exploded, much like my lungs mid-class, into a worldwide thing. Dozens of F45 gyms have arrived across the country (there’s 17 in Toronto alone), and fierce communities have formed around the classes. The “F” stands for “functional” (as in movement) and the workout is 45 minutes. At my local F45 gym, the classes have names like “Firestorm” and “Panthers” and “Romans.”

After an unexpected layoff at work, I was in search of a workout routine that would give some shape to my amorphous mornings. My main criteria was that it was ridiculously hard: I wanted to feel physically stronger in the hopes of feeling mentally stronger. When an old high school friend professed her love of F45 in a long, sprawling ode on Facebook, I scoffed. Moments later, I signed up for a free trial week.

My first class is called “Foxtrot.” When I open the door to the unassuming basement gym and stand there watching the final minutes of the previous class, my brain struggles to process what I’m seeing. To the untrained eye (and body), it’s pure chaos. There are about 30 people. Some are doing burpees, others are swinging kettlebells, some are on stationary bikes, others are sprinting back and forth carrying sandbags. The room looks like someone put every known approach to human fitness in a giant blender, left it on high speed, and walked away.

I observe how HIIT works: the participants give their maximum exertion for one minute, then rest for 15 seconds, heavy panting and high fives scattered over the ’90s techno music. The room is warm, damp and pulsing. During those 15 seconds, everyone rotates to the next station and begins a new exercise. Again and again, for 45 minutes. Flat-screen TVs on the wall show a silent avatar named Chad performing each exercise correctly. Underneath Chad, a digital clock counts down each minute of work.

There are 12 stations set up around the room. The cheerful Australian instructor explains that we’ll move through the entire circuit of 12 exercises THRICE. An involuntary nervous laugh of surprise escapes my mouth. Two of my intimidatingly ripped and tanned classmates smile at me, eyes crinkled with sympathy.

Science will never be able to explain what happens to time during an F45 class. I begin with a minute of jump squats while holding a weighted ball over my head. I am convinced 13 hours have gone by and would stake my life savings on this fact. But when I consult the stopwatch on the wall, it’s been seven seconds.

All my blood is replaced with searing hot panic. My quads are burning, my arms are shaking, and my heart seems to think I recently slammed a family-pack of Redbulls. And I’m not even a quarter of the way through the first of 36 stations.

Now I have to jump up onto a giant wooden box and then jump off backward. Up and back down. For a full minute. Have you ever felt your body actively laughing at you? As I stand firmly on the earth and simply look at the top of the box, my cells rearrange themselves to spell out “HA HA YEAH RIGHT” in ornate cursive. I jump, land atop the box a quivering splattered mess, and figure I’m cool to probably just spend the rest of my life up here, raise a family, live off the land. Meanwhile, the guy beside me is casually averaging approximately 50,000 jumps per nanosecond.

I hold a plank. I climb up a rope that hangs from the ceiling. I push a massive, absurdly heavy steel plate 10 metres to and fro, my torso parallel to the ground with effort. For survival reasons, I make a sweaty and silent vow to stop looking at the clock. Gradually, I start to gauge how much time has passed from the collective energy and rhythm of the group. I start to feel primal, feral, like I’ve morphed into some kind of sinewy half-human creature. After a while, I’m no longer sprinting to improve my cardio; I’m narrowly escaping a predator using quivering muscles, instinct and pure will.

I gulp cold water with fresh desperation at each rest period and my t-shirt is soaked. But in those 15 seconds where everyone transitions to the next station, we give each other fist bumps and we laugh and make faces of exaggerated agony and gesture at our shaking body parts. The Australian man leaps up easily onto a wooden box like some kind of cartoon ibex and yells that we’re amazing. I’m dizzy and my legs feel like columns of undercooked custard. And then a weird thing happens: I really want to keep going.

At the final station, I’m doing split-squats (don’t even ask) with a weighted sledgehammer in my hands. Every moment is the worst thing that’s ever happened to mankind. But then the buzzer slices through Mariah Carey’s stratospheric chorus and the entire room collapses onto the floor in glorious unison, breathing hard like a herd of champions. And that’s the other way time gets weird in an F45 class: I’m genuinely shocked it’s over already. The class flew by, even if each individual second took a year.

I feel simultaneously fragile and strong, exhausted and energized, a formidable warrior who can barely climb the five stairs up to the street. And when I step outside and the spring air soothes my sweaty face, I actually and truly can’t wait to go back to that thing I never want to do again.