Exercise is about a lot more than burning calories

Our fitness expert looks back on his biggest epiphanies of 2011. Get his best tips to get you in shape in 2012 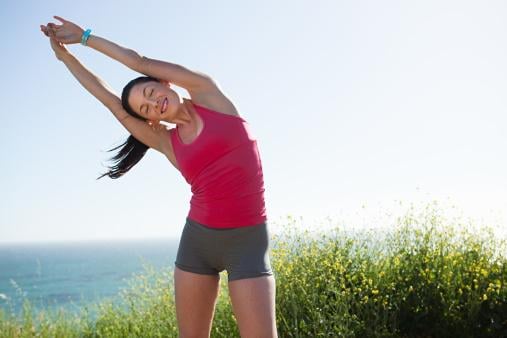 After 18 years of being a fitness guy, it was in 2011 that I got my biggest eye-opener about exercise ever: I finally realized that burning calories is the least important thing exercise does.

Thinking about exercise beyond just calories

For me the caloric burn is significant, but I’m not like most people. I burn roughly 7,000 calories a week via exercise — the equivalent of two pounds of fat — but that takes a lot of intense exercise to accomplish, far more than what most people are willing to do.

I used to make a bigger deal about caloric burn, and I still think it is worth knowing what you’re burning. I’ve written articles about how interval training is not a better calorie burner than regularly steady-state training, and that running a mile burns more calories than walking it does. But in the grand scheme of the benefits of exercise, calories barely rate mentioning.

Learning to love exercise is critical for adherence, and I’ll admit that part of what I love about a 90K bike ride is knowing just how much beer I burned off. However, in terms of overall exercise outcomes, there is so much more going on beyond the first law of thermodynamics.

Exercise as a fountain of youth

This next discovery is one I already knew, but the re-jigging of my thought processes brought it to the fore in 2011. This is the year I realized that the most important reason to exercise is for the training effect. As I get older and start thinking more about health and less about physique (although I still prize the latter), I realize that exercise is the only fountain of youth we have. There aren’t any pills yet that can hold a candle to it.

Body fat is far less important than physical fitness when it comes to longevity, and being consistently active is good for just about every body process you have — not just heart and lungs, but also your brain, immune system, stress levels, and hormones. Also consider the fact that it makes you stronger, faster, more agile, and flexible, and just generally improves mood and mental functions.

And it makes you look good, beyond simple fat loss. Having some muscles to show off is cool, regardless of your age or gender.

Learning that every bit matters

But here is the big wake up call I had this year, and I’ll tell you how it came about. The first is that I started getting more engaged with obesity researchers — people with MDs and PhDs — to get their take on fitness issues. One of them, Dr. Yoni Freedhoff, gave me the wake-up call that the vast majority of the population would never workout as much as I do. Deep down I knew this, but it wasn’t always forefront in my mind.

This doesn’t mean I don’t think you shouldn’t try to adopt a fitness regimen like mine — but I realized I can reach more people and offer better advice if I understand that most of you never will, and that is okay.

Dr. Arya Sharma taught me about how exercise can improve “ingestive behaviour,” meaning it positively changes eating behaviours to achieve weight loss — I knew this one too, but never pushed it that much. I tell people, “Starting a good habit (exercise) is easier than quitting a bad one (overeating on junk food), so just focus on exercise for starters and let that train you towards better eating. When you start exercising like a healthy person, you’ll want to start eating like one.”

Seeing Dr. Sharma write words in support of this idea got me pushing the concept harder.

Exercise as the ultimate reward

And most important is that I made a fortuitous connection with Dr. Margaret Yúfera-Leitch. Margaret emailed me from Spain after reading this open letter I wrote to Oprah Winfrey in The Los Angeles Times, and we started up an electronic friendship.

Margaret has a PhD in psychology with a focus on eating behaviours, and lucky for me she’s originally from Calgary (my home town) so we’ve been able to meet a few times this year. Margaret is the one who really taught me about the power of exercise to improve eating behaviours. She’s scientifically deconstructed the mechanisms about how it works at the neuro-chemical level. It’s fascinating stuff, and she’s one of the leading experts on this subject in the world.

I was thrilled when she agreed to co-author a book with me about emotional eating. If you’re curious, have a look at the introduction.

The really fascinating thing Margaret led me towards is about reward-focused behaviour, and how eating and exercise are both closely linked to this. When you exercise — especially if this is at a more intense level and for a reasonably lengthy duration — it works on the same neuro-chemical reward pathways in your brain as do those feel-good rushes you get from eating junk food, doing drugs, drinking alcohol, or even gambling. Exercise is a healthy alternative to get that same awesome feeling. What’s more, when you exercise a lot, it actually blunts the rewarding effects of junk food. Those Oreos just don’t taste as good.

There is a lot more going on, but what it’s important to remember is that exercise does so much more than burn calories. And you must keep top of mind that just because you exercised, this does not entitle you to reward yourself with junk food. Instead, it means that you’ve obtained the power to resist junk food. You can now start craving the healthy choices instead.

I want a salad.

James S. Fell, MBA, is a certified strength and conditioning specialist in Calgary, AB. He writes the column “In-Your-Face Fitness” for The Los Angeles Times and consults with clients on strategic planning for fitness and health. Get a free metabolism report at Body For Wife. Email James at james@bodyforwife.com.