Don't feel like exercising? One trick to get you out the door

Need a kick in the right direction to get your workout done? Read this. Trust us, you'll feel better for it! 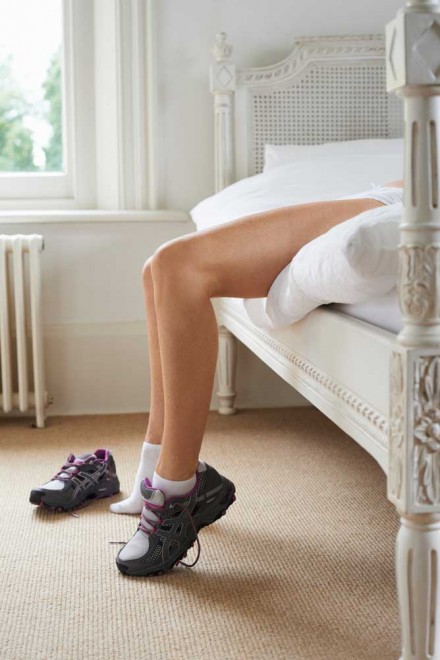 Getting dressed is half the battle when it comes to gearing up for a workout (Photo by Getty Images).

A number of times I’ve discussed how important it is to develop passion for the exercise you engage in. It’s passion — enjoying the act — that gets you to be and stay active for hours each week, week after week, year after year.

I’m writing this article now because it happened to me last night. I like running for a lot of reasons. I like being outside. I like being slim and healthy. I like the feeling of exertion and accomplishment I get from it. I like the sweat.

Last night was karate night, meaning I had to take my kids to their class and had 80 minutes to kill. I could have done what most other parents do: run errands, read a book, do email on my phone, hit the McDonald’s drive-thru. Believe me, I wanted to do one of those things. I’m in the middle of a really good book and for a moment I thought about ditching the run and reading instead. I came close.

I was making excuses. I exercise a lot already. Missing one run shouldn’t make much difference. I can skip it this once.

Then the rational side of my brain kicked in. When you let the excuses take over once, they can do it again and again. Then one day instead of regular runs it’s regular visits to Dairy Queen and eventually regular trips to the cardiologist. I don’t want to be that guy.

So rather than make some snap-decision and say, “Screw it” and not run, I actually took a moment to think about things objectively. I analyzed all my feelings about it and came up with the following facts:

Still, I really didn’t want to. Despite all the facts I’d come up with, my emotions were ruling and I was about to talk myself out of doing it. Then one quick idea popped into my head and I acted on it — just get dressed.

What I mean is, if I took one minute to put my running gear on, then I’d pretty much have to run…wouldn’t I? Of course I would, because those $15 running socks aren’t all that comfortable for anything other than running.

And guess what. It worked. I did it. And you know what? It was a good run, and I felt great about myself for persevering afterwards. It felt good to suck it up. This was one small victory of me feeling like a workout warrior, and it will serve as a reminder the next time I really don’t want to — positive reinforcement at its most basic.

The lesson here is that, even if you do develop a passion for exercise, it doesn’t always work and sometimes you have to suck it up and do something you don’t feel like doing. The reason why is that not following through can become a habit. And then your bad habit of ditching exercise eventually ends up replacing that hard-developed good habit of being a regular exerciser.

I’m not saying you should never skip a workout. I’ve skipped plenty in my day. But when you’re thinking about bailing on exercise, take a few minutes and really think about it. Don’t just automatically crap out, but instead give yourself every chance to follow through. You can even try to trick yourself into doing it like I did with getting changed.

If all that fails and you still decide not to workout, then don’t beat yourself up about it. Just try to do better next time.

Next time, suck it up. Read on for six great ways to beat running boredom.