A brief look at Eugenie Bouchard's road to Wimbledon

Today the tennis star becomes the first Canadian singles player to ever compete in a Wimbledon final. We give you a refresher on her road to greatness here. 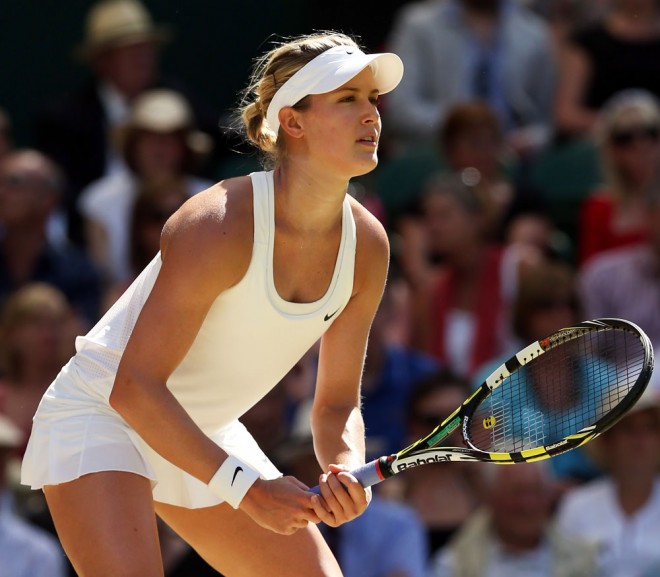 Eugenie Bouchard of Canada during her ladies’ singles semi-final match against Simona Halep of Romania on day 10 of Wimbledon. (Photo, Matthew Stockman/Getty Images)

1. February 25, 1994
Born in Westmount, Quebec to a banker father, and a stay at home mom. Together they have four children, Eugenie, her twin, Beatrice, Charlotte and the youngest, William.

3. 2003
At nine years old, Bouchard qualifies for a tournament in France.

4. 2007
To improve her game, she moves to Florida with her grandmother (and remains there until 2010). At 12 years old, finding it hard to live apart, her family joins her there.

6. July 7, 2009
Eugenie gains her first bit of international recognition when she wins the Junior Wimbledon tournament in England.

8. November 17, 2013
While being interviewed on the television show Tout le monde en parle, she dodges a question about rumours of being in a relationship with Canadiens player Alex Galchenyuk.

9. January 23, 2013
“Justin Bieber?” The answer to a journalist who asked her (after winning the quarterfinals at the Australian Open) with whom she would like to go on a date with. Word quickly spreads around the world.

10. April 20, 2013
Eugenie wins the Fed Cup and allows Canada to rank among the top eight countries in the world.

12. June 9, 2014
She bows out to Russian Maria Sharapova, her childhood idol, in the semifinals of The French Open. And climbs to 12th place.

13. July 5, 2014
Watch today (9 a.m. EST) as she takes on Petra Kvitova in her first grand slam final. Today she also becomes the first Canadian singles player to fight for the Wimbledon title.

14. August 1-10, 2014
Unless something unforseen happens, Eugenie will be at the Rogers Cup, at the Uniprix Stadium in the Jarry Park, Montreal.