Do walking and running burn the same amount of calories?

Find out how upping your intensity, whether walking or running, can increase your calories burned. 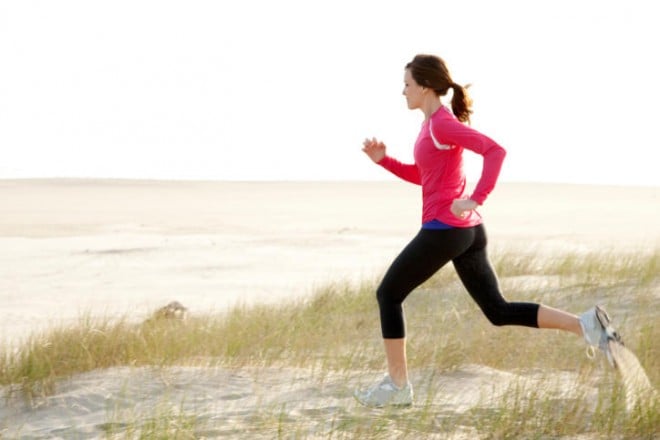 I won’t keep you in suspense. The answer is “No.”

This is a common myth, even in the medical community. My wife (a family physician) told me she knows of many doctors who will say that walking a mile will burn just as many calories as running it will, but the math simply doesn’t add up.

Excuse the use of imperial measurements, but if I convert to metric my nice round numbers will get much less round and be harder to follow.

First off, this is not meant to deter anyone from walking. It is the single most popular form of exercise, and more people have used it as a tool to get and stay fit than any other. It’s not too challenging for beginning exercisers and can be enjoyable. However, I want you to check out the numbers below and hopefully get motivated to push it just a little if you’re a walker. I believe in the power of incremental improvement. Walking can become slow jogging. When that becomes comfortable, it can become faster jogging, and jogging can eventually become running and even faster running.

Why MET is important
The way caloric burn via activity is measured is by the MET, which stands for metabolic equivalent. One MET is how many calories you burn while at rest. In the interest of using round numbers, let’s use an example of a pretty big person whose resting MET is 100 calories per hour.

Compare this to running at 8mph (pretty darn fast — almost 13kmh). The METs climb to 13.5. So if our guinea pig runs at this speed, she burns 1,350 calories in an hour, 1,250 of which are “extra” beyond couch sitting. She went twice as far, but burned much more than double the calories.

So, if she walks at 4mph for two hours, she travels eight miles and burns a total of 800 extra calories. If she runs at 8mph for one hour, she burns 1,250 extra calories. That’s 450 additional calories burned in half the time for the same distance traveled! Not only that, but since we’re talking about “extra” calories here, if she ran for an hour at 8mph she still has another hour to kill (because she didn’t spend two hours walking). So, that’s another 100 calories burned via couch sitting — if that’s what she wants to do after her run, of course.

Determining your MET
You can go here to see a chart that lists METs of various activities, and to figure out what your one MET is you need to know your resting metabolic rate (RMR). For women, the calculation for 24-hour RMR is:

Or, you could just use this online calculator. I’ve tested it out and it’s pretty accurate. The number you get needs to be divided by 24 to determine how many calories you burn in one hour while at rest, which you can do with an old-fashioned calculator, and then you know the number that is your one MET for an hour. If you want to know what it is for 30 minutes of activity, then you chop that number in half, and so on.

Running vs walking
Back to running vs. walking. I know it’s hard to fathom because it seems like the same amount of “work” is being done, but when you walk your arms and the rest of your body don’t move as much, and you always have one foot on the ground. Running engages a lot more of the body muscles to propel forward, and each stride causes a shock through body of impact absorption — all of this serves to burn more calories. In a way it is like a car — when you accelerate it quickly and drive it at top speed, it burns through the fuel faster. Unlike a car, however, after your “trip” you get a bit of caloric “after-burn” from running that you don’t get from walking because your metabolism stays a little bit revved up for a while. Note that this after-burn, which is called Excess Post-Exercise Oxygen Consumption (EPOC) has be vastly overblown by some popular fitness gurus, but it does still exist to a degree and those numbers can also add up. (Check out my Los Angeles Times article about running and EPOC.)

There is also the fact that running at a high intensity has a lot of other positive effects on human physiology beyond benefits bestowed by running. So what I’m saying is, slowly pushing yourself towards a higher intensity is a good thing.

And what I’m really saying is: Push it!

James S. Fell, MBA, is a certified strength and conditioning specialist in Calgary, AB. He writes the column “In-Your-Face Fitness” for the Los Angeles Times and consults with clients on strategic planning for fitness and health. Get a free metabolism report at www.bodyforwife.com. Email James at james@bodyforwife.com.