Can you really get a workout from a video game?

Motion gaming is an active way to have fun as a family, if you do it right — fitness expert Tosca Reno gives some tips on picking a great game 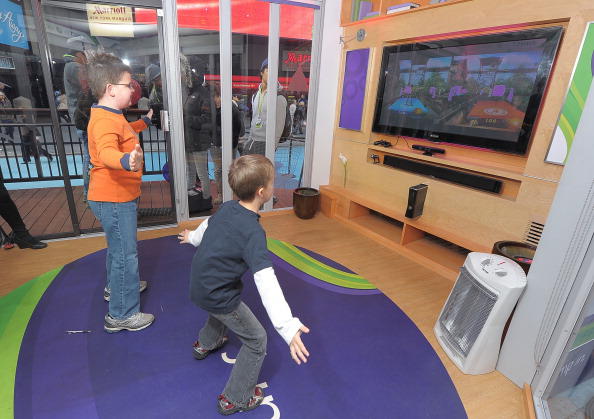 Usually, parents would rather see their children be more active instead of sitting on a couch playing video games. But with the emergence of motion gaming — where your body movement, with or without a controller, controls the action on the screen — views on video games are beginning to change.

Sixty-four percent of parents are more likely to allow the newer, more active video games in their home, while 35 percent believe it’s a great way to spend time with family and friends, according to a recent Harris Decima survey cited by Sharon Vinderine, CEO and founder of Parent Tested, Parent Approved Media.

“It’s a new way of thinking about gaming,” said Vinderine. “Usually parents think their children are going to be sitting on a couch and holding a remote all day. But [motion gaming] gets them up, active, and fit.”

What is motion gaming?

Nintendo was the first gaming company to offer motion gaming when they released Nintendo Wii in late 1996 — it became the fastest-selling game console in history. Last year Sony released Playstation Move, which uses a high-speed camera and a motion controller with a sphere attached to the end, allowing a camera to pinpoint every movement and position in the room.

Last October, Vinderine, along with her PTPA team, tried Microsoft’s then-unreleased version of motion gaming: Kinect for XBOX 360. Kinect tracks movement with a camera, which requires players to use their bodies to control the games they play.

The Kinect system won the PTPA’s seal of approval. “Overall, it was a resounding success,” said Vinderine. “There was nothing they hated about [it].” She believes Kinect is a great way for families to spend time together, as it’s suitable for all ages.

Vinderine also thinks that motion gaming is a great way to stay physically active. “With the Canadian climate, kids are spending a lot less time outside, mainly because parents are way too cold to go outside and play with them. This type of gaming keeps them active.”

Do you get a workout with motion gaming?

Studies have shown that motion gaming can help children use up to twice as much energy as walking on a treadmill. The added benefit is that motion gaming is more likely to keep a child’s attention than traditional forms of exercise.

But the health gains aren’t only limited to kids. These games can provide physical benefits for the elderly, such as improved sense of balance, coordination and strength, and help with the prevention of falls. They also provide psychological benefits, helping senior citizens with depression, regaining a sense of place and relevancy, and bridging the generational gap between grandparents and their grandchildren.

Fitness columnist Tosca Reno gave us some suggestions for choosing a motion-based video game that will get you moving and be fun for everyone in the family.

1. Know your limits: Be honest with yourself about how fit you are, and if there are any movements that are problematic for you. Stay away from games that could lead to injury, Tosca said.

2. Stay G-rated: Avoid games that involve violent or dangerous activities, like first-person shooters or fighting games, she suggested. If you enjoy target practice, look for something like an archery game.

3. Get into it: Motion-based gaming won’t do you any good physically — and will be a lot less fun — if you just slouch on the couch and wave the controller around. Stand up, move around and really give it your all, Tosca said.

4. Make space: You don’t want to break a vase (or someone’s nose!) while swinging your arms around. Set up your video game console in a room that offers a lot of room to move around.

Some may feel that motion gaming isn’t an adequate way to stay active, but fitness experts argue that any sort of movement is important. “In truth, some of our children and adults are in such dire need of physical exercise, almost anything that gets them [on] their feet and moving around will do,” said Reno, author of The Eat-Clean Diet Stripped. “If [motion gaming] can get people off the couch, then go for it, but don’t stop there.”