Bike your way to a fitter, happier you

Swap your steering wheel for a little eco-friendly pedal power. You'll save cash, boost energy and beat traffic — not to mention sculpt a slim and sexy lower body! 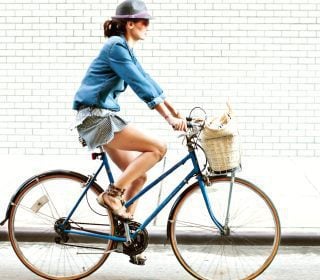 Look around the streets of any major city today, and it’s obvious that the cycling landscape has changed. Once the domain of a lone spandex-clad athlete, the road now hosts throngs of well-heeled cyclists pulsing along, baskets and backpacks stuffed with lunches and laptops.

I joined this new breed of cyclists a few years ago, after I’d had it with elbowing my way onto yet another packed subway and needed to find a new way to get to work. Walking was too far, a car too expensive, so I bought myself the Golden Chariot, aptly named for her glamorous golden sheen. Riding was a matter of pure practicality at first, but the Chariot soon became my trustiest of friends, helping me zip past gridlock, giving me an excuse to skip the gym (hey, I was already getting cardio!) and melting the stress of the day away. It wasn’t long before my bike commute turned into one of my favourite parts of the day.

Biking to work is skyrocketing in popularity, says Richard Backus, a cycling advocate and president of Bike to Work, British Columbia’s leading bike-safety training program. “And women make up our largest group of new riders,” he says. This commuting change in gears is fuelled by bike-friendly workplaces with showers and secure lockers, more bike lanes and innovative bike-rental services like Bixi, an initiative that began in Montreal in 2009, spread to Ottawa and Toronto, and is now expanding across North America and Europe. A recent Statistics Canada survey offers a simpler reason for the dramatic spike in the number of people who get to work by bike: It’s fun. Almost 70 percent of cyclists say they’re very satisfied with their commute — far better than 32 percent for drivers and 25 percent for transit riders.

Look ma, no flab!
Natalie Fortier can attest to the benefits of bike commuting. The 29-year-old Ottawa chef started working out with a trainer last spring, but she soon decided the free 35-minute ride to and from work was more useful. She’s lost nearly 40 pounds.

“I go to the gym, but I’d much rather ride my bike,” she says. “Once you get going, you feel so good — it really wakes you up.” Her ride is also well-deserved me time: an hour a day on her own to enjoy the picturesque Ottawa River Pathway.

Cycling to the office has made her fitter,too. “Why pay money to go to a gym when you can just wheel your bike out the front door and start pedalling?” she says. “You get exercise, meditation and transportation — it’s bang for your buck.”

How To Ride Safely
Julia Hollingsworth, a 24-year-old student, bikes 7 km to and from her classes in Castlegar,B.C., near Nelson — a city designed with pulp-and-paper-mill trucks in mind, not tiny two-wheelers. It was a scary ride at first.

“Biking in Castlegar required expanding my confidence,” she says. “I was a kid the last time I rode a bike regularly, and I didn’t ride on busy streets the way I do now.” She says it was really helpful to ride the route to school together with her boyfriend a few times at the beginning. Before long, she was extolling the benefits of bike commuting to her girlfriends: the low cost, speed and energy boost. “It’s so convenient. But the thing I’ve noticed the most is that I feel way more awake in the morning,” she says.

If you don’t have someone to bike with, there are plenty of other ways to help you be safe on the road. First, make sure everything is in good working order (no squeaky brakes or rusty chains allowed). Of course, wearing a helmet is mandatory (see our favourite bike helmets picks!). Mirrors and a bell or whistle are also crucial to a well-outfitted bike.

Then it’s all about practice, practice, practice. “You have to think of yourself as traffic: Get in the lane if there isn’t enough room at the side of the road, because cars will really notice you. And use your bell,” says Backus. A confident cyclist also obeys traffic rules, signals before turning and checks over her shoulder.

What about showing up at work in sweaty business attire? It’s a legitimate concern, says Backus. He suggests giving yourself ample travel time so you can go slow and won’t need to change, or showering at your office gym or one close by, or just having a change of clothes at work.

Am I excited to break out the Golden Chariot this summer? You betcha. I can’t wait to rediscover my favourite city streets, alleyway shortcuts and that feeling of being connected to my neighbourhood. And I’m sure I’ll see more new faces, all ready to experience the amazing benefits of riding to work every day. So, you in?