For our August issue, we sussed out the secrets to success from 16 of Canada’s top Olympic contenders. They shared their best advice to help us mere mortals reach the top of our games — in sport and in life. 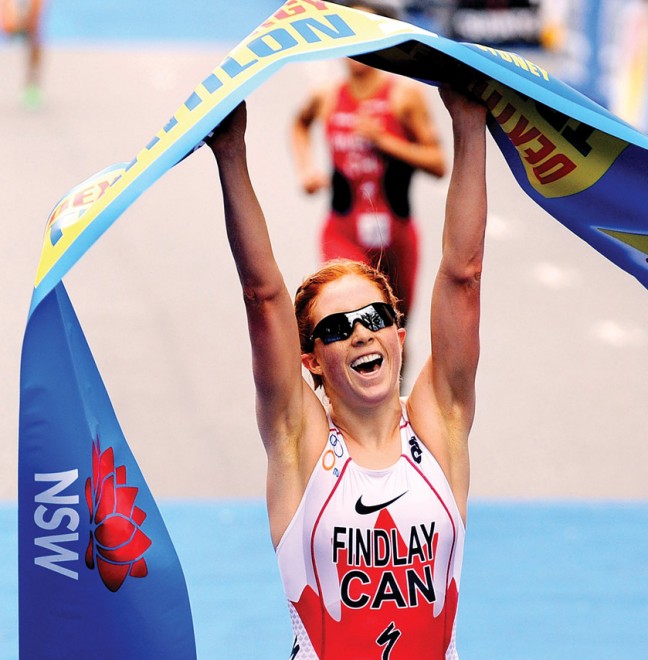 Here are 10 things I learned from my interviews with these incredible women. Some took place in locker rooms after their training sessions, others over the phone during their rest periods, but they all had these things in common: These women are serious go-getters. They are the never-say-nevers. They are in it to win it. And they are true champions.

1. You’re stronger than you know. There’s such a thing as physical self-esteem, and each Olympian athlete knows how to tap into this internal force. It’s not so much about how strong an athlete is, it’s about how strong she believes she is. This believing makes the difference between can and can’t, between pushing through the pain to reach the finish line, or even holding plank position for a few extra seconds in a workout. Physical self-esteem aligns itself with confidence and determination – it’s what allows an athlete to test the limits of her strength to learn to trust what her body can do.

Boxer Mary Spencer briefly touched upon this idea when we spoke. She said, “You’ve got to believe you’re strong before you can show your strength.” And sometimes showing your strength means faking it until you make it. Spencer told me about how it feels to throw a knockout punch (apparently it’s like you’ve hit someone without your glove on). She said that your opponent must act strong even though that punch just rocked her world, “She’s got to keep a poker face even after she gets a hard body shot and act like it didn’t hurt. Because the minute you show weakness is the minute you start to lose a fight.” How do you find strength like that? It starts with recognizing your potential. As cyclist Clara Hughes told me, “There’s a beautiful excellence inside every single female on earth. You’ve just got to realize you have it and let it out.”

2. Sport is much more than exercise. It can be a form of artistic expression, an outlet for your emotions and a great release. When soccer player Christine Sinclair described her sport as “a moving art piece,” I finally understood why they call soccer the beautiful game. “It’s magical what we can do when we perfectly orchestrate our movements,” she said. Beyond the artistry, sport is also a place to feel our emotions – to get angry, spirited and assertive.

Wheelchair basketball player Cindy Ouellet explained to me that after she developed cancer in her hip at age 12, she was mad and upset. Then her physiotherapist suggested she take her emotions out on the court, and Ouellet hasn’t looked back since. “Wheelchair basketball became much more than a sport for me. It helped me overcome my cancer. I was able to channel my anger into something positive. Now my wheelchair feels like an extension of my body,” she said.

It’s a similar sentiment wheelchair racer Michelle Stilwell shared. She became a quadriplegic at 17 after a fall from a piggyback ride broke her neck, but she refused to let her injury slow her down. “I know I wouldn’t be where I am today without sport,” said Stilwell. “Through racing, I got stronger and I regained my independence.” She’s the only Paralympian to have won gold in two separate summer sports, wheelchair basketball and racing (in the 100-m and 200-m events), and she’s still shaving hundredths of seconds off her race times today.

3. Just get moving – no excuses! Spencer talked about exercise in terms of Newton’s laws of motion: “A person in motion stays in motion; a person at rest stays at rest. It’s as simple as that. Get up, get going.” Each Olympian revealed that they too struggle some mornings with rolling out of bed to do a workout, but they each summon the strength to get up and get going – and I think that’s the mark of a true champ. As Hughes said: “I commend people that I see in the gym working out so hard, being diligent and applying themselves to being in shape and feeling good. It’s a huge, huge thing.”

4. Respect (and welcome) your competition. This was one of my favourite things learned from the Olympians. Triathlete Paula Findlay has no trouble working hard. “If I want to be amongst the best, I’ve got to do my best,” she said. In order to be the best, she knows she’s got to consistently push herself to new limits, and that means seeking out tougher opposition. “Always respect your competition – that’s one of my best pieces of advice,” she told me. Stilwell recommends the same thing. “I love the competition and I thrive on it. I like the challenge of knowing I can do better.” And tandem cyclist Robbi Weldon discussed the importance of seeking out great mentors. “We learn a lot when we appreciate the success of others,” she said.

5. Chocolate milk is the perfect post-workout snack. Both Sinclair, captain of Canada’s national soccer team, and Marie-Pier Boudreau-Gagnon, a captain on the senior national synchronized swim team, said they love chocolate milk after a tough workout. Chocolate milk? Sinclair says it’s one of the best ways to repair and restore her muscles, and Boudreau-Gagnon confided it was a drink her coach encouraged her to swig back after tough training sessions. I did a little digging and apparently there’s something pretty special about chocolate milk. According to Gretchen Reynolds, one of my favourite health journalists, low-fat chocolate milk has the ideal ratio of carbs to protein to help replenish the body after exercise. She discusses one experiment that compared chocolate milk to sports drinks and water post-exercise. Chocolate milk not only helped athletes recover faster, it also helped build more muscle, lose more fat and improve their endurance. You can find out more in Reynolds’s latest book, The First 20 Minutes.

6. You can bounce back from anything. The road to victory is a long one, peppered by struggle, injury and defeat. Trampolinist Karen Cockburn really impressed me; she has literally bounced back from several knee injuries to win medals at multiple Olympic games (two silvers and a bronze, and she’s gunning for gold this summer). Cockburn said she learned from her injuries: “The whole experience taught me that my mind can overcome a lot and my body is capable of great things if I believe in myself,” she said. Spencer said her best learning experience is actually losing a fight. “It’s a chance to grow,” she said. “Our greatest glory is not in never falling, but in rising every time we do.”

7. Physical activity is empowering. Throwing a punch or kick is an awesome thing. Testing your strength in an endurance race is liberating. Not every athlete has the chance to literally enter the ring to fight, but each competition offers them the chance to struggle to push themselves to the limit, to wrestle with the pain and battle it out to the very end. That fight is impressive. Spencer summed it up beautifully: “In an eight-minute fight, you see what you’re made of. The fighter you are inside the ring is the fighter you are in everyday struggles outside it.”

8. A good support team helps you live your dream. Every athlete gets by with a little help from her friends and family. Boudreau-Gagnon relies on pep talks from her mother and sister. Hurdler Priscilla Lopes-Schliep credits her mother and her husband with helping her juggle her training schedule with taking care of her newborn daughter, Nataliya. Weldon says she found her strength through her parents. “A strong sense of family gave me the confidence to pursue my dream,” she said. For each athlete, winning a medal is the result of a team effort.

9. You’ve got to train your mind, too. Sometimes that means learning how to stay in the moment; other times it means knowing how to get outside your head to squash pre-game jitters. Taekwondo martial artist Karine Sergerie surprised me when she said she dedicated a few hours each week to seeing a sports psychologist. “It’s just as important as seeing a physiotherapist to keep my muscles in shape,” she said. In fact, Sergerie said she feels strongest when “my body and mind work together and my emotions don’t get in the way.” Swimmer Annamay Pierse and Findlay also spoke with sports psychologists to rebound from injuries and overcome losses. And Cockburn said she practises self-talk before competition: “I tell myself, ‘You got this, Karen. You can do this.’ Then I visualize executing a perfect routine.” I’d love to talk with a sports psychologist to learn just how the pros get (and stay) psyched up and ready to win.

10. Do what you love – inside and outside the gym. Each Olympian lives with passion and dedication. “I live to inspire; I believe in the possibilities; and I live with no regrets,” all-season athlete Heather Moyse told me. “Just as much as sport, helping others is deeply rooted in my being,” she said. Like Heather, every Olympian expressed how much they love their sport. Diver Jennifer Abel shared her words of wisdom: “Do what you love and love what you do.” Sinclair said, “Pick your passion and attack it. Go after it with everything you’ve got.”

How can you not feel inspired to get up, get out there and do whatever makes you happiest? Love of the game is what keeps these pros on top of theirs.