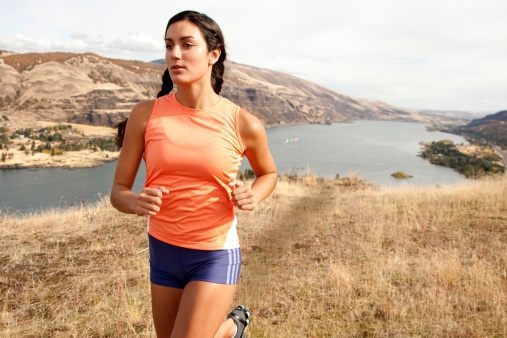 Gretchen Reynolds knows a thing or two about the overwhelming world of medical journals, health studies and research. As the writer behind the popular “Phys Ed” column on The New York Times ‘Well’ blog, Gretchen’s sifts through countless articles offering her advice and single-handedly changing the way millions of people exercise. Her book, The First 20 Minutes, will help even the most average of reader understand the science of fitness. The working mother and avid runner, whose work has also appeared in O: The Oprah Magazine, goes straight to the experts for answers that will maximize your goals. Read on for some surprising findings that will forever change the way you workout:

1. We were made to walk. A recent study, led by researchers at the University of Utah, worked with zoologists to compare human locomotion to that of cheetahs and gazelles (animals who are natural runners). They equipped athletes of different ages with face masks and asked them to run in three different styles measuring their oxygen levels for each. What they found was that running itself wasn’t efficient at all for humans, walking was. “We consume more oxygen to run than the typical mammal our size,” the researchers stated. So it seems if you’re looking to get somewhere walking, rather than running, would be the best option. If you’ve given running a try and it’s not for you, don’t feel bad — walking is a great way to lose weight and stay in shape while being the easiest on your body.

2. Justin Bieber can improve your workouts. “Our bodies are made to be moved by music and move to it,” says Nina Kraus, Ph.D. and professor of neurobiology at Northwestern University. A recent British study showed that men listening to high-tempo music while on a stationary bike sped up when their music’s speed was increased. So whether it’s Bieber, Beyonce or Abba, load your iPod with fast, upbeat music that will keep you keep you motivated.

3. Ditch the carbs. We’ve all heard of carb-loading but what most people don’t know is that if you’re intensely working out for anything under an hour you don’t need extra carbohydrates. Gretchen states, “If you’re not a competitive or serious athlete, you don’t need to be concerned with sports nutrition.” If you’re working out for more than two hours, she suggests eating a banana or Popsicle for energy — not an extra helping of pasta at dinner. Those of you chugging water while working out should stop that she warns noting that over-hydration has claimed more lives during recent marathons than dehydration.

4. Chocolate milk is better than Gatorade. While Gretchen discourages you from changing too much of your diet for everyday exercise, what she does encourage is reaching for low-fat chocolate milk post-workout. Containing, “an almost ideal ratio of sugars and proteins,” chocolate milk is perfect for energy replenishment instead of expensive protein shakes and powders. Canadian soccer star Christine Sinclair swears by this as well.

5. Weight train. Studies show that “any amount of weight training improved older people’s body composition”. On average older people that added weights to their routine added 1kilogram of muscle to their bodies which is impressive considering most people’s muscle mass actually declines after age 50.

6. Your birthdays don’t dictate your age. In a McMaster study, mice were watched to see how the effects of exercise affected the aging process. The results concluded that the mice who exercised regularly (in this case 45 minutes of running on the wheel, three times per week) aged at slower rates than the mice that didn’t do added exercise. After five months, researchers found the running mice were more youthful, had more hair and better balance. They were like, “little fury Betty Whites” they explained.

7. Sex can make you smarter. When male rats, in a Princeton University study, were given “sexually receptive” females, the resulting activity created an, “increase in neurogenesis in their brains.” Essentially, sex created new cells in the brain, a until recently, scientists thought was impossible.

8. Your run time does count. Gretchen suggests running a mile and timing yourself if you’re trying to break into the hobby. If you’re 40 and can’t run a 12-minute mile (or 1.6 kilometers) you are the least in shape of the spectrum. Aim for a nine-minute mile if you’re around 40, if you’re 30 or under aim for seven minutes. Just 20 minutes is enough to maximize health benefits. And when it comes to stretching, don’t worry about doing it beforehand, Gretchen’s advice is to simply start easy by walking for a few minutes before starting your run.

9. Take your runs outside. Running inside on a treadmill eliminates wind and change in terrain meaning if you’re running indoors you’re actually using five percent less energy than you would be running outside. If you live in Canada and running outdoors is only possible (er…tolerable) a few months of the year, the book suggests setting your treadmill to at least a level one incline to better simulate nature.

10. Move. Often. If you don’t exercise at all, the book encourages you to get out there for even five minutes a day. The physiological effects of movement start to work almost immediately. It’s never too late to start but just be sure you’re consistently adding length every few sessions. Your body and mind will thank you — studies show the longer you stick with a regular exercise routine, the greater reduction in your level of stress.

For more fascinating findings — like how many push ups you should be able to do and why you can stop doing crunches — pick up a copy of Gretchen Reynolds’s, The First 20 Minutes, $28. You can follow her on Twitter here.

Do you currently read Gretchen’s advice?