How Race Is A Risk Factor When Getting Treated For Fibroids

Most women will suffer from fibroids in their lifetimes—but for Black women, who are often neglected in health care settings, the threat is greater and more insidious. 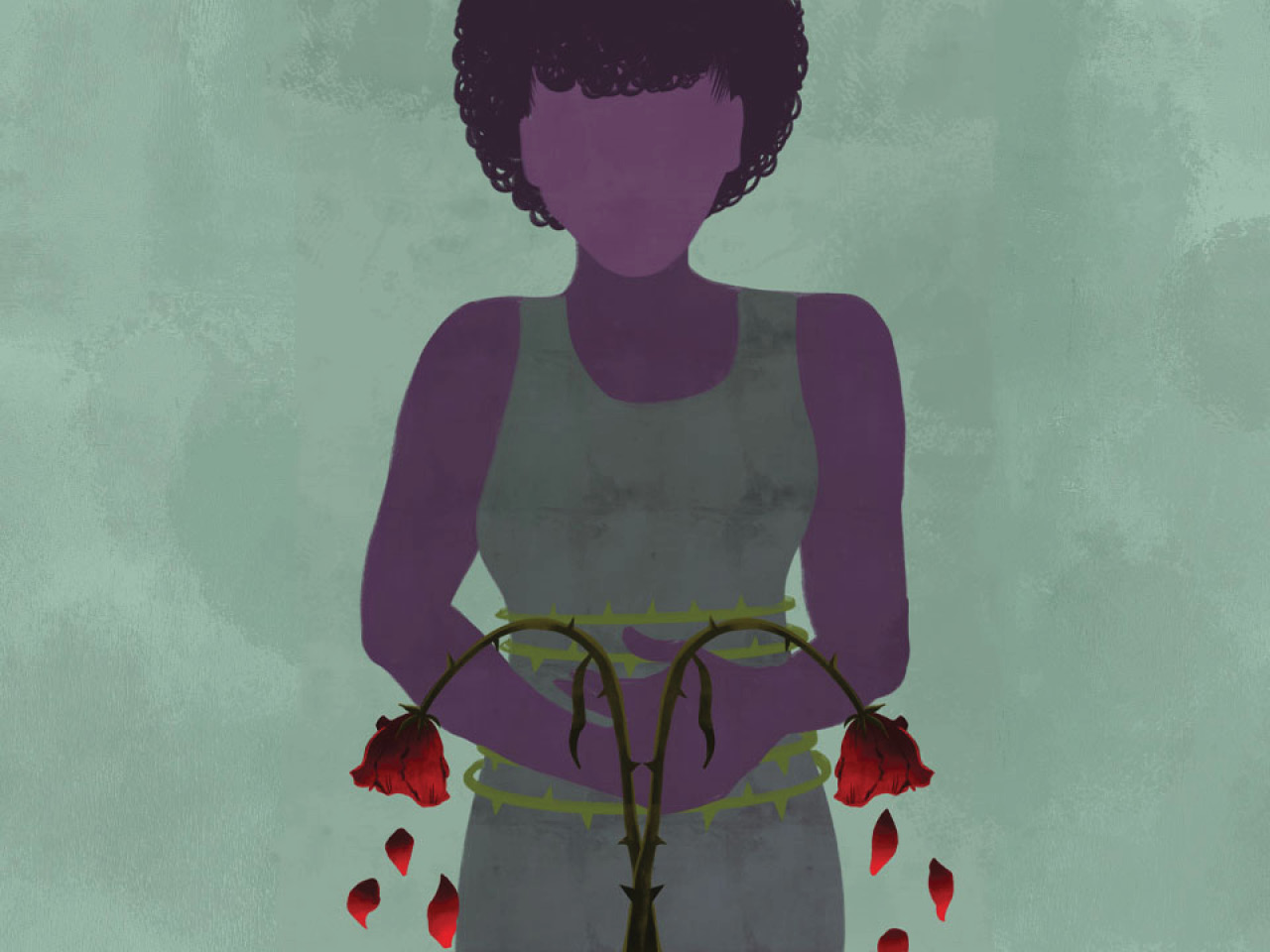 On an early march morning in 2010, I awoke to a pain that felt like a metal fist crushing my abdomen in its grasp. This sensation would repeat in an endless loop for three weeks. I was 32, four months pregnant and afraid.

I didn’t know it then, but growing alongside my son were unwelcome guests: multiple uterine fibroids, benign tumours attached to the lining of my uterus. They’d ballooned during the early weeks of my pregnancy—one as big as a grapefruit—and were now “dying.” At the time, I didn’t even know what fibroids were.

After my emergency hospital visit, I tried to but couldn’t secure an extra appointment with my gynecologist, since the receptionist took it upon herself to decide I didn’t need one. I later learned that my first ultrasound had revealed the fibroids, but I hadn’t been told. Despite my concerns, my doctor dismissed the tumours, a fact that disappointed me first and angered me later. My healthy son arrived on time, albeit by emergency Caesarean section. I didn’t receive follow-up treatment for the fibroids, and I wouldn’t for years.

Though it seems unbelievable, my story may be familiar—especially if, like me, you’re a Black woman.

Most fibroids grow in the uterine wall, though they can also grow outside it or in the uterus itself. Up to 40 percent of women older than 40 have them, and prevalence increases with age until menopause. Around 20 to 50 percent of fibroids are symptomatic, boasting a group of symptoms that include heavy periods, anemia, pelvic pressure and chronic pain, as well as fertility and pregnancy challenges. Fibroids can enlarge or misshape the uterus and aggravate the bowel or nearby organs like the bladder. Degeneration, which I’d endured, often happens during pregnancy, as the blood feeding the fibroid diverts to the baby.

The data is clear: Race is a risk factor.

No one knows what causes fibroids or how to prevent them, so it’s like carrying around an explosive device with an invisible countdown to detonation.

If nine people report one experience but a 10th reports the opposite, that result is probably an outlier, right? But if you’re that one in 10 experiencing daily pain and discomfort, you want a doctor who doesn’t make assumptions. Otherwise, the help a patient needs can be trapped on the other side of an individual doctor’s opinion.

Dr. Jamie Kroft agrees. An ob-gyn and surgeon at Sunnybrook Health Sciences Centre in Toronto who treats fibroid and endometriosis patients, she notes that once doctors mischaracterize fibroids as harmless, they’re more likely to be dismissive when women ask for help.

“Seventy-five percent of women report painful periods, so unless your doctor screens for other symptoms or commonalities, dismissal is possible,” says Kroft. “Add how little women know about what’s ‘normal’ for periods and you have a problem affecting their quality of life left untreated for years.”

Jonsaba Jabbi, 31, a communications specialist and writer in Toronto, was surprised to learn in 2018 that she had a fibroid, following an ultrasound for abdominal pain she’d thought was a flared appendix. “The doctor told me I had a medium-sized fibroid on my uterus, and I was alarmed,” she says. “I think of myself as a healthy person, and suddenly, I wasn’t.”

Jabbi grew up hearing about fibroids from her mom, who had several removed in the 1980s. Jabbi tried to follow up with her doctor in September 2020 after noticing changes in her periods. The doctor, explaining that she had no serious symptoms, told her to wait until the pandemic subsided to schedule an ultrasound. They did notice hormonal changes, but told Jabbi those changes could be attributed to weight gain. “It’s just really frustrating because I feel like I’m waiting for something to happen instead of being proactive about my health.”

For many, the symptoms of fibroids can be demoralizing. But when you’re a Black woman, advocating for yourself in the health care system is necessary, especially when experiences of neglect and disbelief have long been documented. Imagine living with chronic back pain, digestive challenges or the onerous fatigue of chronic anemia, or missing out on social or career opportunities because your heavy periods demand it, and being made to wait until your circumstances are urgent and dire. Meanwhile, your quality of life crumbles.

The surprise was more violent for Sabrina Young Blair, a 44-year-old licensed social worker and psychotherapist from Ajax, Ont. “I was six months pregnant when I felt a sudden, unrelenting abdominal pain,” she says, speaking of her first pregnancy in 2012. “I called my midwife, scared. She said, ‘It’s your new normal. Sounds like round ligament pain,’ which sounded like ‘Suck it up, buttercup.’ ” Young Blair already knew she had fibroids, but they’d been downplayed by her family doctor. “The doctor didn’t seem to care, so neither did I.” Her midwife never followed up on her abdominal pain.

Instead, Young Blair went to the emergency room, where they diagnosed her degenerating fibroids. The attending ob-gyn took her on as a patient on the spot, putting her on bed rest until her full-term delivery. She has never received treatment for her fibroids. According to Kroft, it’s common for the pain to go away after pregnancy, which is what happened for Young Blair—though flare-ups persist to this day.

Few options exist to treat uterine fibroids, and for the most part, a hysterectomy is the only permanent solution—approximately 30 percent of hysterectomies in Canada are done to treat fibroids. Procedures like uterine artery embolization, which cuts off the fibroid’s blood supply, or laparoscopic myomectomy, which removes only the fibroids, preserve fertility and delay more invasive methods. But with these options, there’s a 40 percent chance the fibroids will return within five to 10 years.

Access to these procedures varies across Canada, as do the comfort and knowledge levels of doctors. Both factors influence whether you receive timely and appropriate treatment. Add in racial bias, and the outlook is more dismal. Research data proves that racial bias in pain perception influences treatment recommendations. Even some experienced medical professionals perceive Black women’s pain as less serious than that of white patients because of pervasive false beliefs about biological differences.

All the women I interviewed for this piece are Black, but there are substantial gaps in the race-based health data collected in Canada.

A report on inequities in health for Black Canadians, released in September 2020 by the Canadian government, states plainly that health inequities are more than just a difference in numbers—they result in unjust differences in care. Still, the lack of sufficient data means we have an inaccurate picture of the health realities and experiences of Black Canadians.

In their study “Dying to Learn: A Scoping Review of Breast and Cervical Cancer Studies Focusing on Black Canadian Women,” researchers including the University of Toronto’s Aisha Lofters, Onye Nnorom and Nakia Lee-Foon found a dearth of health research on breast and cervical cancer in Black Canadian women, with women from sub-Saharan Africa appearing to have lower cervical and breast cancer screening rates, likely putting their health in greater jeopardy. Lee-Foon noted that insufficient data means the inability to prove claims of race-based discrepancies regarding treatment and care.

After enduring the long list of physical, emotional and societal effects of fibroids, apathy from those qualified to help adds insult to injury.

A hysterectomy was one of the only treatments offered to Nadine Djimbi Ayaba, 37, a mutual investment company vice-president based in Montreal. Diagnosed with lupus in 2006, she had a checkup in 2016 that sparked her fibroid journey.

“My session was quick,” she says. “The doctor told me I had fibroids, but I spent more time talking to the resident. They didn’t take the time to explain or answer questions. I left feeling dismissed and lost.” Three years later, she was back for answers, and an ultrasound revealed five fibroids. This time, hysterectomy seemed to be the only treatment offered, even after she asked her doctor for other options.

“I was just asking questions,” Djimbi Ayaba says. “I told her I hadn’t decided whether I wanted children and wanted to keep the option open. She jumped to a choice that’s mine to make.”

She wasn’t diagnosed with fibroids until 1975, after immigrating to Canada. Her suffering continued until a fateful referral to a new ob-gyn for my siblings’ births. “Meeting that doctor changed everything,” my mom says. “He took my suffering seriously, saying, ‘Let’s talk when you’re finished having children.’”

They did. At 33, my mom had a partial hysterectomy—no more fibroids or symptoms. My mom doesn’t understand why, a generation later, her daughters’ experiences match hers. My sister has fibroids, too. This past May, the largest of her five fibroids wrapped itself around one ovary, causing acute abdominal pain. She ended up in the ER and had the offending fibroid removed via an emergency myomectomy within two days.

Despite the often dark outlook, there is light on the horizon, teasing brighter days for fibroid sufferers. Kroft is hopeful about trends in research, care and treatment. “I’m excited by the focus on early and less invasive treatments, more patient-centred research and exploration into possible genetic factors.” She adds, “This all leads to improving the quality of life for sufferers, faster.”

I think the most exciting changes have little to do with data.

“I’ve noticed a cultural shift in medical training with more engagement and sensitivity toward ethnic groups,” says Kroft. “Incoming residents are more cognizant of race and gender bias and misinformation. It’s very encouraging for the future of care.”

Things are moving in the right direction, but it’s hard to keep faith when the progress is slow and finding answers remains a non-priority.

Until I can say with confidence that you won’t have an experience like mine or those of countless other sufferers, that you’ll get the treatment you deserve at the time you need it, we continue to wait while the silent timer ticks.