Everything you need to know about overeating

We asked David Kessler, physician and author of The End of Overeating, how to break free from our junk food cravings 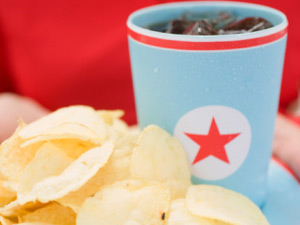 Why are we drawn to foods — potato chips, cookie-dough ice cream — that are so obviously bad for us?
We’re all wired to focus on the most salient stimulus in our environment. If there’s a fire next door, we’re focused on that fire. For some people it’s drugs or gambling or alcohol or nicotine or sex. But for many of us, it’s food. What is it about food that makes it salient? Sugar, fat and salt. And when you layer those three ingredients together — as is the case with highly processed foods — food becomes hyper-palatable.

In your book you talk about conditioned hyper-eating — what is this?
There are three qualities that conditioned hyper-eaters possess: They have a loss of control when they face certain foods, they often don’t feel full even if they’ve eaten a lot, and they’re preoccupied with thinking about what they’re going to eat next.

Is this common?
Half of obese people, 30 percent of overweight people and 20 percent of people at a healthy weight score very high on these characteristics.

What are the cues, as you call them, that can lead to overeating?
A cue can be the sight or smell of food, a location where you’ve enjoyed the food before, the time of day or even being in your car. It can lead to you eating the food, and then you develop this cue-arousal-reward-relief cycle. Each time you indulge, you strengthen the possibility that you’ll do it again. Every time I fly to San Francisco, for example, I start thinking of these great Chinese dumplings they sell at the airport food court. In that case, the plane landing is my cue.

Is it just a matter of avoiding those cues?
You can get rid of some cues, but then you turn on the TV or walk down the street and another cue might hit you. What you have to do is cool down the stimulus itself.

And how do you do that? It’s hard to imagine how we can make the foods we crave less appealing.
The first step is to impose some kind of structure in your diet. If you know when and what you’re going to eat next, the cue is not going to have as much power over you.

You also advocate eliminating any foods that make you lose control.
I know that if I start eating french fries, I am going to finish them. It’s just easier to have a rule that says I can’t eat them at all.

How much fun is that?
Look at the tobacco industry. We used to think that cigarettes were our friend, but now we view them as the enemy. We need to think the same way about highly processed foods.

Is it possible to train ourselves to lose interest in foods that we previously desired?
You can’t get rid of the old cue-arousal-reward-relief circuitry in your brain, but you can lay new circuitry overtop of it. We need to change what we want; we need to align our desires with food that is healthful and satisfying. I used to like highly processed food, but now I don’t think of it as real food. I know it’s not going to satisfy me. You really have to change the way you look at food.

Is it also possible to train ourselves to eat less food?
While researching this book, I realized I was eating double or triple what I really needed. These days, I eat a fraction of what I used to eat, but that’s what I want and it’s pleasurable. My perception of whether something is really going to fill me up is key — if I think a certain food will satisfy me, my brain is going to form a positive association with it.

In your book, you suggest we eat half of a typical meal and then gauge how hungry we are — first 30 minutes later, then 90 minutes after that — as a way to determine how much we really need to eat. But you don’t necessarily advocate calorie counting or keeping a food journal. Why is that?
Both calorie counting and journalling can work, but in some ways they make food an even bigger part of your life, a constant white-knuckle struggle.

You’re also adamant that diets don’t work.
You can want to be thin, you can try to deprive yourself, but that’s not going to work in the long run. The issue isn’t just weight, it’s how we view food. And unless that changes, the brain’s reward pathways are always going to win out.

How long did it take you to reshape your eating habits?
Years. If I’m tired or stressed and I’m stuck in an airport and there’s nothing healthy to eat, I can still overeat and I understand that.