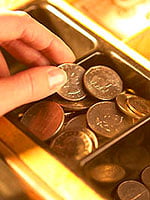 You gotta eat, and sometimes you might even have to feed others. Wouldn’t you love to hear that it’s possible to get delicious meals on the table and save a few bucks on your grocery bills? Well, you can trim your food budget without surviving on bologna, processed cheese and Wonder Bread. When I started this assignment, I was shocked to learn that my husband and I spent more than $150 a week on groceries for just the two of us (especially when I discovered that the average Canadian couple spends $83!). After three weeks of using the tips I’d gathered from regular women and bargain experts, I had cut our food costs by about 30 per cent. Read on for advice on how you can start saving, too.
Decide what convenience is worth
· Would you pay someone $80 an hour to shred your cheese? According to nutrition researchers at Arizona State University in Tempe, that’s what you could be forking out if you’re not doing it yourself. They compared the cost of ready-to-eat foods with the time it takes to make the same items from raw ingredients to come up with that whopping figure. So, if your priority is saving money over saving time, do the work in your own kitchen – the researchers also found it only takes 1 1/2 minutes to grate a pound of cheese by hand.
· Stick to jars, say Anna Wallner and Kristina Matisic, bargain experts and hosts of the W Network’s The Shopping Bags. Products in squeeze bottles are much pricier and make it difficult to get all the food out of the container.
· We spend more money on prepared entrees than we do on any other item in the grocery store, according to ACNielson. Beccy Kennedy, a mother of 11 kids in Sexsmith, Alta., with eight still living at home, triples her recipes so that she can freeze portions for later. “It doesn’t take any more work to make three batches of chili at one time than it does to make one batch,” she says. For example, you can make eight to 10 servings of lasagna for what you’d normally pay for just two prepared entrees.
Get meaty deals
· On average, meat purchases eat up about 20 per cent of your grocery bill. Buy what’s on sale and freeze it to enjoy later and you could save up to 50 per cent.
· Nicole Burtch, the cook at YWCA Halifax, knows how to feed people on a budget – she’s responsible for food preparation for a women’s residence and a day care. Her advice: if you’re not afraid of a little work, buy meat that’s still on the bone, such as a whole chicken, instead of opting for packages of pricier boneless chicken breasts.
· Love to chow down on roast beef sandwiches? Chris DeVries of Kamloops, B.C., buys meat ends at the grocery store and slices them at home, cutting her deli bill in half.
Go with a plan
· If you usually give in to impulse buys, bring just enough cash to cover what’s on your list. Up to 50 per cent of what you end up carting home from the grocery store wasn’t on your original shopping list, says Pat Foran, author of Canadian Consumer Alert: 101 Ways to Protect Yourself and Your Money (McGraw-Hill).
· Watch out for the word “special,” advise Wallner and Matisic. Marketers know it attracts shoppers, but the experts point out that “special” doesn’t necessarily mean an item is on sale. Pay attention to the price, not the label.
· Look up and down instead of at eye level when scanning shelves. It’s no coincidence that the more expensive national brands are placed where you can see them best, or that finding a few staples requires passing the junk food aisle more than once.
Eat your greens
· Food co-ops save members heaps of cash by buying large quantities from wholesalers. Sally Speers is one of the organizers of The Fruit and Veggie Deal, a Vancouver-based co-op that provides members with boxes of produce, helping them save about 50 per cent. Co-ops, also called buying clubs, aren’t just for fresh food; Jennifer Gleason of Bradford, Ont., and her casual buying club order large quantities of dry goods from a wholesaler every few months, saving them about 20 per cent.
· Buying directly from a grower at a farmer’s market is always cheaper (for example, you could pay about 75 cents for a head of organic lettuce compared with $1.50 at the grocery store). You can save even more if you find a farmer who will sell you second-grade produce. Jonathan Woods, farm manager of PICS Colony Organic Farm in Coquitlam, B.C., says many organic farmers toss one-third of their crop because markets often prohibit them from selling non-cosmetically perfect produce. Woods sells top-grade organic tomatoes for about $3 a pound but will part with a pound of second-grade tomatoes for just $1.
· Skip the produce aisles at the grocery store, advise Wallner and Matisic, and head across the street to the corner fruit market. Prices are often up to 50 per cent lower, and high turnover guarantees freshness.
Be a coupon queen
· Kimberley Clancy, founder of www.frugalshopper.ca, knows how to use coupons. Last year, she went on a shopping trip with a TV journalist to showcase her skills. They each bought the same stuff, but Clancy used coupons. She spent $24; the journalist spent about five times as much. To maximize savings, combine sales with high-value coupons, says Clancy, which can often be found in newspaper flyers and in stores near the products being promoted.
· If you always buy the same brand of, say, popcorn, check the package and call the company’s customer service line: many manufacturers have coupon mailing lists you can join. Also check www.save.ca, which sends out coupons on behalf of manufacturers.
· Can’t cope with coupons? Scan your supermarket’s weekly flyer – without even opening it. The best sales are found on the front and back covers of the flyer, say Wallner and Matisic. Plus, adds Sandra Phillips, author of Smart Shopping Montreal, the bigger the picture, the better the sale.