Tips for fresh, local eating by scouring farmer's markets instead of heading to your usual big chain grocery store 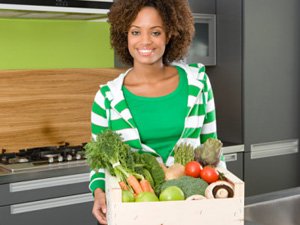 Turn your weekly grocery run into a stroll in the sunshine – and turn your eating into a local, sustainable affair. Farmer’s markets across Canada are preparing to unfurl their tents. To make the most of these weekend markets, read on for our tips:

Meet the growers
“People like to meet the person growing their food,” explains Mary Forstbauer of Chilliwack, B.C. She’s been an organic farmer for more than 30 years, and she’s also the president of the B.C. Association of Farmers’ Markets and the vice president of the Canadian Association of Farmers’ Markets. You can ask a farmer directly about her farming methods, including whether she uses pesticides and herbicides. While there are plenty of certified organic producers –like Forstbauer – offering chemical-free fruits and vegetables, don’t assume that all vendors are selling organic without asking first.

Eat locally
Food that is grown locally is at the mercy of the seasons. Apples are always abundant at the market, but other items depend on the month; that means waiting until July for blueberries and August for corn. Although those vegetables are available year-round at grocery stores, consider that an off-season blueberry has travelled thousands of kilometres to make it into your kitchen. And produce that’s destined for grocery stores is often harvested before it ripens to sustain its shelf life of two to three weeks. The produce at farmer’s markets is picked fresh and ready-to-eat, usually within the last 48 hours. And there’s much more than just fruits and vegetables – fresh meats and baked goods, honey, spices, olives, pickles, oils, jam and other foods you don’t normally find in grocery stores, such as fresh artichokes.

Shop wisely
Take a notebook to jot down prices for comparison, suggests Forstbauer, who notes that “it’s a myth that farmer’s markets are cheaper than grocery stores.” You can get some good deals during harvests, but otherwise, expect to pay the same for produce as you would at grocery stores. (And bring cash – most farmers don’t accept credit cards.) So what’s the payoff? By buying your produce at markets, you’re supporting local farmers and you’re guaranteed that the food you’re eating travelled from the dirt to your dinnerplate in less than three days.

Most of our farmer’s markets are open May through October, Canada’s main growing season. For a list of local markets and their hours, find your province’s farmer’s market association on the Farmer’s Markets Canada website.