Does the Shake Weight really work?

A friend of mine shared this video of a newscast with me on Facebook about classes for using the Shake Weight, and I laughed my way through most of it. 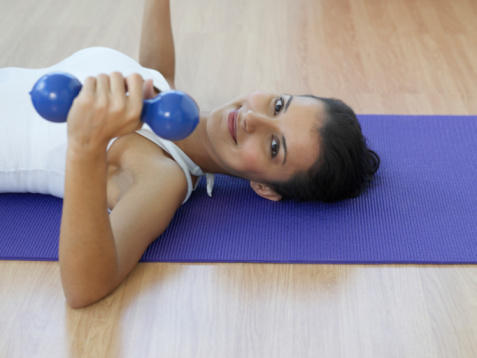 A friend of mine shared this video of a newscast with me on Facebook about classes for using the Shake Weight, and I laughed my way through most of it.

There’s some thinly veiled sexual innuendo and bad puns, of course, but what really amazed me about it is that, according to the video, 4.5 million of these things have been sold. Although really, I shouldn’t be that surprised, because in 2007 the Federal Trade Commission launched a massive survey of consumer fraud in the U.S. and found that people were more likely to be taken in by a weight-loss scam than any other type of fraud. It’s not all “bank inspectors” and pyramid schemes; in 2006 fraudsters scammed five million Americans looking to lose weight by selling pills, powders, machines, wraps, creams, and even earrings. Yes, some people thought wearing special earrings would help them lose weight.

So what’s the deal with the Shake Weight? Well, if you want my “almost 18 years of weightlifting” opinion of it, the thing is a joke. It’s a light dumbbell that shakes back and forth, supposedly toning up your arms.

Oh, and that asterisk after dumbbell? I can’t find what it refers to. I scanned the entire page and couldn’t find any reference to back up that claim about it generating 300 percent more muscle activation. There is no second asterisk.

So what about using it in a class?

Honestly, the only benefit I can see this having is entertainment value. I can see people going to this class just so they can laugh their butts off. Watching the video, I can see that some of the people in the class can barely contain their mirth. I would expect a good belly laugh burns more additional calories than the Shake Weight does.

And I’m not sure if they really want us to take them seriously or not, or how many of these things were purchased as gag gifts for a bridal shower. I mean, just look at the video. The jokes practically invent themselves.

So, yes, the Shake Weight is good for a laugh, but I scoff at the claims on the website. It’s not better than a dumbbell, because the one for “women” is a measly two-and-a-half pounds, whereas the man-sized Shake Weight is a whopping five pounds. You won’t get much in the way of results from such light weights.

And six minutes a day? Well, that’s, of course, bogus. Even if you do it seven days a week, then that’s only 42 minutes a week, which is barely anything at all. Even in an intense class with a lot of dancing around with the weight, 42 minutes a week won’t accomplish much.

So maybe buy one as a gag, but not as a serious fitness tool.