The dominant strain is H3N2, which hit hard in 2014–15. The good news? This year's flu shot should be a better match for this bug. 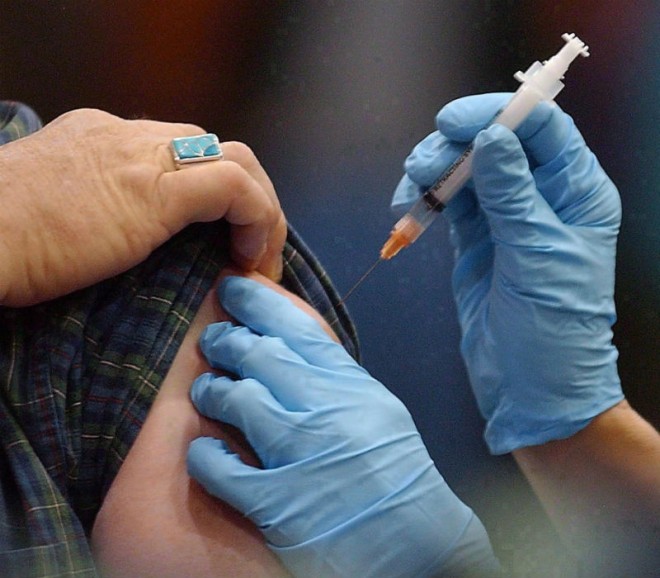 As of Dec.3, 1,373 lab-confirmed influenza cases had been reported to the Public Health Agency of Canada. Photo, Toby Talbot/CP.

Yup, flu season is back. And not only is the winter scourge starting early this year, it’s on track to be a major spoiler for holiday festivities, infectious-disease specialists predict.

“Already we’re getting quite early indications of H3N2 activity, and in some places that is likely to escalate over the coming weeks and then may further amplify during the holiday period when there is increased social mixing,” Dr. Danuta Skowronski, an influenza expert at the B.C. Centre for Disease Control, said from Vancouver.

“So we may be seeing high, if not peak levels of activity over the holiday period this year,” she said, “which reinforces that influenza is the original Grinch that stole Christmas.”

H3N2 is the dominant influenza strain circulating in Canada so far this season, and that has public health experts concerned: H3N2 can be a particularly nasty form of flu that’s associated with increased hospitalizations and deaths, especially among the elderly.

“This year, we’re picking up early signals and so, too, are other places in Canada,” said Skowronski. “And in fact, we’ve already had a comparable number of long-term care facility outbreaks due to H3N2 as we had during that particularly bad season in 2014–15.”

The 2014–15 flu season was not only tough because H3N2 was dominant—with a record number of cases and hospital admissions—but also because of a serious mismatch between the vaccine components and the influenza strain subtypes circulating in the community.

The vaccine was designed to prevent infection with two A strains, H3N2 and H1N1, and a milder B strain, based on recommendations made by the World Health Organization at the end of the previous flu season. But by the time the vaccine was produced and injected into arms, the circulating H3N2 virus had genetically mutated and protection afforded against it was virtually nil.

Influenza experts called it a “perfect storm” of conditions that led to the vaccine being less than 10 per cent effective in preventing cases of flu among the population; the annual inoculation typically reduces the risk of contracting the flu by about 40 to 60 per cent.

Skowronski is more optimistic about this season’s shot because the H3N2 subtype it contains—along with H1N1 and B Victoria—appears to be a closer genetic match to what’s now circulating.

Although most people get a shot, children aged two to 17 can opt for vaccination with a nasal spray called FluMist, which protects against four strains, using what’s called live attenuated virus. (Babies under six months are too young to vaccinate; from six months to two years children are given only injectable vaccine.)

The U.S. has stopped using the nasal vaccine after some studies found it ineffective in preventing H1N1. But Canada, the United Kingdom and Finland have continued to endorse its use.

“We did see some reduced protection for the H1N1 component with the live versus the inactivated (injectable) vaccine in children,” said Skowronski. “However, we did find protection. It was lower than the inactivated vaccine, but it was not zero.

“We didn’t have, in our minds, sufficiently strong evidence to say no to use of that vaccine,” she said. “So it remains an option in Canada, and particularly for those who are squeamish about getting an injection.”

Related: 8 things you can do every day to avoid the flu

Dr. Bryna Warshawsky of Public Health Ontario said the province is also starting to see flu activity, with more than 200 laboratory-confirmed cases, the bulk of them H3N2. But she cautioned those numbers are just the tip of the iceberg, as many people who come down with the flu don’t go to their doctor or get tested for the bug.

“So that’s probably a small proportion of what’s out there.”

Ontario already has seen close to a dozen outbreaks in health-care institutions, about half of them in long-term care facilities. As of late November, 50 hospitalizations and one death had been reported among people with lab-confirmed influenza.

Nationwide, 1,373 lab-confirmed influenza cases had been reported to the Public Health Agency of Canada as of Dec. 3, with 204 hospitalizations and several deaths.

To prepare for this flu season, the provinces and territories have purchased about 11.6 million doses of vaccine from five manufacturers at a cost of about $75 million, says the Public Health Agency of Canada.

And since 2004, the federal government has maintained a stockpile of antiviral medications, including oseltamivir (Tamiflu), in the event of an influenza pandemic. The drugs can reduce symptoms of the flu if given soon after infection and can also reduce the chances of getting the bug—although they are not a substitute for vaccination.

While public health officials would ideally like to see every eligible Canadian inoculated against the flu—uptake hovers around 30 per cent of the population—they stress that people aged 65-plus and those with an underlying health condition that puts them at risk for serious complications should get immunized.

“We recommend being vaccinated as early as possible, but this is still a good time to get vaccinated if you haven’t been,” said Warshawsky, explaining that it takes about two weeks for the immune system to build up protective antibodies.

“As we head into the holiday season, it would be good to have many people protected so they don’t spread it around.”

For those who do come down with the flu, the universal advice includes frequent hand washing, sneezing or coughing into the crook of the elbow, and keeping one’s distance from other people.

“Stay away from social gatherings… and stay away from the elderly. Don’t visit Grandma or Grandpa at the care home if you are acutely ill,” said Skowronski.

“People should do everyone a favour and not give the unwanted gift of influenza to their family members.”

More:
What you need to know about the flu shot
Three simple things you can do to avoid the flu
The one thing that could improve the health of all Canadians