Do you need therapy? Eight signs that you do 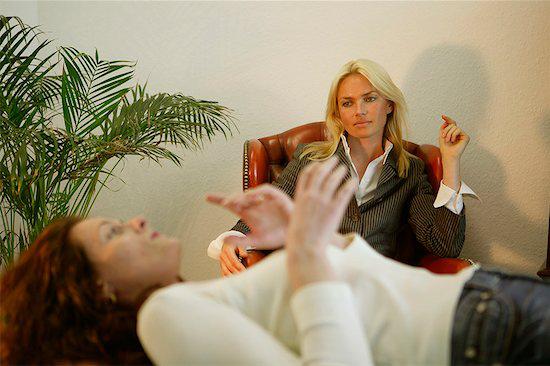 We could all use a little help

These days, we spend much time focused on our bods. But what about our brains? While many of us are immediately attentive if something seems a little off with our physical health, we too often let emotional issues stew and worsen year after year. Look, we could probably all do with therapy of some sort. (Thanks, Mom!) And while three-martini evenings with the girls can help to fill the gap, how can you tell when you should stop gabbing to the girls and get some help from a professional?

According to Sara Dimerman, a therapist in private practice in Thornhill, Ontario, there are a number of signs that indicate that you should seek out the services of an expert.

Eight signs you might want to talk to a therapist

1. If you’re unable to function as you normally do.

2. If you feel unlike yourself – if you’re sleeping a lot more, or more anxious, or less sociable, or just in a funk you can’t shake – then don’t simply resign yourself to a less-satisfying life.

3. If you’re dealing with an issue you’ve never dealt with before and it’s making you anxious and unsure about how to proceed. Every now and then, unprecedented situations might arise that make you feel stuck or uncomfortable. Talking to a therapist offers the chance to bounce ideas off a neutral party who doesn’t have a stake in the outcome.

4. If you need clarity or reassurance. We so rarely give ourselves time to sit in peace and think through the things we’re experiencing. But if you book a therapy session, you’re committing to an hour of sitting and talking through whatever is on your mind.

5. If you’re falling into old patterns or dealing with old issues that aren’t healthy. We all have negative habits and tendencies – be it smoking or possessiveness in a relationship – that we have to actively work to suppress. But if the battle starts to seem way more uphill, it’s a sign that you can’t handle it on your own.

6. If you’re tired of the same-old and want to gain greater insight into your behaviour. Sometimes we can get stuck and aren’t really sure how to make the changes we want to see in our lives. The right therapist can help show you why you make the choices you make, which should help you to make any changes.

7. If you can’t get past an interpersonal conflict. It’s common for family members to become estranged or even simmer indefinitely over the same old issues. Trying therapy can help bring the two of you closer together, or at least help you figure out how to stop contributing to the problem.

8. If you have difficulty moving beyond any particular issue in your life. Sometimes we have problem to address and don’t know where to start – whether it’s related to your love life, family life, self image or professional stability.

Better than your sister

If you don’t fall into at least one of those categories, you’re probably a real snooze at parties. But seriously, there’s no shame in asking for help and if you’re feeling stuck it’s far better to reach out than retreat. And, as Dimerman points out, one of the benefits of having a therapist is that they’re a neutral, confidential party whose energy is focused exclusively on your issues. “You’re taking on a service that allows you to spend 50 minutes to an hour talking about what you’re going through without any feeling that anyone is going to interrupt you,” says Dimerman. Your sister might be a good listener, but you can bet that she’s got a lot of biased opinions on why you really broke up with your boyfriend.

For some, therapy conjures up an image of twice-weekly visits to a bearded Freud disciple who mostly nods his head silently while his patient lies on a couch and rambles on and on and on about her childhood. (“Always late picking me up from soccer practice and never once ordered school portraits…”) But there are actually countless permutations and types of therapy. I have a friend who sees a therapist every now and then, whenever she has an issue to deal with or a tough decision to make. Dimerman, who counsels individuals, couples and families, says that she sees most patients once a week – finding that a break between sessions gives people time to reflect – for about six to eight weeks in a more “short-term, goal-focused counseling.” She says some patients come back once a year for a little boost, or even years later when they’re struggling with something.

How to choose the right therapist for you

So how do you go about choosing a therapist? There are all different types – from life coaches to psychology PhDs, so you have to make sure you find someone who has the skills, credentials and experience you need. If you’re depressed or suffer with anxiety, for example, you might look for someone who does cognitive behavioural therapy (CBT), which offers very practical exercises and steps. Dimerman cautions not to overlook rapport. “Even if someone has been in practice for 20 years and has a PhD, they might not be right if the two of you don’t click,” she says. You should be able to get a sense of whether someone can help you within that first or second hour. And therapy should – after some initial awkwardness – be something you look forward to.

People get all kinds of different results from therapy – some good, some bad and some mediocre. But with the right treatment, Dimerman says you can expect clarity, insight, reassurance, a feeling of being heard, a sense of being acknowledged and validated, a change in direction, and a greater willingness to consider change or personal growth. Sounds pretty good, huh? And it might even give you something to talk about with the girls over brunch.