Earlier this month, Statistics Canada announced that Canada now had its lowest ever recorded rate of smokers: only 17 percent of Canadians aged 15 and older were smokers in 2010, down one percentage point from the year before. 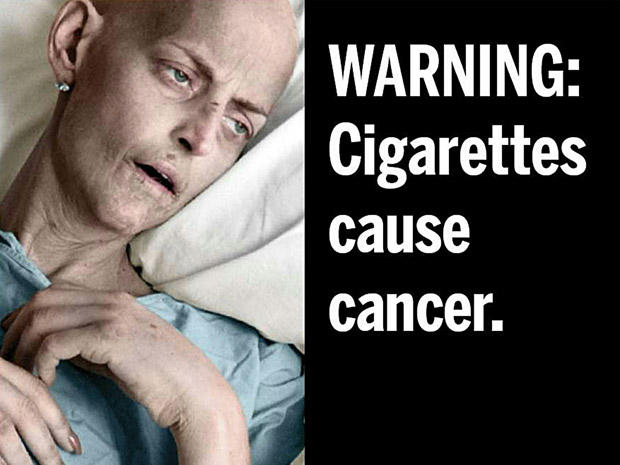 Earlier this month, Statistics Canada announced that Canada now had its lowest ever recorded rate of smokers: only 17 percent of Canadians aged 15 and older were smokers in 2010, down one percentage point from the year before. (Stats Can began monitoring the numbers in 1999.) But even with that drop, the government announced today that cigarette warning labels are about to get larger — and a lot more disturbing.

Warning labels about the dangers of smoking — which are well established and include lung cancer and emphysema — currently cover one-half of the surface of cigarette packages in this country, and have since 2001. Cigarette smoking has also continued to decline slightly every year since then. But surveys done by Health Canada have showed that consumers have become immune to the warning messages, which is why they’re becoming larger and more graphic. One image features a close-up of eye treatment for macular degeneration, and another shows a throat-cancer patient with a hole in his throat.

Health Minister Leona Aglukkak unveiled the new warning labels, which will cover 75% of a cigarette’s package, at a school in Ottawa. The widower and daughter of Barb Tarbox, an anti-smoking activist who died of lung cancer in 2003, were on hand to speak about the labels and their hope that they’ll help to stop young Canadians from taking up the habit and inspire others who already smoke to quit. “I just think that you guys should just never start and if you have, stop,” said Tarbox’s daughter Mackenzie, who is now 18. “Could you imagine telling your nine-year old daughter that you might not be there for Christmas?”

A photo of Tarbox is one of the images that will be featured on cigarette packages starting in June, along with a text warning of the risks of smoking, four messages about toxic emissions and a quit-smoking hotline phone number. The United States unveiled plans earlier this year to cover 50 percent of the surface of cigarette packages in that country with similar warnings, but a lawsuit from the tobacco industry has held up the change.

Do you think the new labels go too far, or are they an important step is helping to keep the smoking rate dropping?