Demystifying the 'I eat whatever I want' woman

You see them eating ice cream on Instagram, and read about those fries they ate during an interview, but do models and actresses really eat the things they say they do? Flannery Dean finds out. 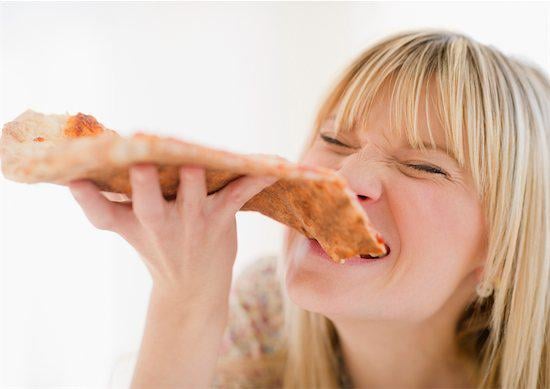 There are few things more maddening than listening to an infuriatingly hardbodied woman — one that boasts the lithe form and sculpted physique of a prima ballerina — proclaim that she doesn’t diet and never works out but instead lives on burgers and fries. And not the grass-fed organic kind either, but the $1.49 fast-food version.

Her secret to looking flawless, or so she says, is her enviable (read, entirely implausible) “metabolism”.

In a post for XOJane, writer Meghan Murphy vents about the ubiquity of this female type, particularly in films and TV. Murphy cites the recent film Drinking Buddies, which sees actress Olivia Wilde play a guy’s girl that “eats fries and drinks beer every day and goes to the bar after work with the guys she works with” yet still manages to maintain eight percent body fat, as an example.

The problem with this representation? It’s an illusion.

Writes Murphy: “This perfect-woman-who-acts-and-lives-like-a-teenage-boy creates a destructive ideal that is all but impossible for women to live up to. Yes, there are women who can eat cake for breakfast, drink their faces off every day and never gain a pound or get a zit, but it’s rare.”

I think I’d go further than Murphy and say it’s not rare; it’s an urban myth. And not even an interesting one.

But that hasn’t stopped the ideal from surviving outside of the confines of crappy rom-coms and gross-out male comedies. According to Murphy, Instagram has become rife with images of supermodel-esque women espousing their love of cronuts, poutine and other fatty foods, which is about as believable as the plot of Drinking Buddies.

Like Murphy, I roll my eyes (and occasionally let out a deep sigh) when I’m stuck watching a film or TV show where an impossibly-perfect looking actress feigns an affection for chicken wings, strip clubs and draft beer. And that old ‘guys’ girl’ stuff truly escapes me — who wants to hang out with the guys? I don’t even think guys want to hang out with other guys.

I don’t agree with Murphy’s assumption that this kind of stereotype represents a feminine ideal, however. I’ve never aspired to be a beer-swilling-cheeseburger-belching-guy’s-gal and the handful of women I have met that do are welcome to its limited charms (fart jokes) and suspect odours (actual farts). I’ll even buy them an order of curly fries in a gesture of good will. There’s only one catch: they have to eat every last one.

Does it irritate you when you see and read about how thin models and actresses “eat so much” in interviews? Tell us in the comment section below.