Season-15 winner Rachel Frederickson’s weight loss is raising questions about how much is too much. 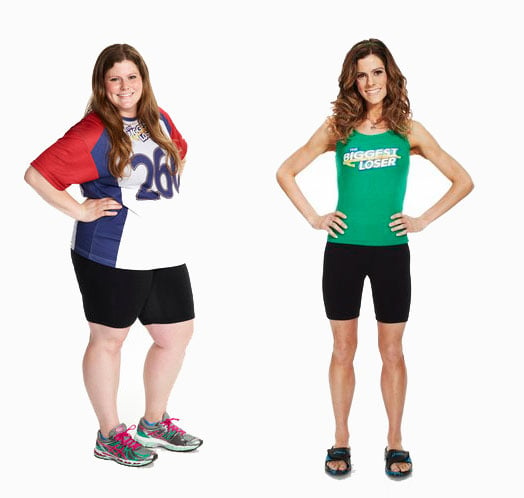 Rachel Frederickson before and after. (Photos, Trae Patton/NBC.)

Most of us want to shed a few pounds to look and feel better. But when does weight loss go from obvious success story to scary and unhealthy?

Debate about how much weight loss is too much, and whether or not our diet-obsessed culture contributes to unhealthy weight extremes, was recently kicked off by a contestant’s dramatic appearance on the finale of The Biggest Loser.

During the season finale contestant Rachel Frederickson won the coveted title and the $250,000 after shedding 155 pounds (going from 260 to 105, a 60 percent weight loss). Her victory, however, was overshadowed by her extremely thin appearance. Clad in a tank top and shorts, Frederickson appeared almost frail and skeletal.

Her appearance also seemed to surprise the series’ trainers Jillian Michaels and Bob Harper, both of whom looked taken aback by her dramatic transformation.

Later, on her Facebook page Michaels said she wasn’t “comfortable commenting on Rachel’s journey because [we] weren’t her trainers and weren’t given an opportunity to work with her at any point. Any questions about the contestants on the Biggest Loser should be directed to the show’s producers.”

“Biggest Loser is a journey which has its ups and downs,” wrote Quince on his Facebook page. “Please try not to look at one slice of Rachel’s journey and come to broad conclusions. Rachel’s health is and always has been my main concern and her journey to good health has not yet ended!”

While online commenters were quick to criticize Frederickson, experts argue that this kind of criticism doesn’t do Frederickson any favours but rather contributes to harmful behaviours.

“As a society we often criticize people for being at higher weights — that’s part of why we have the TV show The Biggest Loser — and then we feel free to criticize lower weight,” eating disorder expert Jillian Lampert told CTV News.

According to Lampert, it’s a better idea for people to focus on the factors that influence overall health rather than weight, which is just one factor. To Lampert that more comprehensive picture takes in things like a healthy diet, and getting sufficient exercise and rest.

In future seasons, it might make a nice twist for The Biggest Loser to incorporate these more subtle approaches rather than distill success down to a simple numbers game. Frederickson won the series finale fair and square by the laws of the game. Her appearance, however, suggests that it may be wise to encourage contestants to adopt a more complete vision of health and wellness.

Do you think the producers should’ve stepped in? Tell us in the comment section below.