Can a shake really help you lose weight?

Though some weight loss shakes may help you drop pounds, it's whether they're healthy you need to focus on. 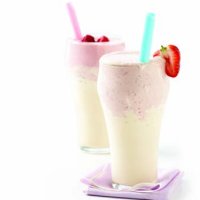 There is much ado in the media about the recent study of weight loss myths in the New England Journal of Medicine. One of the things in that report I’d like to hone in on is the use of meal replacement shakes.

The report named a number of myths, presumptions and “facts.” One of those supposed facts was “…use of meal-replacement products promote greater weight loss.”

My friend, obesity researcher Dr. Yoni Freedhoff commented on this saying that you need to sustain the same behaviours that lead to weight loss in order to sustain weight loss (which I agree with), and who wants to stay on meal replacements for life?

What’s more, an author for Forbes pointed out that a number of the study’s authors had strong financial ties to a meal replacement company. Can shakes make you lose weight? Well, yes they can, but there is a big caveat to go along with that. It doesn’t matter what brand you look at, no weight loss shakes possess any miracle ingredients to boost metabolism or transport fat to a parallel universe, or something. It is, more than anything else, a behaviour modification tool in order to control total caloric intake. And it’s one that I’m amazed anyone can ever stick to for any length of time. Here’s why: “Shakes for weight loss work by portion control,” Purdue University nutrition professor Richard Mattes told me. They create a set of rules. If you buy a “weight loss shake,” how it “works” is by getting you to follow certain rules to lower total daily caloric intake.

One popular weight loss shake used the line: “A shake for breakfast, a shake for lunch, then a sensible dinner.” One can of this shake has 220 calories, so breakfast and lunch total only 440 calories. If by some miracle you’re not starving at dinner time and can stick to that “sensible dinner,” then yes, these simple rules can allow for a calorie-restricted diet that will lead to weight loss. Again, the shake has no magic fat-burning properties. It’s not satiating and it sure isn’t as healthy as a balanced diet. I don’t think it’s sustainable either.

You may be able to stick to a plan like this for a while via white-knuckle starvation, but at some point your hunger will get the better of you, and then fast food drive-thru here you come.

“Protein in solid food is good, but in liquid form it doesn’t seem to retain its superiority in terms of being satiating,” Mattes told me. He explained when people are having trouble keeping weight on, like the elderly, they use protein shakes to get extra calories into them. There is a reason why professional bodybuilders use protein shakes – it’s to jam in the extra calories needed to build ridiculous amounts of muscle so they can look like some goalie-mask-wearing bad guy from Road Warrior. As a weight loss tool, it’s foolish. These things are meant for weight gain.

I’m going to lose Facebook friends over this. If you see people talking about how awesome a certain weight loss shake is, be it on Facebook or in person, just think multi-level marketing. People call themselves a “Coach” and flog shakes with scientific-sounding names. All those wonderful endorsements of how awesome these shakes are for weight loss by your friends? Yeah, they’re trying to sell them to you. Healthy eating, especially the kind that leads to weight loss, does not come in shake form.

Get your FREE metabolism “myth busting” report from James.