10 incredible food facts that will change the way you shop

Corn with as much sugar as a Snickers bar? The perfect time to eat a lime. Journalist Jo Robinson shows us a new way to buy and prepare our food. 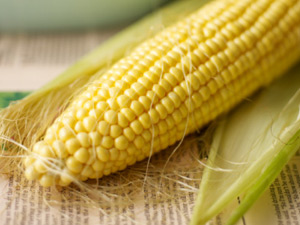 Did you know that shallots pack a higher phytonutrient punch than a regular onion? Or that Welch’s Concord grape juice is the most nutritious juice in the supermarket (yes, even more than pomegranate)? Well, Jo Robinson knew.

As the investigative journalist behind the astonishing new book Eating on the Wild Side: The Missing Link to Optimum Health, Robinson did what she does best — bring unique pieces of research about healthy eating together in a unique book that not only reveals the history of fruits and vegetables, but also tells readers how to get the most out of the healthy choices we do make.

Read on for more from Robinson and get 10 of the most fascinating facts from her new book (trust us, getting this list down to only 10 was very difficult).

Q: How did this book come to be?
A: Since high school I’ve been interested in the difference between wild foods, the wilderness experience and our modern environment. I’ve always also been interested in nutrition because I had a grandmother who was a food activist in 1910 and she was fighting against white bread and coca cola with a group of other women. So I grew up knowing that some food is just better for you than others.

Then 10 years ago I became interested in the Paleolithic diet — the diet we had before we were farmers — and I just asked my question: what is the difference in nutritional value between wild plants and the ones that we’ve made? I went to the research literature and began to see that the plants we ate were markedly more nutritious than what we’re eating now.

Q: How does this book differ from the others that also talk about eating locally?
A: What’s different is the new revelation that what really matters nutritionally is the genetics of a plant, not when it was created or how it was grown. There’s a term for plant varieties called cultivar and cultivar is more important than cultivation.

But in my research I was able to come up with 900 varieties of plants that are more nutritious and really tasty. That’s the good news — we haven’t bred it out of all plants. There are some out there that are just almost wild, as close to wild as we need to go and also conveniently available. But you need to know which ones they are because you can’t just look at them.

Q: Why do you think people have such a renewed interest in eating locally, farming and gardening?
A: There’s an awakening. It’s astounding the number of people who now shop in farmers’ markets.

It’s hard to understand why it’s happening now but I believe it’s an accumulation of events. The GMO controversy, the awareness of pesticides and how they’re in everything and more. And also so much of the food in supermarkets in particular just doesn’t taste good. It’s picture perfect, which is where the emphasis has been. But people are starting to boycott these stringy, mealy peaches that aren’t juicy, for example. For the first time, we’re saying in great numbers: it’s not good enough.

Q: How easily can we make changes to the way we eat?
A: I’m really addressing people who only shop at supermarkets as well as foodies. Because there are things you can buy in the supermarket and there are things you can do with them that make them five to 10 times better for you. And it doesn’t have to be things that are expensive, exotic and rare.

Q: What can we do to start changing the way we’re eating immediately?
A: Start with an ‘eat-me first’ list. Along with asparagus, it’s broccoli, kale, arugula, fresh greens, and spinach.

These are foods to buy in the supermarket or grocery store, pick the freshest varieties you can find and eat them that night or the next day. These plants burn up their antioxidants and sugar at a really rapid rate so you don’t want to have them sitting in your fridge for days. It also happens to be, interestingly, some of the most nutritious foods you can eat and people have been choosing these foods but not treating them right and not getting the benefits they thought they were getting.

But don’t buy a lot at once because you won’t be able to eat them all.

10 surprising food facts from Eating on the Wild Side:

1. Clear apple juice can contain as little as six percent of the phytonutrients of the original apple.

3. Eating some of the newest varieties of super-sweet corn can have the same impact on blood sugar as eating a Snickers candy bar.

4. Artichokes are one of the healthiest vegetables in the supermarket — even jarred hearts are nutritional powerhouses.

5. Most berries become richer in antioxidants the longer you cook them, making canned blueberries more nutritious than fresh.

7. Chopping or mincing garlic cloves and allowing them to sit for 10 minutes before cooking them activates the garlic’s allicin.

8. Ripe limes are yellow, not green. The darkest-green limes are hard and have the least juice.

9. If you cook potatoes and then chill them for about 24 hours, they are transformed from a high-glycemic into a low or moderate-glycemic vegetable.

10. Hunter gatherers who consumed calcium-rich wild greens had stronger bones than we do, even though they did not eat any dairy products.