Yesterday, I wasn't Carrie — I was number 1463. It was inked on my arm in black. Yesterday, I competed in my first ever triathlon. Put it all together: 1500 metre swim, 40 km bike ride, and 10 km run. Let's just say there were a lot of buff bodies at the race site. 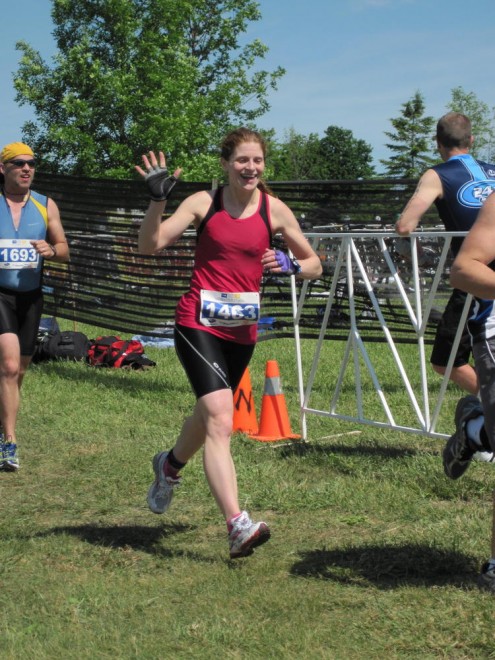 Yesterday, I competed in my first ever triathlon. Put it all together: 1500 metre swim, 40 km bike ride, and 10 km run. Let’s just say there were a lot of buff bodies at the race site.

While my husband juggled our children’s needs (Happy Father’s Day, honey!), I racked my bike in the transition zone (see — I’m learning the lingo), set up my gear on a colourful towel, and made friends with the woman next to me: also a newbie to the sport, she was coming from a competitive swimming background (yes, I was envious). She showed me the right way to get into my wetsuit (inside-out — who knew?), and zipped me up. Briefly bonded, we made our way down to the lake for a quick dip before the race began.

(I’ll skip the part where I lined up for the bathroom. Twice.)

When the starting horn blew, I was standing somewhere near the back, totally overwhelmed — not fearful, but simply in awe. The sight took my breath away. Imagine almost 500 competitors running into a beautiful Ontario lake all at the same time, arms churning and heads bobbing. I could not believe that I was among them. And then I ran and dove and churned and bobbed, too. Despite a detour toward the wrong buoy, the swim portion went as well as I imagined it could: yes, it was a slow swim, but I stayed calm and focused, and never once lost my breath.

Oddly, the run from the water up the hill to the transition zone was the hardest of the day. I was beyond thrilled — a year ago, I couldn’t swim three metres, and I’d just finished an open-water, 1500-metre swim! But I also felt utterly exhausted. I had to keep reminding myself that there was still a lot of race left.

Fortunately, cycling turned out to be my favourite part of the race. Within a few kilometres, I’d regained my breath, and the course flew by: peaceful country roads and lots of hills. Apparently, I have a weird affinity for hills — going up them — and as the race progressed, I felt stronger and stronger, as if I could have kept cycling pretty much forever. (My pelvis might have disagreed).

I was thankful to feel strong going into the run, because it can only be described in terms that make it sound like a form of torture: painful, gruelling, a test of will-power. Hopping off the bike and dashing 10 km does not come naturally to the human body. But the “brick” training runs paid off (short runs done immediately after a bike ride), and within a couple of kilometres I realized, Hey, legs, you’re back! Let’s pick up the pace here!

Still, no amount of training can make the last few kilometres of any race easy: they’re run on mental grit alone. Somehow, my legs kept on lifting even while my body was saying, “I can’t.” “Maybe you think you can’t,” I told myself, “but you’re still doing it.” With every step I took, I thought about all of the early mornings, and I thought about my children and my husband, and I thought about the friends who trained with me, and I could have kissed the race organizers for placing the finish line at the bottom of a long downhill stretch.

In a photo taken by friends near the finish line, both of my feet are off the ground.

(P.S. I’ll fill you in on the results, and on what comes next, in my final post on Thursday.)