How Worried Should Canadians Be About The B.1.1.7. Coronavirus Variant?

The variant, which tore through the U.K., is 30-50 per cent more transmissible. An expert on what happens if B.1.1.7. takes hold in Canada. 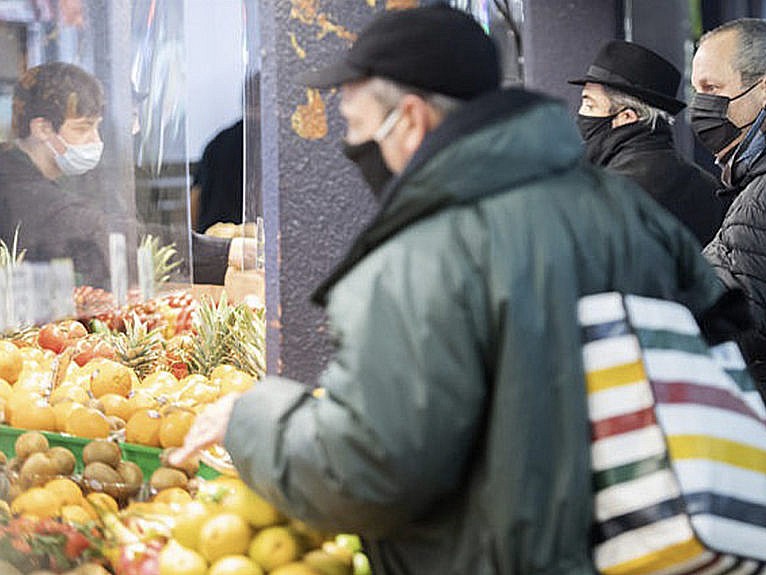 People wear face masks as they shop at a market in Montreal, Sunday, January 17, 2021. (Graham Hughes/CP)

On January 8, a single case of COVID-19 was detected at Roberta House, a long-term care home in Barrie, Ont. The disease ripped through the facility with such speed that by January 17, nearly half of the home’s residents (62) and about 40 per cent of workers (48) had COVID-19, and nine residents had died. Now, Ontario is testing to see if the highly contagious U.K. variant, B.1.1.7 played a part in how quickly COVID-19 spread in Roberta House.

Experts are increasingly concerned about what could happen if B.1.1.7. becomes the dominant variant of the virus in Canada. Modelling shows that Ontario could see its daily case count explode to 12,000 a day by early February if B.1.1.7 takes hold.

Maclean’s, Chatelaine’s sister publication, asked Dr. Robyn Lee, a genomic epidemiologist at the Dalla Lana School of Public Health at the University of Toronto to explain exactly what B.1.1.7 is, where it came from, and how it is being detected in Canada. Her emailed answers have been edited for space and clarity, and includes the links she provided.

What should Canadians know about B.1.1.7?

B.1.1.7 is a lineage of SARS-CoV-2 [the virus that causes the disease COVID-19] that was first described in the United Kingdom, which is doing large-scale genomic surveillance. This lineage was first detected in the U.K. in September 2020, and quickly became the main lineage circulating in England. Since then, it has been documented in over 50 countries, including Canada.

Evidence from the U.K. data suggests that B.1.1.7 is approximately 30-50 per cent more transmissible than other variants.

Genetic sequencing is used to detect cases of B.1.1.7. in Canada. How does that work?

When we are talking about sequencing for SARS-CoV-2, what we usually mean is “genome sequencing,” i.e., where we sequence all ~30,000 nucleotides of RNA that make up the entire virus. This means determining all of the A’s, U’s (for DNA, this would be a T), C’s, and G’s in the virus. Each time the virus copies itself, mistakes can happen—called mutations—such that the copy can be a little different from the original. These mutations can then continue on in other people when they are infected, and new mutations can then happen in those people, and so on. The more time that passes, the higher the number of mutations that can occur. In general, we see about two mutations per month with this virus.

Using genome sequencing, we can determine which mutations are present in each patient’s virus. By comparing the sequences between patient samples, in combination with epidemiological data, we can try and track when and where spread might have happened. However, it’s important to note that there are some limitations to what we can say with these data, depending on which samples were chosen for sequencing and why, what proportion of all positive samples we are actually able to sequence, and even who is actually being tested for the virus.

In addition to sequencing the whole genome, we can also just sequence specific parts of the genome, e.g., genes. For B.1.1.7., the gene that creates the spike protein is such a target. This is what is being done as a first step in some labs to try and determine if a patient might have the B.1.1.7 lineage; this is ideally being followed by whole genome sequencing to confirm this and allow for a higher resolution comparison to the other B.1.1.7 samples we’ve identified in Canada and globally.

How widespread or common is such sequencing of COVID samples in Canada?

Canada has been conducting viral genome sequencing through the Canadian COVID Genomics Network (CanCoGen), which was started in April 2020—though many public health labs and research labs had started sequencing to some extent prior to this. As of Dec. 22, more than 25,000 viral genomes have been sequenced as part of this (roughly five per cent of confirmed cases in Canada at that time.)

Some countries are doing more sequencing than we are in more of a “real-time” fashion; e.g., the U.K.’s sequencing network, with whom CanCOGen is partnered, has sequenced ~10 per cent of all their cases. Part of this relates to infrastructure and years of ongoing investment. The U.K. is one of the world leaders in using genome sequencing for public health surveillance, with capacity they have built over the course of the last decade for enteric pathogens and tuberculosis.

How much sequencing would Canada need to be doing in order to know how B.1.1.7 and other variants are spreading here?

This is difficult question. The higher our sequencing and analytic capacity, the more we will be able to detect B.1.1.7 and other variants are they arise. However, there are substantial challenges to increasing this in the middle of a pandemic. Investments need to be made to continue to build infrastructure, fund sequencing, hire skilled scientists who can lead and conduct analyses, and support those already working long hours on this, etc. It’s not as clear cut as just “sequencing more,” unfortunately.

Given that we have already had cases without travel history, this suggests B1.1.7 is already being spread in Canada. So far, it’s been reported in Ontario, Quebec, British Columbia, and Alberta, but we are very unlikely to be picking up all the cases that are out there at the moment. It seems likely to me that it’s only a matter of time before we detect it elsewhere in Canada, especially in regions without restrictions on interprovincial/territorial travel and where transmission is high.

How concerned are you about B.1.1.7 and how worried should the public be?

As an infectious disease and genomic epidemiologist, I am very concerned about B.1.1.7 and the risk of spread in Canada. We have evidence from multiple countries by now of how rapidly this lineage can take over—e.g. following the path of the U.K.; B.1.1.7 is now ~50 per cent of all cases in Ireland, and similar [data] is being seen following its introduction into Denmark.

As of Jan. 13 in Canada, 22 cases of B.1.1.7 had been detected. With the large number of cases we have daily in many provinces, unless we seriously curb transmission and vaccinate as many as possible as quickly as possible, I can easily see this becoming (even more) disastrous for us in Canada. We can’t afford to move slowly on these fronts. We should be learning from what we are seeing happen in other countries, and not waiting for it to happen to us as well.

Is there anything more the public can do to forestall its spread?

B.1.1.7 is more transmissible, i.e., it spreads more easily, but the way it spreads is the same. It’s still a respiratory virus that can spread through both droplets and aerosols. Wearing masks, maintaining distance from those outside our household, avoiding crowds and ideally not spending time indoors with those from outside our homes (acknowledging for many, this just is not possible because of work), continue to be important, even more so now. Focusing on improving ventilation—particularly in settings where this has been largely overlooked so far—is also critical to reduce spread.

Getting vaccinated will also be very important: to protect oneself from getting sick, but also potentially to help protect others; there is some limited data from the Moderna trial suggesting the vaccine may prevent asymptomatic infection and spread to others, however, this will need to be more fully evaluated as more people get vaccinated. Some other countries, such as Israel, have already vaccinated a large proportion of their population and are continuing to do so, [so] seeing how this impacts case numbers will be very helpful.

To measure how B.1.1.7 is spreading in Canada, what indicators are you going to keep an eye on in the next weeks and months?

Genomic surveillance is going to be critical to monitoring the spread of B.1.1.7 in Canada. It will also be important for assessing spread of other lineages as well. This includes those we already know about, such as B.1.351 which was first detected in South Africa and also appears to be more transmissible or P1, which was first reported this past week in Brazil, as well as new lineages that could develop as transmission continues to happen at high levels around the world.

A big concern, as we roll out vaccines across the country, is that we might start seeing escape mutants, i.e. viruses with mutations that allow it to evade the vaccine targets, reducing how well they work to protect us. With genomics, we can monitor for this – and then modify the targets of the vaccines to account for these changes.

Aside from this, monitoring case counts, but more importantly, hospitalizations, ICU use, and deaths, will be critical.