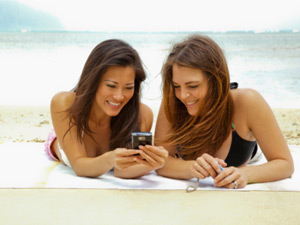 Researchers think that up to 40 percent of cancers are preventable by making lifestyle changes like quitting smoking, eating healthily, limiting alcohol intake and reducing sun exposure, as well as avoiding cancer-causing diseases like HPV and hepatitis. And scientists are looking into the potential effects of plastic, cooking and even cellphones. Find out how to cut your chances with these five tips:

1. Reuse carefully
If you threw out your water bottle after the BPA started making headlines, you understand that some plastics can have a negative effect on your health. But BPA isn’t the only plastic that’s dangerous. According to the David Suzuki Foundation, you should also avoid using plastic number six (check the little recyclable symbol to distinguish it). And plastics number one and seven are fine for single use, but shouldn’t be reused. Plastic three shouldn’t be reused or microwaved — which is unfortunate, since some plastic wraps are designed for this purpose. Which ones are in the clear? Reuse and eat from plastics two, four and five without worry.

2. Use the right sunscreen
So you already wear SPF 30 sunscreen when you’re out sunbathing (or every day, if you’re truly a good girl), but it’s vital to use the right type. SPF ratings were instigated when scientists thought UVB rays — the cause of sunburns — were the primary cause of skin cancer, but newer research has shown that UVA rays, which go deeper into your skin, also contribute to melanoma. So avoid UVA-based tanning beds, and be aware that if you’re using a high-UVB, low-UVA-blocking sunscreen, you could end up staying in the sun longer and actually getting more UVA exposure than if you used nothing at all. The answer? Avoid the sun or cover up, and use a broad-spectrum sunscreen that contains ingredients like zinc oxide, titanium dioxide or Parsol 1789.

3. Fry patiently
Frying foods at high temperatures releases fumes that the International Agency for Research on Cancer describes as “probably carcinogenic,” and using non-stick cookware on high heat might also release cancer-causing chemicals. Now new research from Norway has found that cooking on a gas stove produces more potentially harmful fumes than cooking at the same temperature on an electric range. (The worst combo they concocted? Margarine on a gas stove.) The researchers suggested whisking away your risk by using a fan that’s vented to the outside, running it on high and letting it run for 15 more minutes after you’re done. They say you can also simply reduce your frying time by searing your food in a pan, and then finishing in the oven.

4. Get some Ds
In addition to making us the butt of all too many igloo jokes, mounting research into Canadians’ chronic lack of vitamin D suggests that our cold-weather climate might be to blame for our higher-than-normal rates of cancer. During the summer, young women tend to get enough from just a few minutes of sunlight a day, but during the winter, the Canadian Cancer Society suggests taking a 1,000 IU supplement a day to reduce the risk of many cancers, including breast cancer.

5. Hang up the phone
The World Health Organization is currently studying whether cellphones increase the risk of certain types of cancer. Research so far has not shown a connection. If you’re concerned before the research is conclusive, you can use a headset instead of holding the phone to your ear. Your phone also emits more radiation when it’s having trouble finding a signal, so avoid using your phone if you’re cutting in and out. And since headsets still put out a bit of radiation, don’t wear them if you’re not talking.