7 of the best ALS challenge videos: From Tessa and Scott, to Bissonnette on a mountaintop. And don't forget Leo in Alberta. 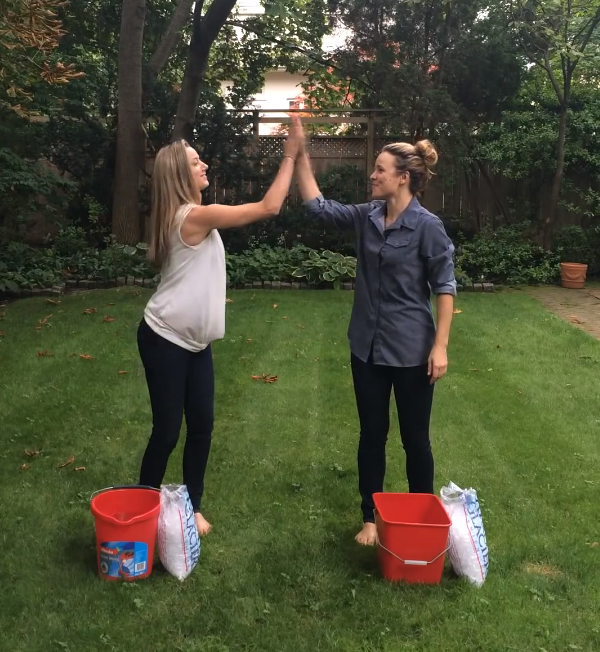 At this point you’ve either poured water over your own head for the ALS Ice Bucket Challenge, or you’ve been forwarded videos of others who have. Bill Gates, Oprah, and Matt Damon have done it. (Meanwhile, Stephen Harper, Barack Obama and Charlie Sheen have chosen to donate to the cause without getting wet.) We’re loving all the Canadian celebs who’ve played—and paid—along.  Here are our seven favourites:

1. NHLer Paul Bissonnette went all out with his video, getting a helicopter to pour glacial water on him atop a mountain peak in British Columbia.

2. Property Brothers hosts Jonathan and Drew Scott each poured a bucket over their heads—before one of them took a cheap shot.

3. Actresses Zoie Palmer and Rachel McAdams, nominated by ET Canada host Cheryl Hickey, each threw a bucket at each other, after promising to donate to the cause.

5. Cityline host Tracy Moore was nominated by chef Jason Parsons to take the challenge, which she eagerly accepted—and then continued hosting after the downpour.

6. Here’s an honourable-Canadian mention: Actor Leonardo DiCaprio took the challenge in northern Alberta, flanked by Chief Allan Adam of the Athabasca Chipewyan First Nation, Chief Steve Courtoreille of the Mikisew Cree First Nation, and Sierra Club President Michael Brun, while researching the oil sands for an upcoming environmental documentary. DiCaprio then nominated prime minister Stephen Harper, who tweeted he would only donate to the cause on Aug. 18.

7. And last but not least, Chatelaine‘s own editor-in-chief, Karine Ewart, and most of our art and digital teams took part in the cause. We donated the proceeds from our Beauty 100 sale to ALS Canada. (Thanks for the nomination, LouLou!)