Can meditation help you live longer?

Like me, you might be one of those cynics who cringes when the chime sounds at the end of another sweat-inducing yoga class to indicate that meditation time has begun. 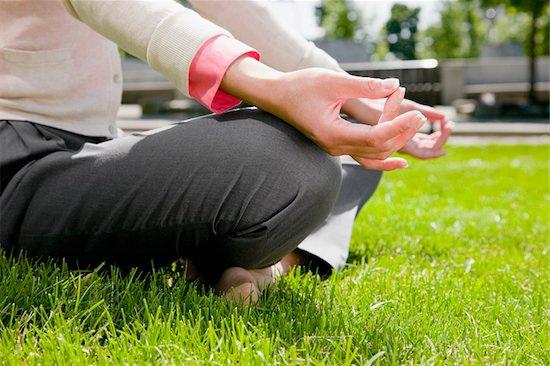 Like me, you might be one of those cynics who cringes when the chime sounds at the end of another sweat-inducing yoga class to indicate that meditation time has begun. Instead of clearing my mind and concentrating on my breathing, I’m usually thinking about how much longer I have to lie here, staring at the ceiling and working out if I have time to stop for frozen yogurt on my way home. But maybe I’ll start taking meditation a little bit more seriously now that it could help me live longer.

A recent story reported by Jo Marchant in the Guardian — “How meditation might ward off the effects of aging” — examines a new study from a U.S. Buddhist retreat that suggests that meditation can actually prolong life by preventing the degeneration of chromosomes. The Shambhala Mountain Center in northern Colorado encourages visitors to meditate for up to 10 hours a day, living a monk-like existence surrounded by images of the Buddha. Researchers wanted to know if meditation was benefiting those who practice, and if so how?

In addition to the expected mental health benefits — including improvements in perception and well being — researchers have determined that meditation can improve one’s physical health by protecting the telomeres on the ends of chromosomes and therefore delaying the aging process. Telomeres limit the lifespan of a cell, getting shorter every time a cell divides unless protected by an enzyme called telomerase. Marchant writes that people with shorter telomeres are at greater risk of heart disease, diabetes, obesity, depression and degenerative diseases such as osteoarthritis and osteoporosis, and they die younger.

The project at the Shambhala Center — the Shamatha project — found that meditators had significantly higher telomerase activity than a control group. Marchant writes: “Three factors in particular predicted higher telomerase activity at the end of the retreat: increased sense of control (over circumstances or daily life); increased sense of purpose in life; and lower neuroticism (being tense, moody and anxious). The more these improved, the greater the effect on the meditators’ telomerase.”

Marchant notes that small trials have already suggested that meditation creates more than spiritual calm. Meditative practices have been linked to lower blood pressure, the healing of psoriasis, and the boosting of immune response in cancer patients. One study found that mindfulness meditation was more effective than drug treatment in preventing a relapse of depression.

So how can you use meditation to help you live longer? There are many different kinds of meditation — from transcendental to mindfulness and compassion — and they can all benefit your health. Mindfulness meditation, in particular, is believed to help distance the individual from everyday stressors that can wear one down both physically and emotionally. And if you don’t think you have time to run off to a mountain retreat, consider “mini-meditation” sessions throughout the day, where you simply stop and focus on your breathing and awareness of your surroundings, pulling yourself into the moment. I, for one, prefer to do this on a park bench over a cup of frozen yogurt but you can do it anywhere, anytime.