Busting myths about aging and fitness 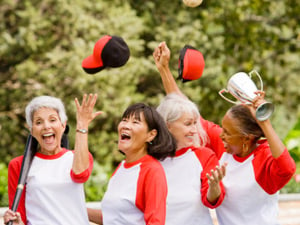 Today, many boomers are running marathons and pitting themselves against competitors half their age. But myths about aging and exercise continue to shape our notion of what we can and can’t do. Here, we look at five myths and separate fact from fiction.

Myth 1: Your body starts to deteriorate.

One of the most common myths abounding is that as you age you inevitably grow weaker. When studying people who kept training as they got older or began competing in middle age, researchers from the University of Pittsburgh found that you may be able to prevent this deterioration by staying active and that some physiological factors needed for good performance are not as affected by age as previously thought.

Myth 2: It’s too late to start training for a marathon.

Marathon running after 50 was once considered to be too hard on your joints. Recent findings from the University of Pittsburgh suggest that people can start training later in life – one man in this focus group took up running at 62. A year later he ran his first marathon in three hours and 25 minutes.

For some, it takes a milestone to make this transition. “Turning 50 makes you re-evaluate your life.There is a feeling that it’s your last chance to radically improve your health,” says Laurie Brown, the Toronto-based host of CBC Radio 2’s late-night music program The Signal, who recently joined JeansMarines, an organization that helps women run or walk a marathon.

Carol MacDonald, a 58-year-old personal trainer and wellness specialist from Midland, Ont., is training for the race that will enable her to qualify for her second Ironman marathon. Her training consists of two and a half hours of swimming, five to seven hours of biking and five hours of running per week.

Perhaps the biggest fear about embarking on a new exercise regime is injury. “I used to be afraid of slipping outside in the winter but now I just wear ice trackers,” says Brown, who now trains five days a week with three runs, yoga and pilates.

Taking breaks and listening to your body is paramount since you can over-train and become injured at any age. “Make a 10 percent increase per week. If you go too hard, too fast you’ll become prone to injury,” advises MacDonald.

According to experts it is possible to achieve results with hard work and support from a professional. “If you haven’t done anything in awhile then it’s a good idea to get a program developed for yourself,” says Colin Milner, CEO of the International Council on Active Aging.

But experts suggest approaching this search with caution. “It’s not a regulated industry so look for someone with an education in kinesiology or exercise science,” says Dr. Darren DeLorey, Assistant Professor at the Faculty of Physical Education and Recreation at University of Alberta.

Myth 5: Low-intensity exercise is better for people over 50.

If your idea of exercise is gardening or walking to pick up the mail, think again. “There’s a difference between physical activity and physical fitness,” says DeLorey. “There’s a threshold of intensity that is required and you need at least three hours of activity per week.”