'Botanical Sexism' Could Be Why Your Allergies Keep Getting Worse

Meet the 84-year-old Hamilton, Ont., man on a crusade to make schoolyards and parks a little less sexist— and a lot more allergy-friendly. 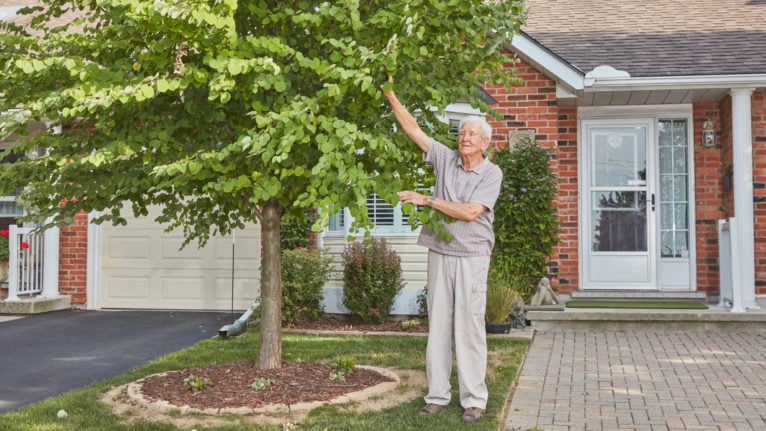 Peter Prakke in front of a Katsura tree outside of his home in Ancaster (Photo: by Carmen Cheung)

In front of Peter Prakke’s condo townhome in Hamilton, Ont., is a katsura tree. To the untrained eye, its beautiful rounded leaves are innocuous. To Prakke, the male katsura is a demonstrable—if lower-level—allergenic offender. There are worse trees out there for pollen production, but there are also many better ones.

While not an allergy sufferer himself, the 84-year-old Prakke, a retired horticulturist, is an outspoken and passionate crusader for allergy-free gardening and against “botanical sexism”—a term used to describe the widespread use of male trees and plants in urban landscaping.

It was coined by California horticulturist and allergy expert Thomas Ogren, author of The Allergy-Fighting Garden, who, on his quest to understand his wife’s allergies, discovered that nearly all the trees in his neighbourhood were dioecious (meaning single-sexed) and of the male variety, spewing their pollen everywhere. Female trees don’t produce pollen but do create fruits and seeds, which then drop to the ground. Viewing this output as litter, urban planners avoided the females. “They’ve really gone hog-wild in most of the Canadian cities with that,” says Ogren, who did a cross-Canada allergy audit for the drug Reactine back in 2012, and found that 80 to 85 per cent of urban trees in the country were male.

Ogren and Prakke met about 15 years ago, which is how the Ontarian learned about botanical sexism, and the two became united in cause. “Together we really try to spread the word,” says Prakke, who brought the idea north and has been trying ever since to reverse the damage in whatever ways he can, including by authoring his own book, Veterans Gardening Guide: Promoting Allergy-Friendly Planting. Still, though studies show allergy season is lasting longer and sufferers’ symptoms are getting worse by the year, getting people to take the consequences of botanical sexism seriously has proven no easy task.

More than sending out pollen, the over-abundance of male trees in cities could be contributing to larger problems exacerbating allergies. Climate change has led to an earlier and longer pollen season, while the long-term increase of CO2 released into the air is thought to be fuelling the problem. “That CO2 is a stimulus for those plants and trees to produce more pollen and to increase the allergenicity of the pollen as well,” says epidemiologist and Health Canada researcher Éric Lavigne, who’s studying tree canopies in cities like Toronto, Montreal and Vancouver, and how they impact human health. Ogren adds that pollutants attach to airborne pollen grains and cause them to split, fragmenting pollen into tinier particles that penetrate people’s respiratory systems more deeply and contribute to health problems like asthma. It’s a serious and timely issue according to Prakke, with evidence mounting that COVID-19 has disastrous effects on weakened lungs: “If you’re already an asthmatic person, whoa, that’s a double whammy.”

Prakke succeeded in getting Hamilton’s Catholic and public school boards to consider the allergy factor of plants in schoolyard landscaping and to use the Ogren Plant Allergy Scale (OPALS), a system the Californian created to rate the pollen-producing capacity of plants. That came after Prakke helped put together an Ontario private member’s bill in 2016 urging the same approach province-wide, though the law never passed. He’s also founded the concept of “Bravery Parks,” green spaces that honour veterans while preferably using allergy-friendly landscaping. The first completely allergy-free one is set to open in Orangeville, Ont., this fall.

Still, Prakke has encountered roadblocks. What the average buyer wants is an aesthetically pleasing and low-maintenance tree, says Dan Clost, who has years of nursery experience and teaches horticulture at Loyalist College in Belleville, Ont. Often, that means male or monoecious plants (which have both male and female flowers), so that’s what retailers keep in stock. Most people don’t know the effects of male trees on allergies; even if they inquired, few retailers have adopted OPALS, so workers may be hard-pressed to make accurate suggestions. In short, inequality between the botanical sexes—as with humans—is a systemic problem.

Hamilton’s school boards may have changed their ways, but for the municipality, the messy by-products of female plants remain one of many considerations when planting trees in urban settings. The problem with pesky fallen fruit or seeds of female trees—like, say, the pods of Kentucky coffeetrees—is more than a matter of cleanup resources. Sam Scarlett, Hamilton’s manager of forestry and horticulture, says the city must also factor in the risks and liabilities of citizens slipping or tripping on the fallen material, or the impediments posed to people in wheelchairs.

While he says staff do take allergies into account, they’re typically more focused on eco-diversity as well as the hardiness of trees, because conditions in cities can be tough to survive. Most of the trees on their street-planting list are monoecious, he adds, which are at least better for allergies than solely male varieties. Only a couple of the tree species on his planting list are mandated to be male-only (the city avoids female ginkgos, for example, due to the vomit-like odour of their fruit). And the city does take placement into consideration; a heavy pollen-producing conifer may be planted away from city streets, in a secluded area like a cemetery.

Scarlett says out of the thousands of citizen complaints he fields, few are about pollen, apart from a handful during allergy season. He’s heard from Prakke, of course, who continues to inch forward in the mission he shares with Ogren. While the retiree has helped make his condo community more allergy-friendly, he acknowledges that for the most part, “people don’t give a hoot.” Still, Prakke says, “you just keep on fighting.”