Boost your iron with a gingerbread smoothie

Shortly after turning 11 years old, I developed an eating disorder that I would struggle with for over 10 years. Some of my unhealthy behaviours included self-starvation, binge eating, and over-exercising. 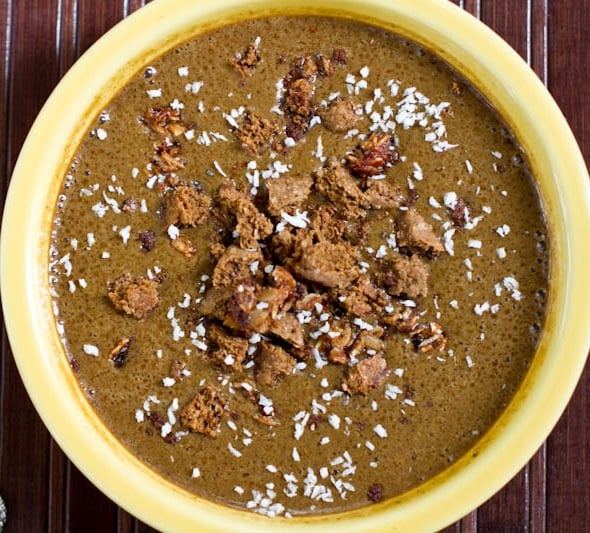 Shortly after turning 11, I developed an eating disorder that I would struggle with for over 10 years. Some of my unhealthy behaviours included self-starvation, binge eating, and over-exercising. When my body couldn’t take the starvation any longer, I binged on anything I could get my hands on: cookies, candy, chips, chocolate bars, or even cake mix batter until I felt physically ill. I was trapped in this up and down cycle for a long time.

Aside from being miserable, I also suffered from vitamin deficiencies, including low iron levels. Deep down I was concerned that I was harming my body, but it was difficult to believe that I could change. I also felt being a certain size or weight was much more important than being healthy.

Slowly but surely I turned a new page in my life – I decided to seek help and put myself first. With the help of a therapist, I renewed my focus on my health and well-being, and decreased my focus on my weight as well as addressed issues from my past. I took all that negative energy and flipped it into something positive. Instead of focusing on my perceived “flaws”, I focused on things I was grateful for in my life.

These days I don’t care much about calories or fat grams, but I do care about eating quality food and getting proper nutrients. I also don’t expect every day to be the picture of “perfect” health, but I do strive for an overall balance and concentrate on the big picture.

I’m also a lot happier than I used to be. And those vitamin levels? Right where they should be.

As women, we’re about twice as likely to suffer from iron deficiency as compared to men. If you are a vegetarian or vegan, you’re even more likely to suffer from an iron deficiency at some point in your life, especially because plant-based sources of iron are more difficult to absorb than animal-based sources. This gingerbread smoothie is packed with blackstrap molasses, which is a wonderful vegan source of iron. One tablespoon has 3.5 mg of iron and I like to sneak in two tablespoons into this smoothie. Add in some chia seeds and you will up your iron even more. Consume this smoothie with vitamin C (such as a piece of citrus fruit) to help increase the iron’s absorption.

Directions:
1. Place all ingredients, except the molasses, into a high-speed blender and blend until smooth.
2. Now add the molasses, a bit at a time, to taste. You may find that you only want 1 tbsp of molasses or maybe 2 tbsps if you like the flavour as much as I do.

Angela Liddon is the creator of Oh She Glows — an inspiring, healthy vegan recipe website — and one of Chatelaine‘s Women of the Year 2011. Angela’s passion for healthy vegan food is contagious and she’s eager to show others that vegan (and often gluten-free) food can blow your taste buds away.