There's a 50/50 chance you or a family member will need blood at some point in your lifetime, yet 35 per cent of Canadians flat out refuse to ever roll up their sleeves. In honour of World Blood Donor Day, coming up on June 14, here are a few motivators. Plus,find out where to go to get out more info on how to donate 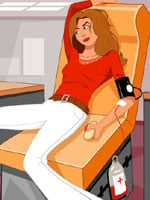 If you assumed there were plenty of blood donors in Canada, you’re not alone. Canadians think that 26 per cent of the country donates blood, but in reality, only four per cent of those eligible actually do.
You carry around an average of five litres (20 cups) of blood. You give away only about 450 millilitres (one pint) during a donation
Your body replaces the plasma portion of the blood that’s removed within hours, the platelet portion within a few days and the red blood cells in about 56 days. After that, you can do it all over again.
There may be a correlation between giving blood and a lower risk of heart disease, according to a study conducted at the Kansas University College of Medicine in 2002.
Needle phobia is an under-researched condition. However, a study in the Journal of Anxiety Disorders in February 2006 revealed that only a small number of patients actually experienced anxiety during the needle insertion. Fainting was extremely rare. In other words, the fear is far worse than the poke.
Canada has a proud history of braving the needle. During the Second World War, we donated more blood per capita than any other Allied nation (more than 2.5 million bottles) to help wounded soldiers on the battlefields of Europe and North Africa.
Donating is easy. To be eligible, you must be between 17 and 61 (for first-time donors, regular donors can continue until they are 71) and in general good health. At the clinic, you will be asked a series of questions to determine further eligibility. For more information and to locate a clinic near you, visit Canadian Blood Services or call 1 888 2 DONATE (1 888 236 6283).
FILED UNDER: blood