Can A Weighted Blanket *Really* Help You Sleep Better?

We put the buzzy sleep aid through a rigorous test. 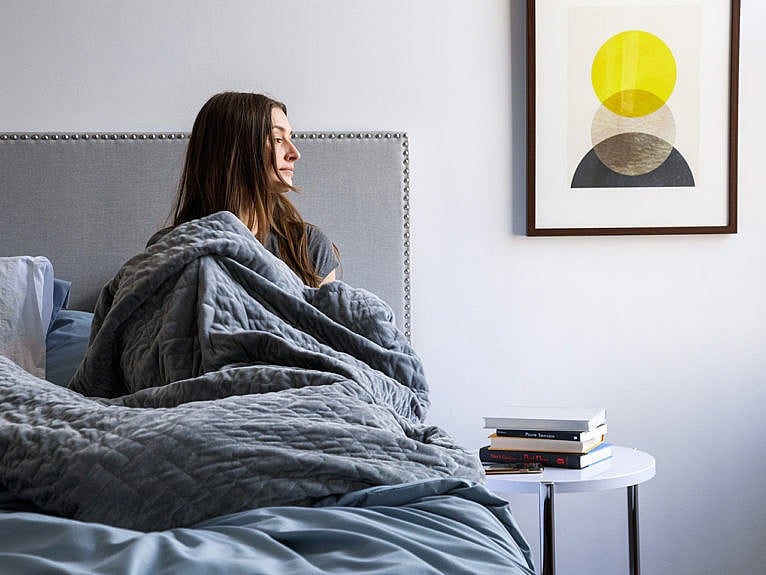 I’m curled up on the couch trying to get my cat to lie on top of me. It’s one of probably a million nights in my life thus far that I can’t sleep—sometimes I get as little as one hour, a horror I’ve scientifically rated with a “Truly Shitty” rating, as opposed to an “OK” score (i.e., the practically luxurious three-to-five hours zone). Sometimes a heavy, warm body pinning me to the bed in a spooning/unconscious wrestling configuration helps, but the problem is, none of the human bodies in my home are interested. My husband and I don’t share a bedroom—he snores, I murder him. I toss and turn, he murders me. We decided long ago on less murder and more separate rooms. I used to crawl into bed with my kid until he started complaining that I was waking him. So now the only option left is the highly unreliable cat, who maintains evil eye contact as she saunters over and immediately starts clawing at the couch with a disdain that borders on violence. Not relaxing.

It’s time to buy a body. One that will give me nice, heavy hugs whenever I want, and one that’s so trendy it’s one of the biggest sleep wellness crazes since foam mattresses in cute boxes. I’m going to get a weighted blanket.

Weighted blankets have been used for decades for therapeutic purposes, particularly for calming kids with autism spectrum disorders. Over the last couple of years they’ve made the leap into the lifestyle zone—something you can buy at bookstores, along with satin sleep masks and scented candles. The general consensus among advocates is that a weighted blanket should be about 10-15 percent of your body weight, to create a sensation of “deep touch pressure.” Some of the popular brands in Canada include Hippo Hug, DreamHug and Gravid. Brands like Indigo, Endy and Casper are also getting in on the action. The main differences between them seem to be what they’re weighted with (plastic pellets or glass beads) and whether they’re made by hand or in a factory. I go with one from the company Gravity because I’m lazy (what? I’m tired!) and they’re available at Indigo. They’re the hip choice because they launched on Kickstarter and are popular in Brooklyn, doncha’ know. The $279 blanket comes in 15-, 20- and 25-pound versions. I go for the 15 pounder in “space grey.” (The only other colour is a deep blue—clearly this millennial brand didn’t get the dusty-pink memo.)

When it arrives, my eight-year-old son immediately wants to try it.

Hellll no. This is Mommy’s blanky!

It’s smaller than I expect—like a decorative throw for a double bed as opposed to a full duvet. It’s designed for one person, because there’s nothing less calming than fighting your bed partner for your therapeutic blanket. It has a removable and washable velvety grey cover with gridded stitching that keeps the micro beads inside uniformly distributed. While there haven’t been independent studies on the use of these blankets for insomnia, deep touch pressure is said to replicate the feeling of being held, increasing serotonin and melatonin (the happy and chill-out hormones, respectively) and decreasing the production of stress-y cortisol.

My first night with my new friend happily coincides with brutally plunging temperatures, which is the perfect time to get an extra layer for your bed. I have a torn tendon in one of my arms, so while the blanket isn’t super heavy, it’s hefty enough that I have to be careful to move it with both hands or it hurts my injured arm. I settle in. It feels nice…comforting. Ever had an X-ray and kind of liked that weird weighted pad they put on you? It’s like that, just fluffier. It’s like a friendly panini press for humans. I dig it.

I also find it has other uses. One night I’m crying like a 16-year-old girl who’s just gotten dumped for the first time over something that isn’t that big of a deal, but I’m upset and wound up. My husband tries to cuddle me into submission—but I suddenly realize it’s not him I actually need at that moment. I want my special blanket.

Does my weighted blanket radically change my life? No, but my sleep difficulties are so entrenched that I doubt any one product—unless that product was a concrete slab that knocked me unconscious—could change that. My overall snoozing hours through my first week of trendy blanket ownership range from a couple of “Bad” nights (three to four hours) to a sprinkling of “OK” (five to six) to at least one miracle “Good” (seven to eight). I don’t, however, have a “Truly Shitty” night, so that’s definitely something. I also feel like I sleep more deeply, which could be due to the fact that it’s harder to move around, or could be the magic “pressure points” the blanket supposedly stimulates.

The best part? Eevee really has taken a shine to it, and now she lies on top of me each and every night.