What I Wish I’d Known Before Tapering Off My Antidepressant

A stopgap measure morphed into a life-dimming experience. Here’s what tapering under medical guidance looked like for me. 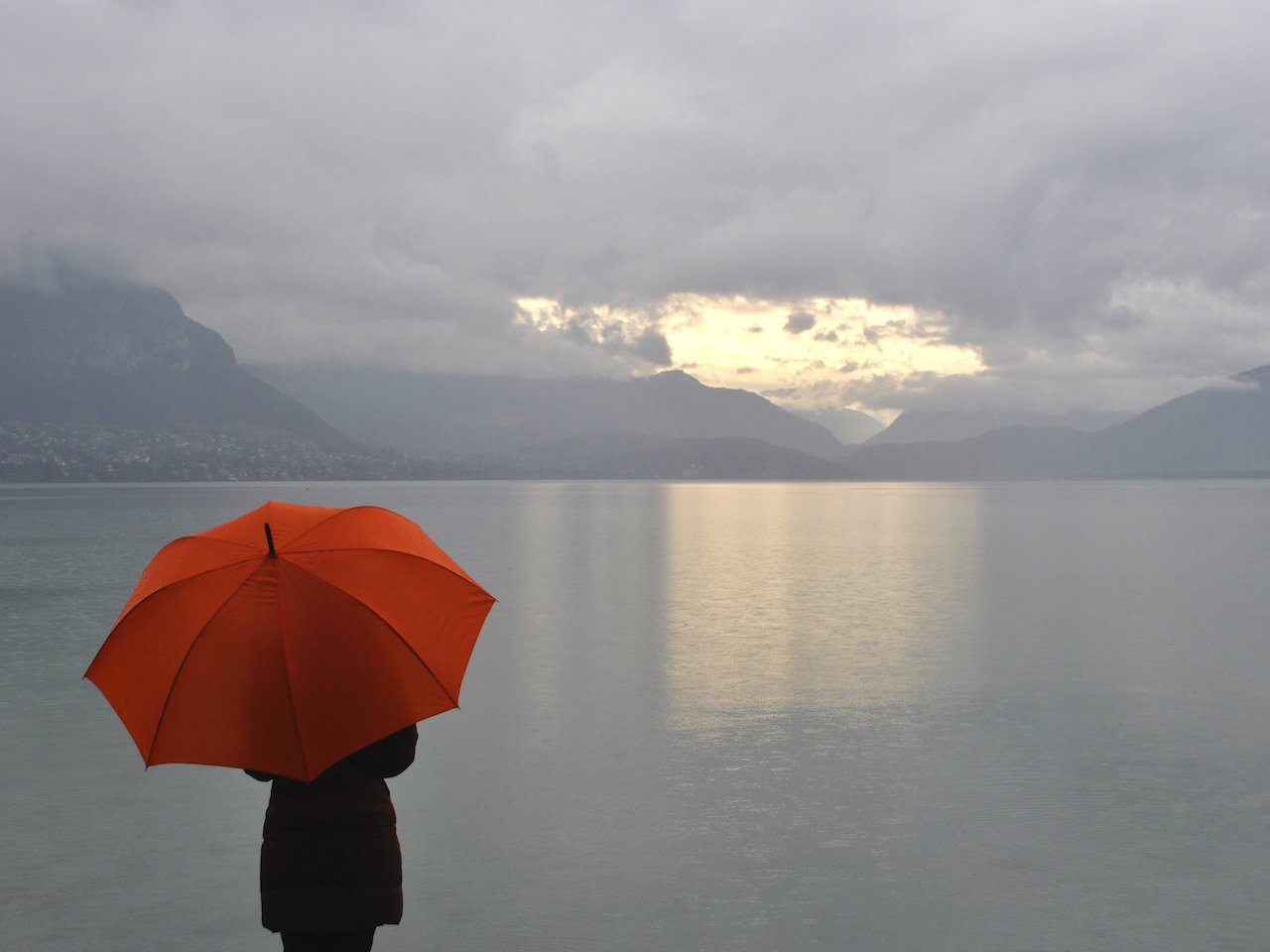 Going off medication because you feel better, says author Glennon Doyle, is like “standing in a torrential rainstorm holding a trusty umbrella that is keeping you toasty and dry, and thinking ‘Wow, I’m so dry, time to get rid of this silly umbrella.’” Sure, you may stay dry. But if you remain under the umbrella long after the skies have cleared, you may never feel the sun’s warmth.

I had not felt that warmth in years.

The storm clouds first appeared when my baby was not yet a year old. I spent most days pushing him around in a stroller, sobbing behind my sunglasses. For months, I waited for those ominous clouds to shift, and when they did not, I made an appointment. I explained to my doctor about the clouds—how they had appeared when I was in university, and now they were back. She prescribed an antidepressant, an SSRI called Celexa, and told me to enjoy my new baby.

Slowly but surely the clouds broke up. My baby grew into a toddler and, eventually, a preteen. My doctor kept refilling my prescription. Every morning, without hesitation, I took the little white pill. Since I had taken antidepressants once before, there was no discussion about side effects. My GP and I never talked about when I should come off the meds, or what I should do if they stopped working (the unfortunately dubbed “poop-out effect”), and I never asked. Instead, I deferred to my doctor’s professional judgment and trusted her implicitly. I was, after all, vulnerable and depressed.

I was also far from alone. According to the Centre for Addiction and Mental Health, by the time most Canadians turn 40, half of us have—or have had—a mental illness such as depression or anxiety. Rates are highest among women aged between 15 to 24, and women are three to four times more likely to attempt suicide than men. I have been that stat. A poster girl for melancholy. In the wake of COVID-related isolation, stress, and trauma, experts predict an epidemic of clinical depression. People who’ve never experienced depression may find themselves in its chokehold and will turn to their doctor for a solution. In many cases, that ‘solution’ will be an antidepressant.

Treatment for depression typically involves pharmacotherapy (drugs) and/or some form of therapy, such as cognitive behaviour therapy, interpersonal therapy, light therapy, or electroconvulsive therapy. According to an article in The Canadian Journal of Psychiatry, only half of Canadians experiencing a major depressive episode receive “minimally adequate care.” While medication is often necessary, the current system for treating mental illness is flawed—particularly for people of colour who face cultural stigma and additional barriers, like finding a therapist of colour familiar with their lived experience. Although I saw a therapist during university, during my postpartum depression, it was not a viable option. Long waitlists are woefully common, and when you’re depressed, you can’t afford to wait six months to a year for help. And at approximately $125 to $175 per session, the cost of therapy in Canada can be prohibitive and is rarely fully covered—even if you are lucky to have private insurance. This is something that needs to change, says Dr. Deanne Simms, clinical director of the Ontario Structured Psychotherapy Program at the Canadian Mental Health Association for York and South Simcoe. “Private providers are encouraged to offer services pro bono or on a sliding scale to those who would otherwise not be able to access them,” says Dr. Simms. “In the public sphere, we are seeing a concerted effort to offer Internet-delivered treatment or remote coaching via phone. Services are also being made available in primary care settings to ensure that people’s mental health care needs are being met at the same time as their physical needs.”

After my postpartum storm had passed, I figured I would simply taper off Celexa like I had in university, and revert to my former self. I figured wrong. What was initially a stopgap grew into what felt like dependency. Although the World Health Organization recommends that patients remain on antidepressants “at least nine to 12 months after recovery,” there are no firm guidelines on when to discontinue medication. That’s because drug treatment is highly individualized, based on a combination of medical history, personal preference and tolerability. For those with a history of depression, says Dr. Georgina Zahirney, president of the Canadian Psychiatric Association, it is often a matter of “weighing the risk of another depressive episode against the burden of a medication’s side effects.”

Since depression tends to be a recurrent illness, some people choose to take antidepressants indefinitely rather than risk a relapse. In other words, some people stay under the umbrella forever.

Initially, Celexa was a magic bullet. It worked wonders for me—until it didn’t. Sexual dysfunction, weight gain, sleep disturbance, emotional bluntness and suicidality were symptoms I experienced the longer I stayed on my SSRI. (Side effects, I later learned, can become more severe when an antidepressant is taken for more than three consecutive years.)

Ultimately, Celexa turned me into a shadow of my former self. I was no longer sad, but I wasn’t exactly happy, either. My doctor went on to have babies of her own, and given my history of depression, my new doctor was wary of my decision to taper. But rather than switch to a different antidepressant, I was determined—under my doctor’s guidance—to give my body a break. The schedule for tapering largely depends on the dose, duration and medication. “Some antidepressants are more difficult [to come off],” says Dr. Zahirney. “If you are on the minimum dose, and it’s a first depressive episode, you can usually halve the dose in two weeks and taper completely by four weeks once you have taken the medication for an adequate amount of time to treat the depression. This should be done after consultation with a clinician.” Because I had been on Celexa for several years, I had to take it slow and reduce my dose incrementally over several months.

Stopping antidepressants too abruptly can cause discontinuation syndrome, so Dr. Simms stresses the importance of tapering under medical guidance. “If you notice physical symptoms, such as tremors, hallucinations, confusion, dizziness, or shortness of breath, you should check in with your prescriber.”

While I didn’t experience those symptoms, nothing prepared me for how hard tapering would be, especially during the COVID-19 lockdown. I couldn’t visit or hug my friends or extended family. I couldn’t pop into a store or check out a gallery to get out of my own head for a while. The silver lining: Any stigma I may have felt about my depression had gone. The pandemic has created what Dr. Simms refers to as a normalizing effect. “It has opened people’s eyes to what some of the population has been experiencing for a while. A lot of us are struggling with fatigue, restlessness, irritability and low mood. People are now more likely to talk about it.”

I had started tapering before COVID-19 hit, and though I was sometimes tempted to reach for a little white pill, I did not. Before long, the black clouds rolled in, blocking out any trace of light. With my husband’s support, I persisted. He weathered my moods (think PMS on steroids) and grabbed me off the ledge more times than I can count. For days, I cycled between mania and rage. There were nights when I barely slept: my mind raced, my restless legs jumped, invisible bugs crawled all over my body. Every day I ran as if to outrun the clouds. I meditated and cried. I texted only my closest friends. I screamed at my husband and son then cried out of guilt and shame. Gradually, almost imperceptibly, the balance shifted; I cried less and smiled more. I started online therapy. Cracks of light seeped through the cloud cover. The storm may come again, so I remain vigilant of any distinctive changes in sleep, mood or appetite that signal a relapse may be on the horizon. At the first sign of something brewing, I will not hesitate to get help. For now, though, the skies are calm and clear.

When I took my last pill a few months ago, I raised a glass to the woman I used to be. I have a hard time remembering what she’s like, but I look forward to getting to know her again. It’s been a long time.