Am I making you uncomfortable?

A recent article over at Slate.com — "I Don't Need a Hug" by Janet Lapidos — highlights the laments of those who have no affection for the casual hug. 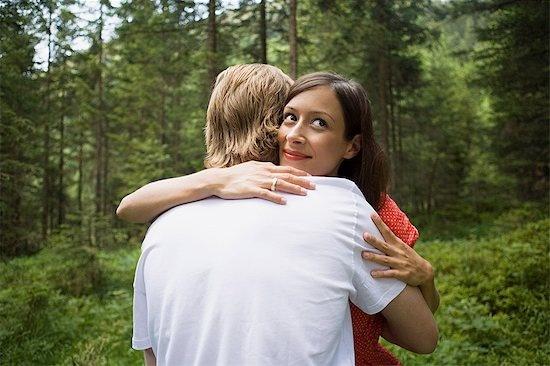 A recent article over at Slate.com — “I Don’t Need a Hug” by Janet Lapidos — highlights the laments of those who have no affection for the casual hug. To quote the author: “Granted, with the right person, I enjoy a well-placed hug. The right persons include: blood relations, my boyfriend, and close friends. By ‘well-placed’ I mean before or after a lengthy separation, as a form of congratulation (you’re getting married!), as a means of consolation (you’re getting divorced?), or to ward off hypothermia. That’s about it (though I should specify that I waive the category requirements for my boyfriend)…So why is it that when I go over to your house for dinner, you wrap your arms around me, even though I saw you last Friday at the movies? And why do you come at me again after the meal is over, even though we hugged not three hours ago and I’ll probably see you next week at that party? It’s not that I don’t like you — I do — but it’s such an awkward interaction.”

This article struck a real chord for me. I’ll admit it: My name is Sarah and I’m a hugaholic. I’ve always been physically affectionate and I love to hug friends and acquaintances upon both arrival and departure. In my mind, it opens and seals a social transaction, and it demonstrates how happy I am/was to see someone.

Thinking back now, I can recognize some key signs of discomfort from non-huggers. For example, refusing to get out of booth seating in restaurants and bars in order to say goodbye at a safe distance. Quickly extending a hand in a bid for a more formal adieu. Of course, that wouldn’t stop me from stretching my arms out over a table or lunging past a handshake. But even when I did win the hug, I could still feel something cold in the exchange; their arms said “hug” but the rest of their body said “Why are you touching me?”

But here’s the thing: hugging makes me happy. (Actually, I really prefer a kiss on the cheek — ideally, both — but that social protocol is rarely followed this side of the Atlantic, and my attempts at garnering this kind of greeting or farewell have all too often ended in a somewhat awkward near-smooch on the lips.) Anyhow, it’s weird to think about how some of the things that make us happy can make other people feel lousy. For example, I am not a shower singer but have been known to belt out some choice tunes while washing dishes. I can’t imagine that former roommates have been made particularly happy by that little ray of sunshine in my daily life.

So what’s the answer? A farewell to (overly familiar) arms? I guess I’ll just try to be more selective — or at least more clued into the physical cues being offered by my intended targets. And if I start to feel starved for affection, I can always take out a Craigslist ad. (Wanted: Hugs and double kisses; no funny business.)