From less than a year to more than 35, husbands and wives share what keeps them going strong 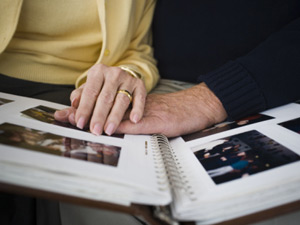 What makes a happy marriage? We spoke to six married couples at different stages to find out what their biggest expectations were after the wedding, how they solve arguments and how they keep romance alive.

What do you remember most about your wedding day?
Beth: I will always remember how Loris was so eager that he said ‘I do!’ not once but twice before he was supposed to (so he actually said it three times!). It was hilarious, everyone laughed, but it was also so adorable.
Loris: How beautiful my wife was, and how I didn’t say anything really silly.
– Beth and Loris, married three years, one child

Adrienne: Walking down the aisle and seeing Jeff with this wonderful smile on his face. It felt so right.
Jeff: Strange as it may seem, it’s the little things that didn’t actually impact the wedding. For instance, the fact that it rained most of the day, that I was able to play soccer in my tuxedo with the best man in the church basement just prior to the service and spending a lot of time smiling.
– Adrienne and Jeff, married 13 years, one child

What surprised you the most the first year?
We were surprised that we felt a post-wedding low, after all of the hype and busy-ness was over.
– Elizabeth and Aaron, married two months

Beth: I found that getting engaged and buying a house together (and renovating – ugh) were the biggest steps. After that, being officially married wasn’t a dramatic change. It’s just like being engaged – except better, because we don’t have wedding-planning stress.

Adrienne: I was surprised how easy it was to transition to married life.
Jeff: Nothing really surprised me in the first year. Yet, for those couples that don’t live together prior to marriage (like us), the first year involves a lot of getting to know the other person at a whole new level.

Ferne: That he didn’t know how to fix things around the house.
– Ferne and Mel, married 35 years, two children

Denise: How many meals there are to cook and dishes there are to clean each day.
Roland: Nothing because I lived with my spouse prior to marriage.
– Denise and Roland, married one year

Lisa: I didn’t know then what an incredible father he would be. He did a seven-month paternity leave with my son and has been my partner in parenting every step of the way. He has also been incredibly supportive at times when my career was exceptionally demanding.
– Lisa and Jeff, married nine years, two children

How do you solve disagreements?
Charlotte: We both used to sulk, then one would give in and we would talk out concerns. As we’ve grown in this marriage, we’re now more vocal about certain issues. No more sulking.

We solve disagreements by talking. We have promised to be truthful with each other.
– Elizabeth and Aaron

Denise: We talk them through until they’re settled. And we try to bring things up long before they turn into disagreements.
Roland: [We] speak to the issue and listen to the other person’s point of view and try to walk in their shoes to get a better understanding of where they’re coming from.

Adrienne: We don’t have many – but when we do, we try to listen to the other person and talk through the issue. I can get a bit excitable and Jeff is more low-key when it comes to disagreements. We sort of even each other out.
Jeff: With a bare knuckle brawl. Honestly, we don’t have many disagreements, and when we do, we talk it out. Of course, it takes a while to get her to admit to a problem.

What do you do to be romantic?
Denise: I surprise him with little gifts and I tell him all the time how great he is and how happy I am to be with him.
Roland: Make up songs, write love notes, express my love all the time.

Beth: Right now, with a small baby… cuddling on the couch after she finally goes to sleep is pretty nice. Definitely different romantic standards than pre-baby!
Loris: I bring her flowers… occasionally…

It’s hard to find time to be romantic with young kids but we try! Sometimes I send him cookies to his office. We kiss after every movie. We go out on date nights every few weeks or so and we usually take one week a year where we keep the kids in daycare and spend the week sleeping in, going to nice restaurants for lunch, matinee movies, art galleries and sometimes even Canada’s Wonderland.
– Lisa and Jeff

Friday nights at the movies or at a neighbourhood bistro every two weeks.
– Charlotte and Mike, married 28 years, three children

What’s your best advice for newlyweds?
Ferne: That men and women really are different.

Charlotte: Take one day at a time.

Adrienne: Laugh with each other (everyday, if possible). Also, don’t sweat the small stuff – if every toilet seat up or toothpaste tube squeezed the “wrong” way, sets you off, you’re going to have a hard time making it through any of the bigger challenges that life can send your way.
Jeff: Listen to each other, accept the small differences and don’t take yourself too seriously.