Yesterday was a blah day for me. Sporadic rain never puts me in a yippee mood and I also woke with a head rattling headache. 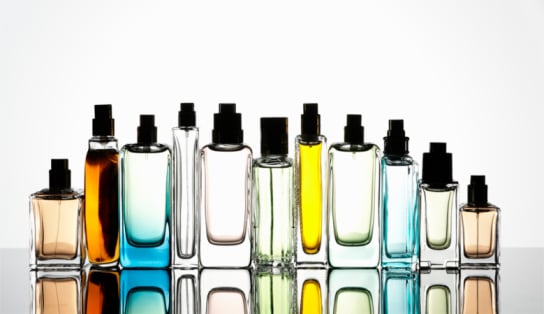 The other day was a blah one for me. Sporadic rain never puts me in a yippee mood and I also woke with a head rattling headache. While I could function, I needed a pick me up (besides the two extra strength Tylenol I was swallowing religiously every four hours).

So I turned to…my perfume shelf? Indeed, better than a cupcake or a new episode of Dexter, sometimes perfume is my perfect picker upper.

Let me explain: I’ve always been that girl kind of interested in hair, make up and other girly pursuits. And in high school, when everybody was ballistic over the Body Shop, I discovered the magic of White Musk perfume. I dabbed it on daily, scrubbed with White Musk soap and slathered on the body lotion. It became my signature scent—in fact, shortly after arriving at a friend’s house one afternoon, his mother called down: “Is Astrid here?” I said yes, how did she know? Sure enough, she’d smelled the White Musk. (Now looking back, I realize perhaps I should have dabbed it on with a daintier hand given she could sniff my scent one entire floor up.)

Fast forward to my Friends years when I was early in my career and had moved in with my then boyfriend/now husband. My sniffer was becoming more sophisticated and I started slowing down at all the perfume counters I’d long walked past—Chanel! Eternity! Obsession! I eventually settled on a new scent that I (thought) I randomly picked out because I adored it—the classic Chanel No. 5. Since it was accessorized with a higher price tag than my beloved Musk, perfume became an occasional treat—birthdays, anniversaries, nights out with girlfriends. One afternoon I wore it when my parents arrived for lunch and my mother remarked she smelled Chanel No. 5, reminding her of her mother. Go figure it was my grandmother’s favourite scent as well.

Today, a little past Friends and more into Modern Family times, my Chanel, Obsession, j’adore and Intimately Beckham jostle for space on my perfume shelf. And yesterday, I spritzed on some spicy Obsession to boost the mood. It worked. I knew it would because it’s a trick I rediscovered on my maternity leave with my daughter, the year where I barely found time to wash my hair, wore milk-stained nursing tops and sporadically applied makeup. While thrilled with being a mom, I was less than thrilled with myself and I soon realized a little spritz would do me. With that little waft, it’d lift my mood and sometimes bring back fond memories of wearing Chanel to wind-swept dinners on a Caribbean getaway, or of Paris where I discovered Chanel Coco Mademoiselle. I couldn’t always take the time to wash my hair or style the perfect outfit, but at least I could smell nice.

Hmmm…if you’ll excuse me, I’ve got a bottle of Christian Dior’s Poison to open.