A healthy recipe for carrot cake oatmeal that tastes like dessert

As a teenager, I was a big fan of instant packets of oatmeal loaded with sugar. What’s easier than ripping open a packet, dumping it in a bowl, and pouring on boiling water? 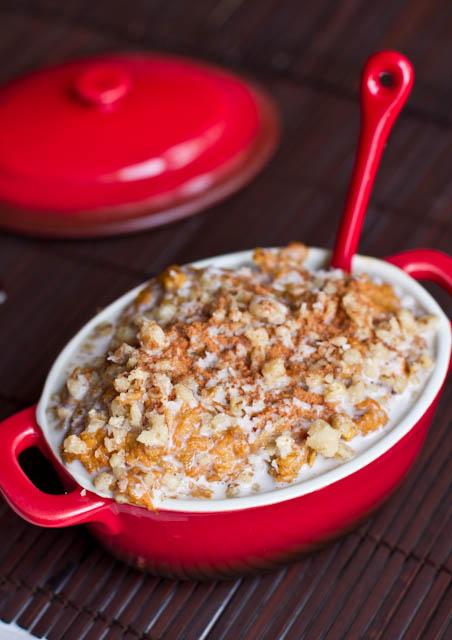 As a teenager, I was a big fan of instant packets of oatmeal loaded with sugar. What’s easier than ripping open a packet, dumping it in a bowl, and pouring on boiling water? It’s convenient, but it certainly didn’t do my body (or my energy levels) any favours. I was often starving in an hour and crashing by 10am.

In my mid-twenties, I decided to do away with instant oatmeal and its mystery ingredients and try my hand at making oatmeal from scratch. My first several attempts were quite awful — bland and lacking in texture. I almost gave up on making my own oatmeal, until I discovered that I had to make the oatmeal fun and exciting to enjoy it.

That’s when I started making all kinds of delicious oatmeal flavours based off of some of my favourite desserts. To name just a few, I’ve made comforting pumpkin pie oatmeal, apple pie oatmeal, and zucchini bread oatmeal, all with a goal of incorporating a serving of fruit or veggies into each bowl. Who doesn’t want to eat dessert for breakfast and get a serving of fruit or vegetables at the same time? I rest my case!

This carrot cake oatmeal is one of the most popular oatmeal recipes on my blog, and it’s also one of my personal favourites. It packs in a full cup of carrots and reminds me of the cake I know and love while still being a healthy breakfast. Last year, I made a large batch of this oatmeal and served it as part of a family holiday brunch. It didn’t last long!

This one is for all of the carrot cake fans out there! Creamy, crunchy, chewy, and sweet, this recipe packs in a full cup of carrots and a handful of healthy ingredients that will keep you feeling full for hours and hours. This oatmeal is also wonderful as part of a holiday breakfast with loved ones. If you are adapting this recipe for several people, I suggest pouring the oats into a large casserole dish when they are ready, adding your toppings, and using a large spoon to scoop portions onto plates or bowls.

Directions:
1. Finely grate 1 large carrot to make 1 heaping cup. You want to use the fine grate and not the large one so the carrot shreds are very small. This helps the carrot flavour blend in more without being overly noticeable.

2. In a medium sized pot over medium heat, whisk together the almond milk, optional coconut milk cream, cinnamon, ginger, nutmeg, and a pinch of salt.

3. Stir in the grated carrots and oats. Adjust heat if necessary or bring heat to low if it starts to boil. Cook for about 8-9 minutes, stirring frequently. When the mixture has thickened up, remove from heat and stir in the vanilla extract, 1 tbsp walnuts, 1 tbsp raisins, and 2 tbsp of maple syrup. Adjust spices and sweetness to taste. Remove from heat and portion into bowls.

4. Top the oatmeal with the remaining walnuts, raisins, and shredded coconut. If you are using coconut cream, you can mix a bit of the cream with maple syrup and drizzle on top of the oatmeal, as shown in the photo. Sprinkle with cinnamon for garnish.

Angela Liddon is the creator of Oh She Glows — a popular healthy vegan recipe website receiving over 1.6 million page views a month — and one of Chatelaine’s Women of the Year 2011. Angela’s passion for healthy vegan food is contagious and she’s eager to show others that vegan (and often gluten-free) food can blow your taste buds away.