10 things I learned about my fitness level from CrossFit

When I left work early to attend my first CrossFit class a few weeks ago, I was excited, apprehensive and nervous that I should’ve been prepping in the weeks prior. 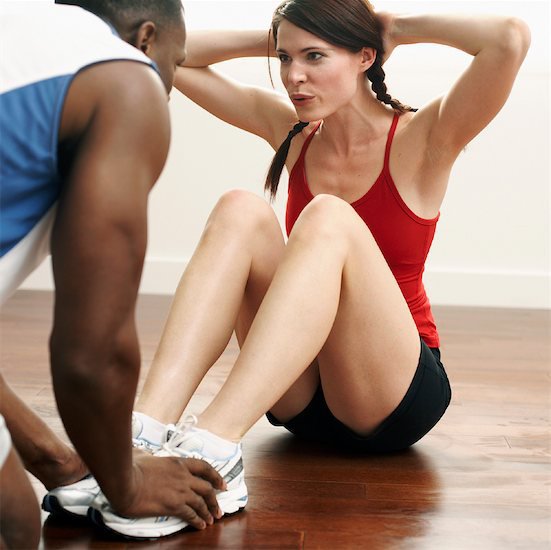 When I left work early to attend my first CrossFit class a few weeks ago, I was excited, apprehensive and nervous that I should’ve been prepping in the weeks prior. Known for its ability to move large muscles quickly, and often, I suspected my regular walking routine hadn’t quite prepped me. As I entered the small studio and didn’t see any tires, hanging ropes or military-esque training devices I felt a sense of relief, but boy did I misjudge what was about to happen. Over the course of the next hour I challenged myself — both physically and mentally — and successfully completed what I thought to be an impossible task.

Here’s what I learned:

1. Your workout is their warm-up. Not only did my instructor’s shirt say this, but I quickly realized that what I would’ve normally considered a workout was just the beginning. After jumping rope for five minutes, crawling like a crab and kicking my way across the room for a half hour, I could’ve easily thrown in the towel, however things were only getting started.

2. It’s all about the WOD. The workout of the day (WOD) is a combination of three exercises that in my case were burpees (hell), sit-ups and squats, which you focus on for the remainder of the class. Our instructor went through each one ensuring we had proper form and showing us more challenging alternatives if necessary (they weren’t).

3. Be sure to count. After we were shown our three exercises we officially started the session. We worked our way through each exercise moving down from 21 reps to 18 and so on down to a set of three. Having a number to focus on helped move the pace along and eventually boosted my momentum as I got closer to the finish.

4. It’s as much mental as it is physical. As someone who panics pretty easily, there were moments I could’ve easily called it quits. The indoor setting made me mildly claustrophobic but once I realized everyone was gasping as much as I was, I felt some relief and stayed extra close to my water bottle. Similar to my first attempt at hot yoga I imagine this eases with regular sessions.

5. You may surprise yourself. When our instructor Blair said we should aim to complete the whole pyramid of sets in 35 minutes, I’m not going to lie, I laughed. It seemed impossible I’d even walk out of the room without help, but when I completed the WOD in 35 minutes, 29 seconds I was pretty shocked. If I could’ve expressed joy at that moment, I would’ve.

6. Lunges suck, but they work. In between each WOD-set we did 100 feet of walking lunges. And though I tried to visual walking out of the studio with Jessica Biel’s rear, I left looking more like Bambi on an icy pond. My thighs and glutes were maxed out, but as Blair explained working the largest muscles burns the most calories. Noted.

7. Stretch. Though I doubt there was anything I could’ve done to prevent sore muscles entirely, I do regret not taking a few more minutes to stretch out my shoulders, butt and thighs. Though I did try to walk around as much as possible that night to prevent tightening up, the thought of stretching only got worse as time went by. Ask your instructor to take you through somestretches specific to your WOD so you know how to remedy any tightness.

8. Epsom salts are your friend. To say I was sore over the next two days is a massive understatement. I hurt in places I didn’t know existed and cringed with every step, literally. And though this is just as much a reflection of my fitness level as it is the intensity of this workout, it felt good to at least know I’d pushed my body that hard. I bathed in Epsom salts for three nights after the initial workout, which helped to reduce the inflammation in my muscles. And though putting on my shoes without wincing took a few days, I got there, only to crave that pain again.

9. Open yourself up. I walked into this experience thinking I’d be doing exercises learned from a farm-bred hockey player. I was certainly wrong. We used five-pound weights and mostly our own bodies for all of the exercises. There was no yelling, no rope climbing and a great camaraderie amongst everyone involved.

10. Fuel your body afterwards. Post-workout we were offered a smoothie to restore glycogen. Stored in the muscles, glycogen is used during intense workouts with short bursts of energy, as it’s the most readily available energy in the body. Replenishing glycogen ensures there’s no sudden dip in energy. The addition of carbs after an intense workout also stimulates insulin. Protein is another important element as it helps rebuild muscle tissue and aids the muscles in hydration. Try a smoothie with skim milk, half a banana, peanut butter, honey and your choice of protein powder.

FILED UNDER: 10 things I learned from exercise Fitness strength training