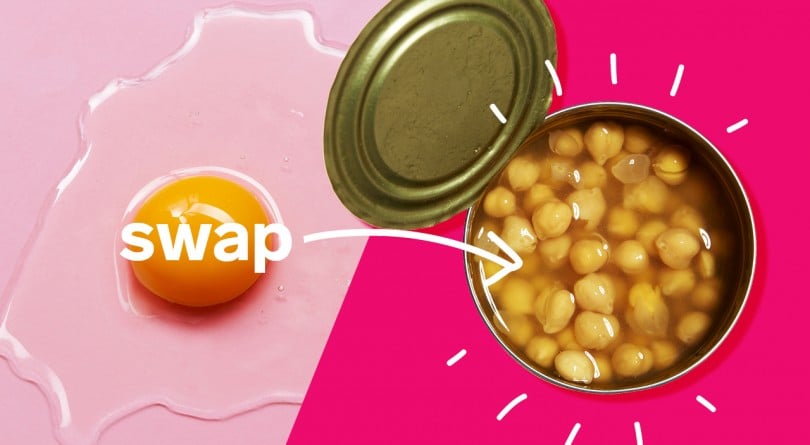 Vegan alfredo sauce? It might sound like an oxymoron. But award-winning entrepreneur Kailey Gilchrist makes a dairy-free version of this Italian classic and sells it under her NONA Vegan Foods line at big-names stores across Ontario, including Loblaws and Whole Foods. Instead of heavy cream, this alfredo sauce has a cashew base that makes it taste just as decadent as the real stuff.

Gilchrist knows veganism might be scary for some, but moving away from a meat-filled diet doesn’t have to be all that intimidating.

We asked this sauce boss to share some of her favourite (and most delicious) vegan kitchen hacks.

Fall in love with chickpea water

This simple egg white substitute is a bit unexpected, but chickpea water, or aquafaba, is a breakthrough for vegans like Gilchrist who love meringues. That’s because the liquid that usually goes down the drain once you open a can of chickpeas can be whipped up just like egg whites — literally use the liquid exactly as you’d use egg whites.

Not only does Gilchrist use it to make little meringue cookies, but she also uses it when she bakes. She calls it a double hack. “Use the chickpeas in your stir fry and then save the water and use it as an egg replacement,” she says.

You can also add whipped aquafaba into cocktails — such as whisky sours — that usually require egg whites.

Today at NONA we are making our largest Alfredo batch to date! When we first started in June 2013 we made 4 litre batches. Finally we worked up to 150 litre batches… and today, we attempt: 400 Litres! A massive cooking challenge followed closely by a large sales feat! 💪 #smallbusiness #entrepreneur #entrepreneurlife

Butter might be having its moment, but it’s still a no-no for vegans. But there’s another saturated fat on its heels—coconut oil. Gilchrist says swapping out butter for coconut oil works in both in sweet and savoury dishes and it’s also easy to find at supermarkets. Of course, plenty of other oils in your cupboard are also vegan if you’re looking for something with more of a neutral flavour (grapeseed oil is handy because of its neutral flavour and high smoke point for frying).

For extra flavour, however, Gilchrist turns to Vegan Magic. It’s a smokey, coconut oil-based product (that’s also by a Canadian entrepreneur) that makes her carbonara sauce taste like bacon. Gilchrist also uses Vegan Magic to make stir fries and says it’s delicious over popcorn with a sprinkling of nutritional yeast—another vegan go-to thanks to its cheesy flavour.

Gilchrist says she constantly fields questions about how she gets enough protein, even though she’s been vegan (and healthy) for more than a decade. There are myriad plant-based protein sources available, including legumes, beans, nuts and seeds, including hemp seeds. Gilchrist always has hemp seeds, which are filled with omega-3 fatty acids, on hand and sprinkles them on everything. Try throwing them in smoothies or mix them into a salad for an extra nutty crunch. Or, go all out and make your own hemp milk at home — it’s easier than you might expect.

Gilchrist is busy expanding her business at the moment, but she’s also considering starting a cooking class to teach others about going vegan. She made the lifestyle change nearly 15 years ago, largely thanks to her late mom.

She and her mom would spend time in the kitchen vegan-izing their favourite Italian recipes, including alfredo sauce. After her mother passed away, Gilchrist was inspired to start her company to continue spreading the “foodie love message,” her mom always shared by nourishing her family and friends.

Watch: The easiest way to remove corn from the cob