Ice cream is a particularly nostalgic food, and these two women are serious about their treat-making responsibilities. 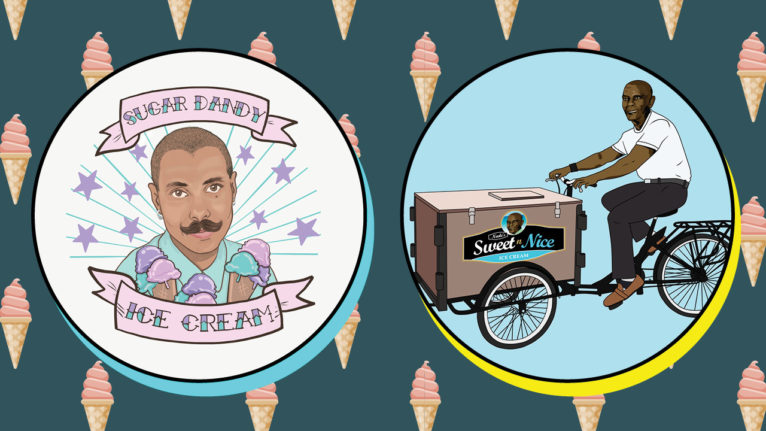 My mom’s face lit up a few weeks back, when I asked if she’d ever tried Sweet N’ Nice ice cream, since they’re both from San Fernando, Trinidad. It turns out that as a kid in the 1950s, she’d dash outside every time she heard founder Charles Neale pull up on his icebox trailer bicycle, sing-songing his sales pitch. “Sweet n’ Nice! Tell ya mudda Neale heah!” she called out to me, invoking her childhood version of the ice cream truck song.

Ice cream is a particularly nostalgic food—cold, rich and apt to stir reminiscences of indulgent grandparents and standout summers. And these are particularly nostalgic times, albeit a little bittersweet. A recent trip for a swirl of soft serve took me back two years to a weekend in Vermont, speeding across a lake in a friend’s well-worn motorboat with the urgent task of trying her favourite “creemee.” That’s what it’s called in that dairy state, where only deliciously high butterfat will do. Who knows when I might taste one again–or get a chance to see my friend of two decades.

Two Trinidad-born women making ice cream this summer both know they’ve got eaters’ hearts in their hands. The first is a professional: Rosemarie Wilson, Neale’s daughter and vice president of production at the Canadian version of Sweet N’ Nice, which launched three years ago and has just become available nationwide. The other is a hobbyist, Toronto’s photo laureate Michèle Pearson Clarke, who ramped up her past-time to spread much-needed sweetness during the pandemic. Both take their treat-making seriously.

Wilson knows she has big shoes to fill. Her father supported a family of 12 children with a beloved product, and it wasn’t just ice cream that made a permanent impression on his fans. My mom remembers Neale handing out scoops to every kid crowded around his bike, even those who didn’t have a nickel. “He loved children. He would never deny a child who wanted some ice cream,” says Wilson.

Tropical flavours like rum and raisin are dear to immigrants’ hearts, and Wilson hopes to meet their expectations. “I want to get as close as possible to what I know back home, when you take that original coconut, crack the nut, hand grate it, squeeze the milk out, right?” says Wilson, of that iconic flavour. “I want to get the real cream from the coconut, because I know anybody from the Caribbean, this is what they’re looking for. They will critique it.” It’s easy enough to get the global flavourings she needs, she says, but finding the perfect ingredients takes tasting and time.

Clarke, on the other hand, steers away from coconut (and mango) in deference to her ice cream mentor, an uncle in Antigua who pulled out his “old school churn-like machine” when they visited. “It is a very powerful early memory for me, of my uncle being like a wizard,” says Clarke, who goes for more esoteric mixes, like orange-cardamom, or salted watermelon. “I wouldn’t make coconut, because that to me is the most classic flavour.”

The photographer started making ice cream as a hobby about five years ago, then ramped it up last fall, after befriending a chef who called on her to make dessert for dinner parties. By the beginning of the pandemic, she was in full swing, and began gifting pints to friends and neighbours. “To give out joy and comfort and indulgence during quarantine life is a nice thing to do, you know?”she says.

Much of Clarke’s work involves understanding grief, particularly her 2015 video installation, Parade of Champions, which was inspired by the death of her mother. It’s an emotion she thinks we’re all overwhelmed with right now. “I think that the urge to create and bring something into the world is very much a way to cope with grief,” she says, about the frenzy of sourdough baking, tie-dyeing and garden planting that spread alongside COVID-19.

Clarke dubbed her line Sugar Dandy. Always concerned with the visual, she asked graphic designer Lauren Hortie to come up with a logo. Wanting to couple its social media unveiling with a good cause, she put up her ice cream as the prize in a raffle benefiting a pandemic fund organized by the Toronto Prisoners Rights Project. The $2,360 she raised will go toward PPE for people who are currently incarcerated (and at extremely high risk of contracting COVID-19), as well as stipends for those who have received early release.

Here, she shares a recipe for her Maple Butter Tart Ice Cream, as well as some tips for newbies. If that’s intimidating (or too much work), Sweet N’ Nice is available at supermarkets across Canada. Mango fans need not worry that Wilson’s creation will disappoint–she tasted a lot of purees to find the right one. “I wanted to make sure that it gives the taste of literally biting into the fresh mango off the tree,” she says. My mom did a taste-test and approves, and says Wilson got guava right, too.

I, for one, plan on eating a lot of extra ice cream this summer. It’s a year that none of us will forget, and at least some of the memories should be sweet ones.

Sugar Dandy founder Michèle Pearson Clarke recommends starting with a coconut milk or condensed milk base to get a few successful batches under your belt, before moving on to attempt the custard base. That requires cooking the egg yolks, which can be a bit intimidating at the beginning. She also highly recommends using a candy thermometer for Step 4 when you get there, to reach exactly 170 F.

1. To concentrate the maple flavour, bring the maple syrup to a simmer over medium heat in a small saucepan, and let it reduce down to approximately 3/4 cup, or use as is for a milder maple flavour.

2. Add heavy cream, milk, cream, and salt to the saucepan; mix just to combine and dissolve salt, about 2 minutes and remove pot from heat.

4. Return the yolk/cream mixture back to the saucepan and gently cook over medium-low heat, stirring or whisking constantly, until custard thickens enough to coat the back of a spoon, and reaches 170-175 degrees on an instant-read thermometer.

6. Churn and freeze the custard in an ice cream machine according to manufacturers’ instructions, adding in the chopped-up butter tarts in the last few minutes of churning.

7. Transfer churned ice cream to an airtight container, and freeze until firm, about 3 hours.

8. Serve with an additional splash of maple syrup, and a pinch of Maldon sea salt.